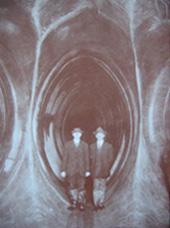 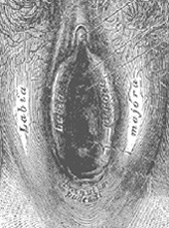 In the summer of 2003 the New York City MTA and the Department of Environmental Protection placed posters featuring archival photos of early-20th-century New York City projects (bridges, waterworks, etc.) inside city subway cars. My favorite, for pretty obvious reasons, was the one of the Catskills Aqueduct circa 1913. In this image we see five men standing in the mouths of three symmetrical ducts branching off from a larger one (or perhaps merging into one). It wasn’t just the stunningly vaginal quality of each aperture that caught my eye: it was their eerie resemblance—especially that of the middle one, which I show here—to the frontal view of the female genitalia in Gray’s Anatomy. The proportions and reflective highlights match up nicely, and the symbolic stuff is pretty obvious: life springs forth from both water and womb, mammalian life depends on both, many humans enjoy spending time in water and in vaginas, and so on.

I can’t imagine what Mr. Clem is talking about. But then … I am reminded of the old story—in fact, I include it in the book—about the guy who goes to the shrink, desperate for relief: “Doc, Doc, you’ve got to help me, I can’t take it anymore. My problem is—” At which point the doctor interrupts him: “No, no, don’t tell me. I’ll give you a little test here and I’ll be able to tell you what your problem is.” He pulls out a sheaf of placards from his desk drawer and shows the patient the first—which portrays a simple pair of straight, parallel vertical lines—asking him, “What’s this?” “Oh my God,” says the guy, “it’s two people, a man and a woman, and they’re necking, and yecch, it’s disgusting.” Hmm, thinks the shrink as he scribbles a note on his clipboard. “And this?” (Another two lines, this time horizontal.) “Ach, Jesus!” exclaims the patient. “It’s the same two and now they’re in bed, they’re having physical relations, intercourse, and, aye, it’s completely revolting.” Hmmm, thinks the shrink as he jots himself another note. “And this?” (Another two lines, this time crossed.) “Oh my Lord, dear God,” stammers the patient, barely able to continue. “It’s the same couple and this time, I can’t even say it, they’re … they’re—” “Sir,” interrupts the shrink, “we don’t even have to go any further. I can already tell you what your problem is: You, sir, have a pathologically dirty mind.”

“I’ve got a dirty mind?” the patient explodes. “You’re the one showing me the dirty pictures!”