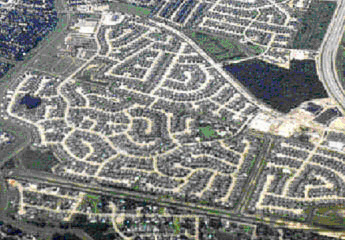 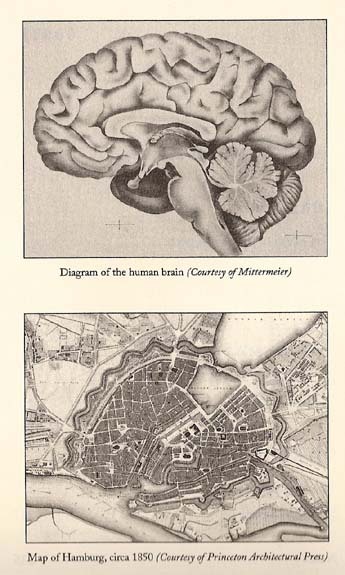 It’s offensive that “noodle” is such a fitting description of our brains. Noodles are limp, wet, and dull, qualities I’m much happier attributing to suburbs. Sprawling, cul-de-sac-filled suburbs take on the look of noodles by trying to cram houses into quiet streets devoid of through traffic. Usually, this cramming creates streets and houses that look eerily similar, although you can be sure that there are some bizarro deviants—both saints and socks-to-bed fetishists—living in samey suburbs, just as there are wildly different thoughts lurking in similar-looking mee gorengs of gray matter.

What scares me about suburbs, though, is the potential they have to constrain our thoughts. We build our brains with physical bricks, choosing how much omega-3 and zombie flesh we eat, and decorate them with experiences, selecting what to read and see and flirt with. But, of course, our brains are active in making these decisions. Our brains construct themselves. Similarly, we have a say in the design of our living environments, but once we’ve moved in and started whacking weeds and peering over fences, where we live begins to make decisions for us. It determines a large portion of our day-to-day stimulation and interaction. How diverse and deviant can we be if we’re all living the same lives in the same houses on the same streets?

It’s no mere coincidence that both “cul-de-sac” and “dead end” can be used metaphorically to mean a line of thought that leads nowhere.

Mee goreng, you Sam indeed. I can’t remember where (hmmm) but I seem to recall somewhere having read Alzheimer’s described as a series of successive power outages spreading across the suburbs of a person’s mind. And then of course there’s Auden in memoriam of Yeats:

But for him it was his last afternoon as himself,
An afternoon of nurses and rumours;
The provinces of his body revolted,
The squares of his mind were empty,
Silence invaded the suburbs,
The current of his feeling failed; he became his admirers.

On a perhaps less doleful note, I am also put in mind of the late Donald Barthelme’s marvelous short tale (included in Sixty Stories) entitled “I Bought a Little City,” which launches out jauntily, “So I bought a little city (it was Galveston, Texas) and told everybody that nobody had to move, we were going to do it just gradually, very relaxed, no big changes overnight.”

“What a nice little city,” the narrator presently finds himself thinking. “It suits me fine.”

Next paragraph: “It suited me fine so I started to change it.” He tears down a whole neighborhood and then decides he now must build up a whole new subdivision in which to house the evicted homeowners. But he’s stumped as to how to proceed designwise, that is until his friend Bill Caulfield deftly cuts the knot: “He showed me a box. I opened it up and inside there was a jigsaw puzzle with a picture of the Mona Lisa on it. ‘Lookee here,’ he said. ‘If each piece of ground was like a piece of this-here puzzle, and the tree line on each piece of property followed the outline of a piece of the puzzle—well, there you have it, QED and that’s all she wrote.’”

Which is precisely what they proceed to do … "and it didn’t work out badly. There was only one complaint. A man named A.G. Bartie came to see me.

“‘Listen,’ he said, his eyes either gleaming or burning, I couldn’t tell which, it was a cloudy day, ‘I feel like I’m living in a gigantic jiveass jigsaw puzzle.’

“He was right. Seen from the air, he was living in the middle of a titanic reproduction of the Mona Lisa, too, but I thought it best not to mention that. We allowed him to square off his property into a standard 60 × 100 foot lot and later some other people did that too—some people just like rectangles, I guess. I must say it improved the concept. You run across an occasional rectangle in Shady Oaks (we didn’t want to call the development anything too imaginative) and it surprises you. That’s nice.”

As indeed it is: damn but that Barthelme could write! He, too, has become his admirers.