In the wake of watching the horrors in Charlottesville, Virginia play out on our televisions, many comedians became our commentators. Our collective conscience. Saying the things that our leaders couldn’t. Or wouldn’t. It brought to mind one of my all-time favorite comedy albums. Dick Gregory at Kent State. The bold double LP was recorded before the student body of the Ohio university, still reeling from the senseless loss of life of political protesters at the hands of the National Guard on the school’s campus in May 1970. It’s more than a comedy record. It’s brilliant and inspired oratory. But of course Dick Gregory was more than a comedian.

Somewhere in between the trails blazed by Lenny Bruce and Dr. Martin Luther King Jr. is Dick Gregory. Both satirist and social activist, Gregory was more overtly political than Bruce and funnier than Dr. King. And while history heralded those two magnificent martyrs whose lives were lost less than two years apart from one another in the turbulent 1960s, Gregory was a contemporary of both men who continued to talk the talk and walk the walk until we lost him this past weekend.

Gregory had virtually no predecessor. A small handful of black comedians had released comedy albums before his 1961 debut LP In Living Black and White. Redd Foxx. Nipsey Russell. Moms Mabley. But none were overtly political. And none had found a way to bring an authentic black perspective to mainstream white audiences. As Gregory liked to say, he dared to stand “flatfooted” in front of white audiences and talk directly to them.

When “Greg”… as many of his friends called him… recorded that first album at the Playboy club in Chicago, he was only 28 years old. Already well established as an important and provocative new voice in comedy, he commented on the LP about how he was being called “the black Mort Sahl” in the press. Greg joked that, “in the Congo papers, they call Mort Sahl the white Dick Gregory.” His jokes on the civil rights movement had a bite and a rage to them that were belied by Greg’s easy-going style. His delivery was the epitome of cool and the antithesis of the smiling, tap dancing Negro performers white audiences had grown accustomed to seeing. He even had the audacity to take on white hecklers, once firing back, “Trying to get you to shut up is like trying to explain integration to a lynch mob.”

Much has and will be written about how Gregory famously passed on Jack Paar’s invitation to appear on the Tonight Show because black comedians were not allowed to sit down with Paar. (Paar conceded and Gregory did appear and did sit down with him.) More has and will be written about Gregory’s landmark autobiography, which he entitled Nigger with a dedication to his mother saying that every time she heard that word from that day on, they were just advertising his book. From arrests and attempts on his life, Greg’s absolute commitment to social justice will stand as his legacy even over and above his comedy. But what probably will go under-reported and under-appreciated was how real, authentic and accessible he was. He loved to engage, one-on-one with real people, giving his phone number to anyone who asked for it. He never stopped traveling, observing, reading, watching, listening, reaching out and reaching back right up until he fell ill just a few days before his passing.

I first met Greg on a movie set about fifteen years ago. My friend Carr D’Angelo was the producer of the film and knew how much his work meant to me, so he invited me to come and hang out while Greg filmed. I sheepishly asked if I could bring a few LPs to get signed. Carr said yes, not anticipating that I would be bringing eleven albums. But Greg didn’t mind, chatting as he autographed the lot with his trademark inscription: “To You, From Me.” When he got to the Kent State album, I remarked that it was my favorite. Genuinely curious, he asked why. I told him that it moved and inspired me. That I had loved his material about the inherent corruption in our two-party system and how if we were “one nation under God, our God is the green Jesus.” We also discussed the centerpiece of the album, his extended metaphor using the movie Frankenstein to illuminate the inherent dynamic between white and black America. In the bit, Greg explained how the film’s scariest character was Dr. Frankenstein because he was the one who dug up the “monster” and turned him into something frightening. I told him how I often quoted that routine and had even used it as the basis of a film school term paper on morality in classic horror films. Greg just smiled and gave me a little side-eye as he finished signing. Then he slipped me his business card, which bore only his name and phone number. “Call me anytime, brother.”

Through the years, I would call Greg from time to time. Just to talk. And we talked about everything. He never failed to be up to the minute on every aspect of every news story and had a point of view that was usually pretty far from the mainstream. I didn’t always agree with him but I always wanted to hear what he had to say. And after the passing of both Richard Pryor and my dear friend Jonathan Winters, Greg’s perspectives on each were warm, unique and personal. Remembering those conversations makes me that much sadder that I don’t know who to call today to talk about him.

I have always felt that it’s the job of the comedian to see things differently and yet with total clarity. From the most mundane observations about food/airplanes/popular culture/etc. to our most intimate inter-dynamics as individuals and as groups of people, the comedian seeks a truth from his or her unique perspective and communicates it in a way that makes us laugh and, in doing so, gets us to agree with them. That’s what laughter is. Agreement. It’s a superpower and, as such, I have always regarded the comedians who had the greatest impact on me as heroes. And from the first moment I was exposed to the powerful work of Dick Gregory, he became a major hero of mine. And he always will be. 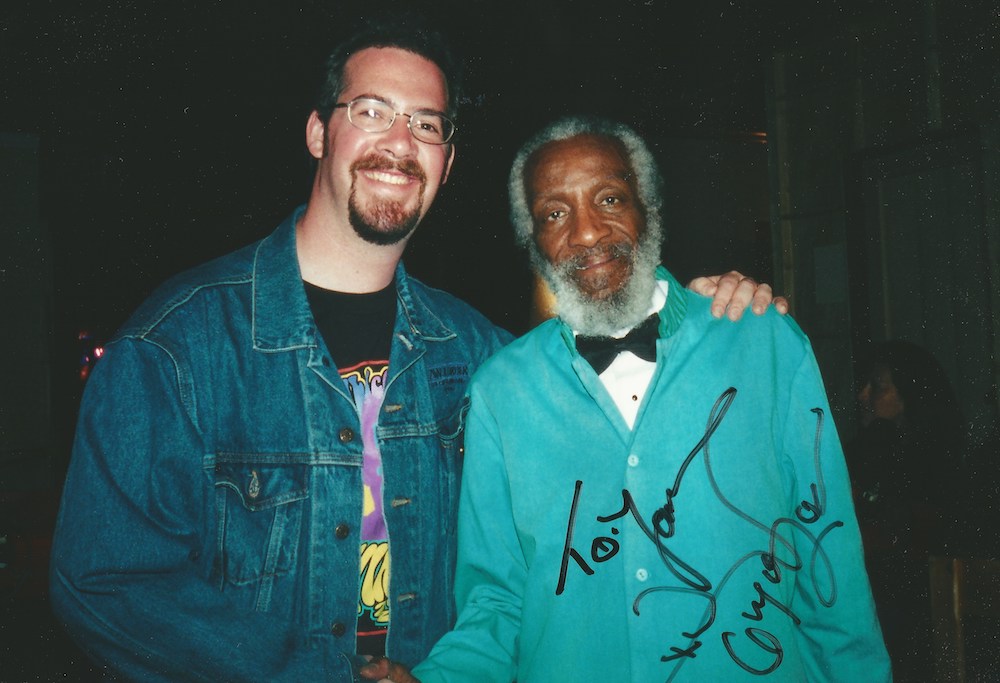