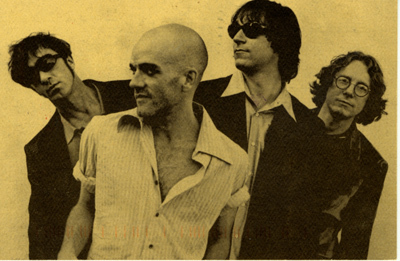 Hope is so easily puffed into the air, like a Zemeckis feather.

When our rock band broke up in the mid-90s, I had a bunch of songs that hadn’t been recorded. I invited several musician friends and the remnants of the band to join me as I used my VISA card to run up a ridiculous bill at a studio that the local “indie rock” community sort of orbited around.

My triumph with that project was to induce Dale Lawrence, half of The Vulgar Boatmen’s songwriting team and leader of its Indianapolis branch (the Boatmen have a somewhat complex structure), to sing lead vocals on two of my songs. I had a lot of great and generous friends help me with the album for free—and am grateful to every one of them—but Dale was my “get.”

We all just knew that The Vulgar Boatmen were about to break—they’d gotten four-star reviews in Rolling Stone, and über-critic Griel Marcus loved them eloquently. Their songs were literate and elusive and beautiful, and their live shows were transcendent.

Still are, by the way.

Record company mismanagement has left them with a small audience of enthusiasts who are bitter on their behalf (I detect no bitterness in Dale when I see him around occasionally). But at the time, the fact that our band opened for The Vulgar Boatmen a number of times, including a magical night in Chicago as their popularity there peaked; and the fact that I played accordion onstage with them fairly often; and, then, finally, that Dale sang on my solo album—these were all occasions for Great Hope.

I really thought something was going to happen.

Which would have been nice, since I’d spent so much money.

In an attempt to accelerate A Happening, I tried to think of “indie rock” people I admired, or who might be sympathetic. I thought of Mike Mills: songwriter, melodic bassist, and plaintive backing singer for R.E.M. Based on the clues that rock journalists and R.E.M. albums make available, he seems like a good guy.

I sent Mike Mills a tape.

Then my wife and I moved to St. Louis so I could work awhile at a different ad agency. While we were there, we had a baby.

Here is a metaphor I have developed to recite on bill-paying nights, a metaphor for the next decision we made: it’s as if we went to LifeMart, and shopped, and found on the shelves a box labeled “She Stays Home With the Baby.” We both decided we wanted it more than anything. We took it up to the checkout counter and put it on our VISA.

Hope is bullish on the future.

We moved to Minneapolis and had another baby. Marj (my wife) remained home. It was an absolutely mutual decision.

The Vulgar Boatmen continued to not get famous.

I was working at a Minneapolis ad agency now, making almost enough.

Then, one early spring day in Minneapolis, I got a postcard from Mike Mills, forwarded from our St. Louis address. It was a genial, encouraging, good-guy postcard (he could have sent me nothing at all). But it had a mysterious element; he’d started to write some kind of criticism of my solo project (which I’d dubbed “Marj’s Basement”).

This is the handwritten text of the post card, postmarked from fabled Athens, GA:

Dear Charlie,
Thanks for the Marj’s Basement cassette. I enjoyed several tracks […]

Okay, this is where Hope is tested. Because the next writing on the card is a scribbled-out comma and three or four black-ballpoint-obliterated words, the first of which I have determined is “though” or “although.”

MIKE MILLS WAS ABOUT TO OFFER ME ADVICE FOR MY BAND. Could I have withstood it? Would it have crushed me? Would it have made me excited and inspired to return to the studio to amend and improve my work?

Because he changed his mind, redacted his critique, and bailed: 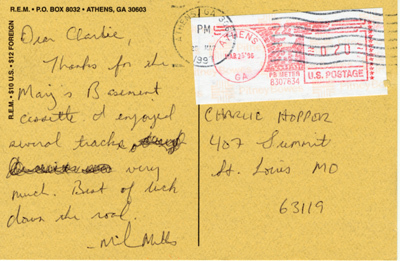 I WILL NEVER KNOW. I will never know.

Hope, having nothing better to do, elevates slightly: at least Mike Mills thought it was worth responding to.

(sigh) The Vulgar Boatmen finally gave up being famous. I now happily focus on being a Creative Director in advertising. I’m privileged to work with the people I work with, and plan to do so until I’m 84 at which point I will walk in some Monday morning and drop dead of a heart attack because I will never have enough money to retire.

The VISA company will be honestly sad to see me go.

And yet! But wait!

Here I am, now, trying to sell a country song.

Imagine, then, the thrill of standing in The Dollar Tree with me one Saturday night just before Christmas, and getting An Encouraging Text Message.

The kids and I were there because we have a white elephant exchange at my in-laws for Christmas every year, and the tradition is for me to take the young’uns to Dollar Tree where they assemble “themed bags of crap” (my term) to set around the fireplace for the exchange—for example, one of our themes this year was “Things You Would Need To Clean Up A Grape Juice Spill, Including Grape Juice.” Each bag contains useful stuff and silly stuff, and ends up costing 5 or 10 bucks.

My pocket buzzed. I looked at my iPhone. It was a text from my Nashville friend Olivia West, who organized and sang a couple demos for me last year, including a song I wrote called “Under Her Porchlight.”

“My songplugger wants to plug ‘Porchlight’ for you. If she gets a cut she gets half of the publishing. Can she do it?”

I sent back: “Now wouldn’t that be a merry Christmas. Sure!”

She: “You’ll have to email me to that effect for her sake, but she’ll be thrilled. She hears Faith Hill on it.”

Me: “Well! Thanks to you and your songplugger this holiday season…!”

I don’t mind counting unhatched chicks: c’mon kids, add a few more items to each of those dollar store gift bags. What the hell!

Because, being the thing with feathers, Hope can be sent soaring with just one little puff of air.