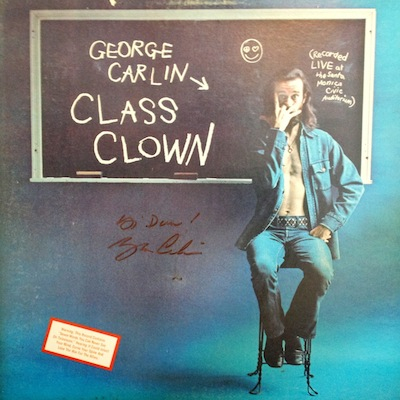 When it came to stand-up comedy, George Carlin was my idol. By the time I was 12 years old, I owned and had memorized every one of his albums. The release of a new one was an event. I first saw him live when I was in high school during his “A Place for My Stuff” period… which I now regard as his least-inspired era. But saying that is like saying that Magical Mystery Tour is my least favorite Beatles album. It’s a pretty high low point. And at the time I never thought anyone else would ever make me laugh as hard. I also would never have dreamed that I’d meet, let alone work with this comedy god just a few years later.

I wasn’t even 20 when I got to open for George at Jan Smith’s dearly departed Igby’s comedy club in West LA. I was about two or three years into doing stand up, and I had no business sharing the stage with the man. But I guess I did well enough to earn his respect because we talked for a while after the show and we exchanged phone numbers. He told me to keep in touch. That we were “brothers in arms.” If I had died that night, the coroner’s report would have listed “blown mind” or “pure joy” as possible causes of death.

George and I would occasionally talk on the phone. Not often enough that I would have considered us friends, but just often enough that I walked around feeling like “Wow, I KNOW George Carlin.” One thing he would do was to call me up and begin to tell me a story. Cold. No context. He’d just launch into a long yarn. A shaggy dog story that would almost always pay off with a terrible pun. And by terrible, I mean wonderful. I would realize what had just happened and I would burst out laughing. Then George would hang up. The first time this happened I called him right back to say that we had been cut off. He explained that we hadn’t been cut off… he was just getting off on the laugh. I laughed twice as hard… and then he hung up again.

Years later, my friend Paul Provenza and I were writing a project together, working out of my house in Manhattan Beach. One night we learned that George was performing down the road at The Comedy and Magic Club in Hermosa Beach and we decided to play hooky from our work and go. Our friend and fellow comedy comrade Rick Overton came along. The three of us sat there, marveling as this master-craftsman, still at the top of his game, burned for over an hour. And afterwards we went backstage like a trio of teenaged groupies. But George treated us like peers. Like “brothers in arms.” He was getting ready to do a spot on the Tonight Show in a few days and asked if we wanted to come and hang out. Of course we did, and of course he was brilliant. It would be the last time George would appear on the Tonight Show.

Not longer after, I was living in Atlanta and my friend Mark Krantz told me that George had been selected to receive the Mark Twain Prize at the Kennedy Center in Washington DC. I was thrilled for George and planned to attend the ceremony. Weeks later, at age 71, George was gone. I was devastated. Not because I had lost a close friend. We didn’t know each other all that well. But I had lost a touchstone. A beacon. The decision was made that George would be the first to ever receive the Twain Prize posthumously and my wife and I made the trip to DC to be in attendance. I laughed and cried that night. I also met George’s daughter Kelly for the first time at the event. I hugged her and told her that she wasn’t an orphan because the comedy community would adopt her. A beautiful and brilliant mind in her own right, Kelly has come to be hugely important to me. She once called me her “life coach,” which I took as a great honor.

On what would have been George’s 72nd birthday, the first one falling since his passing, an evening that was a salute to George was held at The Comedy and Magic Club in Hermosa. Kelly invited me to perform on the line up with Provenza, Larry Miller, Kathleen Madigan, Roseanne, Kevin Nealon and Garry Shandling. There I stood, on the stage where I last saw George do that great long set, and once again, I felt inadequate. But I knew how to get a guaranteed laugh. I quoted George’s line about why people live at the beach. “Because you only have assholes on three sides of you.”

Today, October 22nd, the block where George grew up is being dedicated as George Carlin Way. I will be there, paying reverence to the master of irreverence.

McSweeney’s is now a nonprofit and we would greatly appreciate your help. Click the button to donate. Thank you!