This piece originally appeared in McSweeney’s 55. Get 15% off with the promo code issue55. 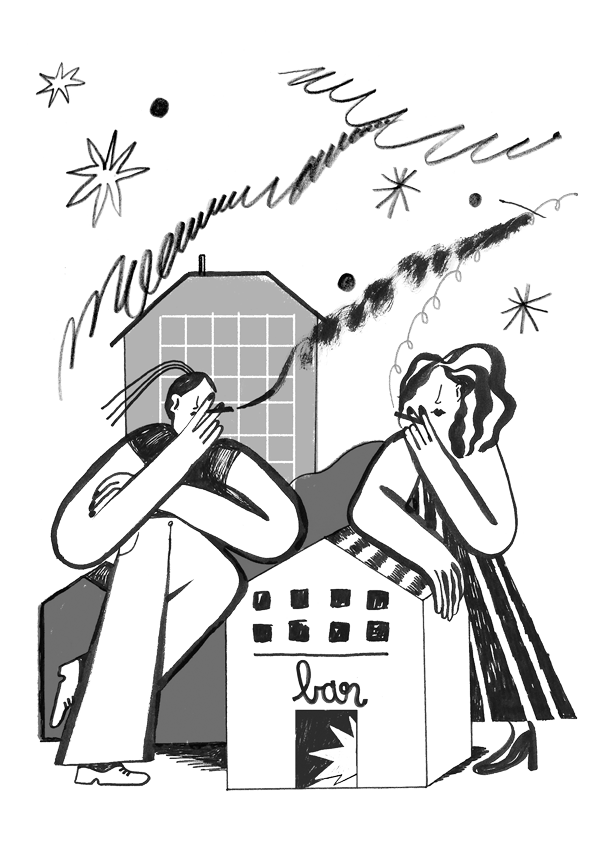 Maybe it was only the mood I was in that night—bitter, biting, yet full of loose energy—that led me back to the queer bar, a place I’d sworn I’d never go again. By then I had no grand hopes left for love, but was propelled instead by quite another purpose: I wanted a friend. Not just any friend. I wanted the friend, the friend who is the stuff of movies and books and love songs—the friend who sees, the friend who gets, the friend to whom you have to explain nothing and who is yours until the end of time.

All afternoon and into the gloaming, I’d been sitting in the dark, watching my screen and polishing off a bottle of screw-top rosé, precisely the kind of blissful combination my other self disapproves of. What was the deal with Tony Soprano, finally and after all? So beautiful, so angry.

Then it was time to go. On the metro, two girls sat side by side in matching floral dresses and cursed each other over tiny hands made of butterfly wings. The exit tunnel and escalator smelled like important documents burning, which is the best description of Paris as a whole that I am capable of offering.

My potential new friend was a woman I’d met on Twitter when she’d liked a picture of my cat. Cute cat, she’d commented. What’s his name?

I told her his name—yes, like the angel—and she launched into a monologue about the Holy Trinity, which is my actual favorite subject to debate. Three into one, one into three. It makes no sense, yet it makes sense. I agree, utterly and totally, this woman said. In her little photo, she wore a droopy yellow bow in her hair. Here, I remember thinking, was a person who did not play by the world’s rules.

As usual, the filmmaker and her girlfriend stood in the street outside the bar smoking the cheapest possible kind of cigarettes. They greeted me with kisses in a tired kind of way, turning their faces to mine so that only the corners of our chins touched. Once upon a time, I had caused a lot of trouble here, both emotional and physical, so I understood their loyalty.

The signs asking for donations to fund the bar’s legal fees had come down, and I wondered what this meant. The bar had opened in a disreputable neighborhood that over time had become reputable, triggering a campaign from its new neighbors to close it down for reasons of sound and sexuality. But this argument does not play out the same way in France as it would in America, I have learned, for though the French surely have their own confusions of object and symbol, they are generally unimpressed by binary thinking. It’s an immunity I am still trying to acquire.

Over my large plastic cup of good beer, I watched the butch-femme couples kiss each other with their tender fish mouths and surveyed the gaggles of androgynes in vests made from various shades of denim who occupied the couches in the graffiti-soaked back room. I had the feeling again then, the only feeling that makes my other self shut up and listen.

Once, as a teenager in Virginia, after feeling the feeling for a whole year, I drove to a shooting range/gun store and looked at the big sign. GUNS, it said, ALL SHAPES AND SIZES. My friend’s older brother worked inside, and I knew I could be successful if I wanted to be. Success, in this context, would be a lovely rectangular gun, very small and possibly silver, held to the right side of my head and fired. Did I want to? My other self was silent as I sat in the car and silent when I pulled the car back onto the two-lane, back onto I-95 and through all the miles home. The decision was mine.

According to the clock above the bathroom with pictures of cats for numbers, my potential new friend was late. I saw one girl I thought was cute, in a black denim button-up onesie—little tits, no bra—which was just the kind of garment I would like to wear but never would. By the time you got the pants on and fastened in just the right way, you’d have no energy left for the top.

Here is the thing: I had a friend once, for three years. One day it was all, Let’s write our names on a cheap gold lock and lock it to this bridge. It was I who went to the hardware store and bought the lock, but she who wrote the initials in Sharpie and plopped the little key into the water. To be fair, the lock was so cheap that the U of it kept coming out altogether, so I helped my friend jam it back in once it was around the thin iron trestle. We also wrote vows, promising to bring more joy into each other’s lives rather than less and to remind each other that we are both special and talented and destined for great things. This is a kind of marriage, I said, and it means we are together now, until the end of time. Okay, she said.

Maybe I should have better clarified the terms, or even then picked up on my friend’s tone of hesitation. But there’s a reason for that extra F—it’s not “best friends for now, until we tire of each other.” Object permanence, my other self was fond of telling me, is not your forte. She may have been right, that other self. Yet here is what she did not know: people leave. People quit. People pack up and move on.

Later, my ex–best friend forever stayed at my apartment for five days while deciding whether to begin an affair with a man who was not her husband. My cat purred between her breasts. It’s been so long since I’ve felt free, she said. I’ve never told anyone these things before, she said. I know, I said. We ordered noodles delivered by an Italian man on a slick red scooter and it was she, not I, who made the smart and mocking comments about the likely size of his cock. We watched a movie about the Italian mafia, how it extends its tentacles into every corner of Italian life, even into the trash cans and the gardens. Do you ever feel, she said, that your body is like a garden full of trash, and that the longer you live, the more trash you dig up, until you think you are done digging up trash and then you dig up the biggest piece of all? Yes, I said.

All that night, as my ex–best friend and I lay turned away from each other in my big bed, my other self spoke to me in aphorisms. Keep no secrets, tell no lies; love is a verb, not a noun; if you love someone, set them free. I didn’t know how exactly these related to my situation, but I listened to her words, took what I wanted, and left the rest. I understood that there were some things—marriage, for example—against which, if I fought, I would lose every time.

In the morning, my ex–best friend was no closer to a decision, so it was I who sent her packing back to her husband with half a loaf of the banana bread we’d made. Meow, the cat said when she left with her big, shiny backpack, which protected all her most important belongings from the elements. Her grid-lined notebooks and her Muji pens and her big jade necklace and her tarot cards and her rock that I had given her, which absorbed her sadness. Meow, the cat said again, when she called to say she had decided to stay with her husband and marry him again in her mind. There was static in the connection, my other self trying to speak. I ignored it. But what about how he tramples your spirit? I said. I never said that, she said. Hadn’t she?

First came the series of small miscommunications, then the one bad lunch at the bakery, then finally the email: Never call me again. Don’t text. Don’t tweet. Don’t like me, don’t tell my story, etc. I know I am no picnic to love, that much has been made abundantly clear time and again, but this I thought I would never, as long as I lived, understand. What kind of person slams the door on love in so loud a manner, plus so quick, and forever? What kind of person puts all their vital blood into a single arm and then cuts off the arm? Whack, whack, whack.

There was no continuity, there was no longevity, there was no forgiveness, it seemed. The snake did not eat its tail but instead kept eating pieces of experience and shitting them out. I felt like that snake—renewed and empty, with no direction to go but forward. How many times had I moved, how many cities had I ploughed through, in the decade between childhood and real life? Paris was the fifth or the sixth, depending on your definition of residency.

While I sat waiting, I drank my big plastic beer and then I drank another and I listened to the music play. The clock had left its position at the orange cat and now pointed to a gray Maine coon cat with a luxurious white tail. I opened the glass door and stood in the street. The bouncer had taken off her suspenders and they fell onto her big thighs like strange and beautiful shackles. I asked the filmmaker if she had a cigarette. She gave me one and even offered to light it for me.

Where have you been? she asked, without too much meanness. We’ve worried.

Oh, here and there, I said. The university has been on strike so I’ve been listening to all the speeches.

Don’t listen too hard, she said. Eventually, it’s just the same guy, over and over again.

She smiled. Viens avec nous, she said, gesturing to her girlfriend and then down the street. We’re going for falafel. She crushed her cigarette beneath her Converse shoe.

My ex–best friend forever called these Chuck Taylors because she is from the Midwest, though there could have been some other reason.

I can’t, I said. I’m waiting for someone.

I watched them turn the corner and then I watched two baby dykes make out furiously against the dirty window of the laundry next door. The streets were dark and friendly and the world was truly huge and glittering, I remember, despite the way it had been treating me.

She never showed, that new friend. Later, a message appeared saying that she had been caught in a terrible rainstorm (she was taking the metro in from les banlieues) and asked if we could reschedule—a rain check. Ha ha ha, my other self said, what a dumb joke. No, I wrote back.

I never did find another friend like the one I’d lost, and if I had known that then like I know it now, I would not have continued living. But it is possible, I have discovered, to supply that kind of friendship to oneself, if you work very hard at it, and practice every day. I’m doing it now, even as we have been talking all this time, even with you here.

Get this story and more over in our store.