Sixteen years ago, in March 2003, I was at home in Charlottesville, Virginia, with my two-month-old daughter. She was my first baby and between sleep deprivation, lack of confidence, and a snowy late winter with storm after storm blanketing the town, it seemed treacherous to go outside. My husband and I had only recently moved from London, where we’d spent three busy, friend-filled years, to Charlottesville, which seemed by comparison small, isolated, and empty of friends.

My lifeline those late winter days was my computer. This was the pre-social media age: Facebook wouldn’t launch until the following year. There was no Twitter. No Instagram. No texting. But people did email and the messages were longer than they are today, sometimes even with a picture attached because that is how you shared pictures with friends then. Blogs were big (thank you Maud Newton and Mark Sarvas and Alexander Chee), and there was also McSweeney’s Internet Tendency, which I’d loved for years.

And so it happened that I opened my laptop one day in March for my daily dose of humor to see instead an unusual screen on the McSweeney’s website. MEMORIES OF AMANDA DAVIS was the heading, and then a letter began.

On the afternoon of Friday, March 14, a plane carrying Amanda Davis and her parents crashed into a mountain in North Carolina. There were no survivors.

I’d never met Amanda Davis but I knew who she was and I was stunned. I’d been following the progress of her book with great interest. She’d done what I hoped to do: after publishing a story collection (Circling the Drain), she’d written a first novel (Wonder When You’ll Miss Me) and was on a publicity tour. I’d just seen a news story about how her father, who had a small plane pilot’s license, was flying her around the country to her events.

Amanda Davis was one of the funniest, most self-effacing, chutzpah-charged, and big-hearted human beings anyone could ever hope to encounter. To meet her was always a historical event, one you would remember for the rest of your life.

Julavits announced that the site would serve as a forum for people who knew and loved Amanda to share stories about her. The page also had links to places where her stories were available around the web.

“Forum” is a slightly old-fashioned word meaning “a public meeting place for open discussion,” but notable about this particular forum, especially in light of all that would come after the arrival of Facebook, was the absence of comment and discussion. No liking, no easy emojis, no pictures. Just words, paragraph after paragraph of them.

What was soon apparent, and continued to be apparent through the months that new entries appeared, was that Amanda Davis had been a superhero of friendship. Whether a person had known her for a day or for years, whether they’d met her in childhood or as an adult, whether they were single or married, had children or not, were a woman or a man, the quality of their connection to Amanda was something powerful in their lives. She helped them, but was never a martyr. She made them laugh, but was not a clown. She could be snarky, but was never hurtful. She was good with children, liked to introduce her friends to each other, and always knew her neighbors. In every way that seemed to matter, Amanda was really, really good at friendship.

I read the site every day for weeks, then months. Some combination of my own loneliness at the time, worry about my work, horror for what had happened to Amanda and her family, and curiosity about how to raise a brand new person in the world, contrived to make me addicted to the story of Amanda. I happen to agree with something written by Megan Mayhew Bergman: “A writer’s material arrives in the form of obsession, a need for the close and uncomfortable scrutiny of an idea.” Something here had hit a nerve.

My first best friend moved away in first grade and I lost her. My second best friend came to town for a year when we were twelve, then moved back to her home state. I didn’t lose her, but she was always far away at a time when long-distance phone calls were expensive. I learned not to rely on friends too much — they were always leaving. My parents told stories about friends from the time before my brother and I were born, but those friends were all far away by the time we were growing up and we rarely, if ever, saw them. Friendship, it seemed, was not something you traveled for. Friends were nice if they were present and convenient. If not, the Christmas card arrived in December and another year went by.

Somehow, through middle school and high school and college, I managed to accumulate a handful of friends who stuck, and then stayed in touch long enough to build something special. But I always felt I was the beneficiary of their dedication; I was not the one doing the work to keep those friendships alive. Amanda Davis made me want to do better.

At some point I printed out all the Amanda Davis memorial entries, put the stack of paper on my desk, and started typing passages I particularly admired. I know writers who do this with favorite books, just to feel the rhythm of the sentences in their fingers. I was doing it for the same reason, but also to imagine what it would feel like to eulogize a friend. What could I say about my friends? What would they say about me? I began to worry we didn’t have enough material.

I started noticing articles in the news about the science of friendship, its health benefits, how in the rise of modern over-scheduled life, it’s the first thing we cut time from. A few years passed and articles about the rise of social media started to appear, how it was, ironically, making us unhappy. “Friend” became a verb, but the Dunbar number — the maximum number of people with whom one can maintain a meaningful relationship — was not growing. We had lots of “friends” but were spending less and less real time with our friends. Against this backdrop, I’d look back at the McSweeney’s Amanda Davis page, the design and function of which never changed, and it seemed wiser and more beautiful with each passing year.

I started collecting quotations about friendship and I typed these into another file.

It is in the thirties we want friends. In the forties we know they won’t save us any more than love did. (F. Scott Fitzgerald)

Without wearing any mask we are conscious of, we have a special face for each friend. (Oliver Wendell Holmes)

It is easier to visit friends than to live with them. (Chinese proverb)

Just about the time the Elena Ferrante quartet was on everyone’s reading list, I started seeking out books centered on friendship. A few I loved: Truth and Beauty by Ann Patchett, Let’s Take the Long Way Home by Gail Caldwell, Dear Thief by Samantha Harvey, Friendkeeping by Julie Klam, Into the Tangle of Friendship by Beth Kephart, The Door by Magda Szabo. I reread A Separate Peace, remembering the friendship between Phineas and Gene as one of the most interesting things I’d encountered as a young reader.

Then one day I was running on the Hudson River path when I saw someone carrying a book bag that said, “A best friend is someone who…” The woman was moving in the opposite direction and before I had the presence of mind to circle back and try to read the rest of the quote, she was lost in the weekend crowd on the promenade. Did the sentence finish on the other side of the bag, or was it meant to be an open question? I’ll never know, but I realized I wanted to try to answer it from a perspective I’d not found in a book, that of a difficult person trying to be a better friend. I went home and typed that line into another new file in the folder I’d labeled “Amanda Davis” but which became, over many drafts, the story of my character May Attaway in Rules for Visiting.

My debt to Amanda Davis and her vision of friendship is huge. I’m also grateful to McSweeney’s for making a forum that turned into an extraordinary document, filled with beautiful writing by some of our best contemporary writers. It’s tempting to quote them, but that doesn’t feel like my right. I urge you instead to go to the page, which is still there, and read for yourself. You will be moved. You will wish you’d known Amanda Davis. You will want to become a better friend.

Jessica Francis Kane’s new novel, Rules for Visiting, is out May 14. 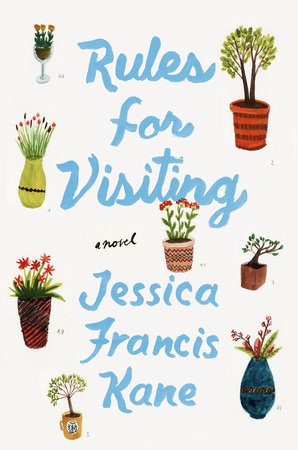