Imagine you are a middle schooler, in your school’s library, writing poetry. Now imagine rock stars enter the room. They ask questions about your poems, then say, “Let’s make songs out of them!” The still, spacious library fills with energy and music. Joy. You do this every day for a week until the experience crescendos into the moment you step on stage with those musicians, perform the song, and receive a standing ovation from the audience.

It’s more than a dream scenario. Last month we (Young Authors Greenhouse) partnered with Frederick Law Olmsted Academy South, an all-girls public school in Louisville, Kentucky to create a program we would have wanted as kids. Three days a week, since the first few weeks of school, a team of volunteers encouraged students to put their ideas on paper to create poems. Those poems were transformed into lyrics of a song and performed on stage. Teddy Abrams, music director of the Louisville Orchestra, and Jim James, lead singer of My Morning Jacket, pitched the vision for the program last year. This year, with their help, we recruited more musicians — allowing all our students one-on-one time to work with professional artists. 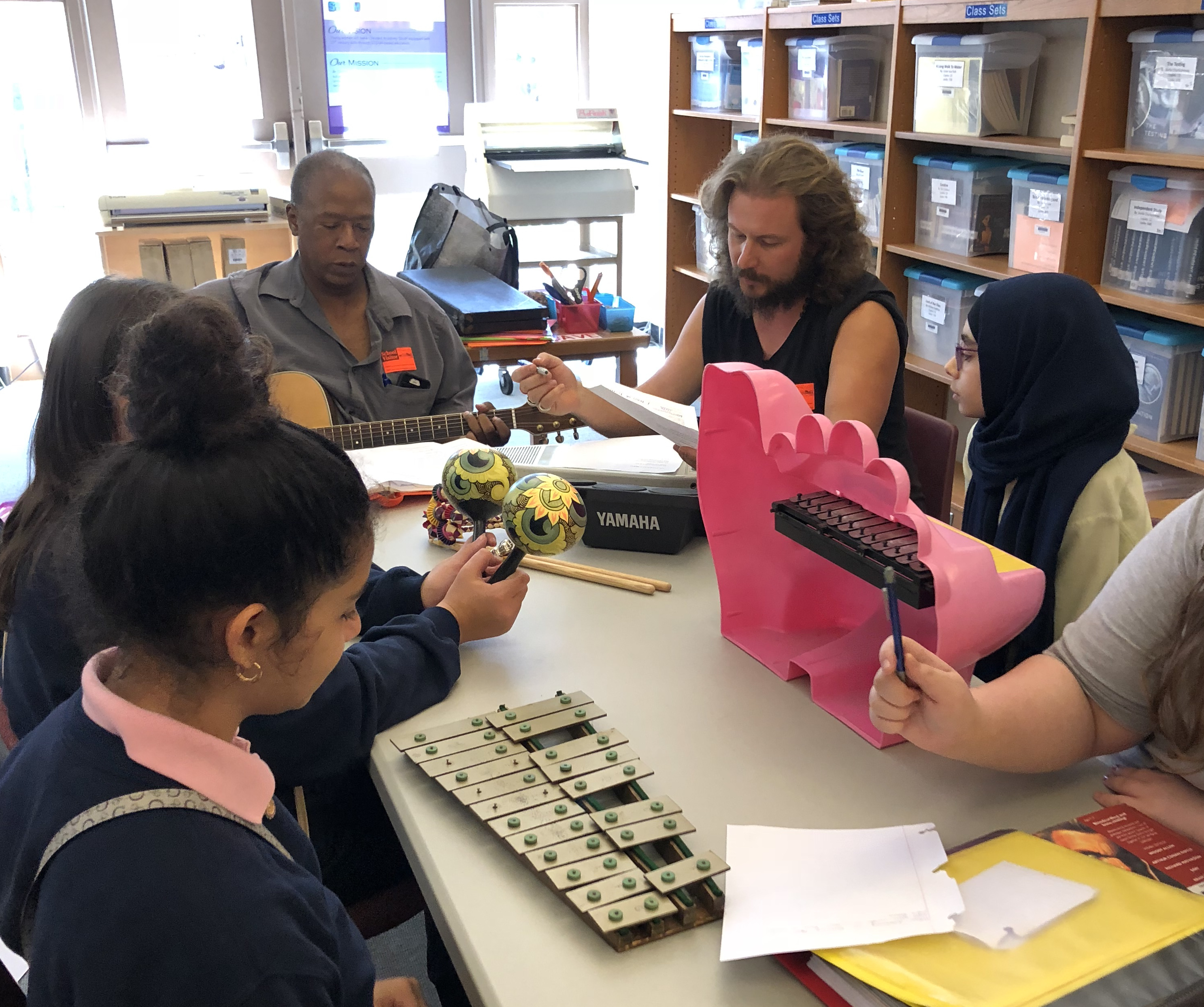 We started by asking students questions: “What type of song do you want to write? What is it about? What emotions do you want people to feel when they hear your song?” We then grouped them into four “music bands” and they brainstormed:

Over two weeks, these seventh-grade bands wrote and revised together. They even passed notes during other classes about lines they could add to their songs.

Once they had solid drafts of lyrics, the musicians rolled in, instruments in tow. Jim James, Teddy Abrams, Tyrone Cotton, Scott Carney, James Lindsey, 1200, Rachel Grimes, and Carter Wood Sartor paired up and started working with a student band. 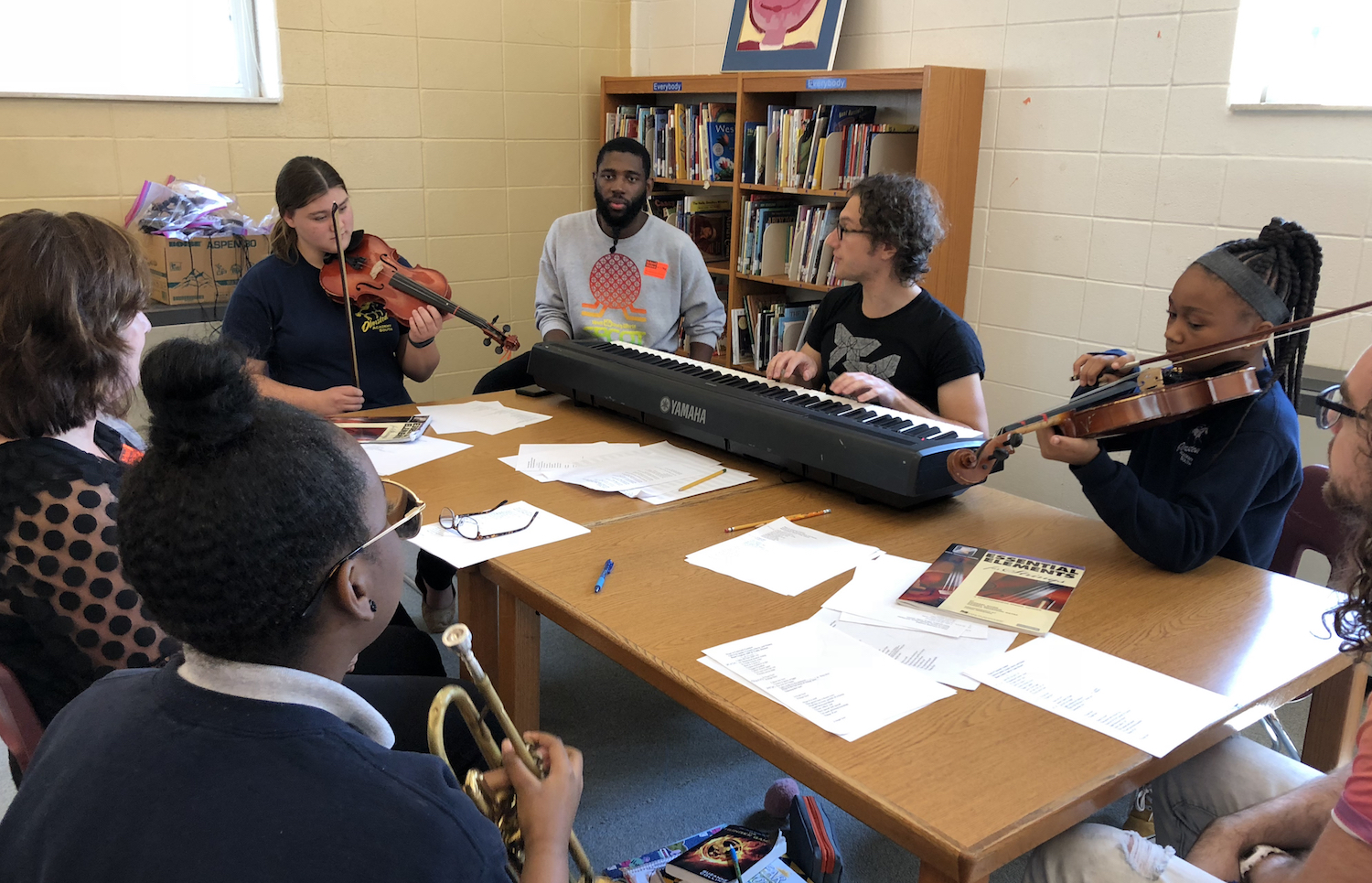 Musicians 1200 and Teddy Abrams work with the students.

The musicians asked the writers what kind of tone the songs should have, what rhythm, what sound. Damari suggested to Jim James and Tyrone Cotton, “It should start slow and then pick up.” The writers guided the musicians in making melodies that perfectly reflected their words. And the musicians encouraged the students to play and sing along, to be brave. Jim James rallied his group saying, “There are no mistakes in music. That’s what I love about it.”

Rebecca kept the beat, tapping drumsticks on the table. She told Jim, “You aren’t getting these back!” Aya played the “Pianosaurus” — a hot pink, plastic dinosaur with a keyboard that Jim James found in a dumpster. Jim signaled to another band member, “Take it away, Damari” and she played a solo on the xylophone.

In just one week, note-by-note, our students transformed their words into fully-realized songs and performed them on stage. What amazed us most about that accomplishment was not the talent of our students, because we already knew them to be insightful and creative. We were awed instead by their unveiled courage; they were convinced their words were worth it, that they were worth it, and that writing and performing was something they could do. Sharing their work in front of strangers wouldn’t be easy — one songwriter even walked off in the middle of her rehearsal because she was so nervous — but they did it anyway. Experiences like these build students’ confidence and help them grow into poised artists, eager to share their talents with the world. 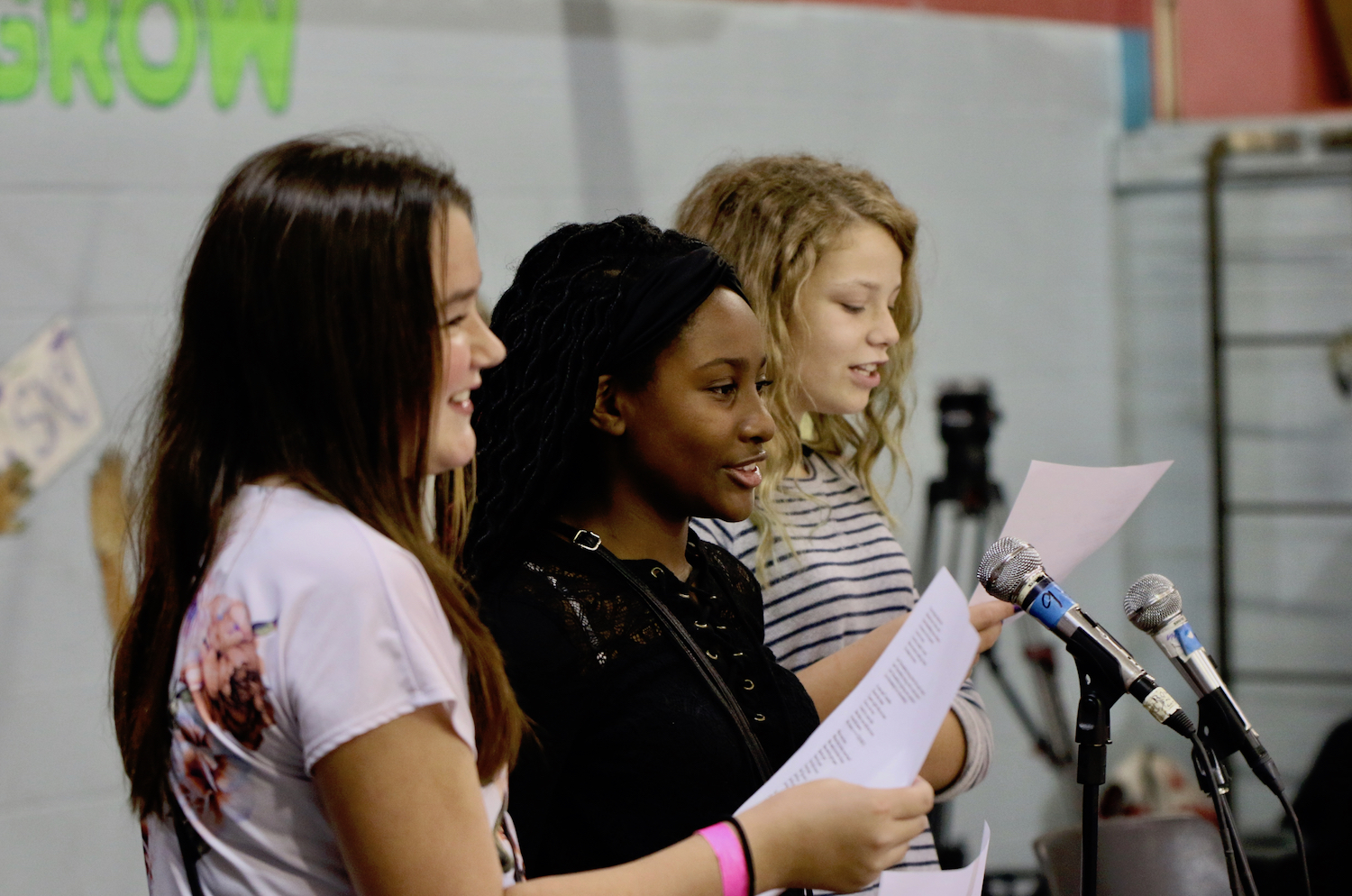 After each song, Dave Eggers interviewed the young songwriters. On the subject of why The Daydreamers chose to write about hope, Jayda, age 11, responded simply, “Because hope is change.”

Moments like these keep us motivated. We want to keep providing opportunities for our writers’ words to be heard loud and far.

One more time, imagine this: a teacher says, “If you can hear me say, ‘I am a rock star!’” And a classroom of seventh-graders shouts proudly, “I AM A ROCK STAR!”

Hopeful brings a yellow sun
warmth for everyone, to laugh along

Shining til the night falls
bright like a soft hijab, the story never stops

My heart is broken
which piece do I follow

Hopeful brings blue like the sky
blooms and comes to life, just wait and see

Is hope here?
Hope is here.

Hope is a seed
That grows into a dozen roses
Hope lies in every speckle of a freckle
Apple blossoms bloom
Green, yellow, red
They spread and spread
On earth growing beautifully
Things of joy

To learn more about us: www.youngauthorsgreenhouse.org