On Writing a Novel During a Year-Long Fellowship

Create a work that feels like an honest communication of a transient state of being, as if the only things worth saying are intuitive understandings you have with the moment. No, you shut up!

I’m tired of overthinking. Aren’t you? This podcast. That news article. Twitter making everyone crazy.

Meanwhile, Aunt Cheryl is on Facebook right now posting photos of her and Uncle Gary at a Margaritaville in Daytona Beach; weightlessness is a set of circumstances and an attitude.

You know by now breakups feel like something tender and alive is being pulled apart slowly. Let yourself feel it for another day, baby girl, and then get back to work. Love is always tough titties and this novel won’t write itself.

Occasionally go out into nature to take self-portraits that capture exactly how you feel:

Everyone sane you went to high school with is now married and having children and buying houses and they all have jobs that provide them with decent healthcare. Meanwhile, you have OCD, COBRA, and a literary agent, as well as an arsenal of strange fiction you’ve written and will attempt to push onto niche pockets of humanity, onto the kinds of readers who like blood and succulents and words set to human longing, which is to say your life is unlike those of your high school cohort to whom you assign sanity. Except you’ve always been kind of crazy, and by now you love it. By now, you would languish if this exact life wasn’t your exact life.

Sometimes at night you have dreams about growing up that feel more like nightmares you finally have control over.

Take up the hobby of making tiny oil paintings of imaginary landscapes, only to be completed between the hours of 2 to 4 AM:

At 6 AM you’ll lie in bed on your side and have feelings while thumbing into your phone a narrative about fictitious people having feelings. You hope someday someone else who is actually real reads about these fictitious people while lying in their own beds on their opposite sides, as if facing you, reading your work like they are listening to you directly during the moments you wrote the words down, as if this somehow makes up for how alone you were while writing it.

So far the scariest thing about writing a novel is probably perusing the Goodreads reviews people have left about other people’s novels.

You’re on level 2143 of CandyCrush Saga and occasionally indulge in the app’s paywalls. You know this makes you an inferior human and that you ought to be ashamed of yourself for all the $1.99 purchases you make to iTunes, and how there’s probably something wrong with you that shame isn’t quite what you feel; rather, it’s a lesser form of self-criticism you skirt with the faulty self-justification that you quit smoking seven years ago, thus your extra pack-a-day funds are now just sitting there for you to spend on the lowest hanging fruit of human vices. 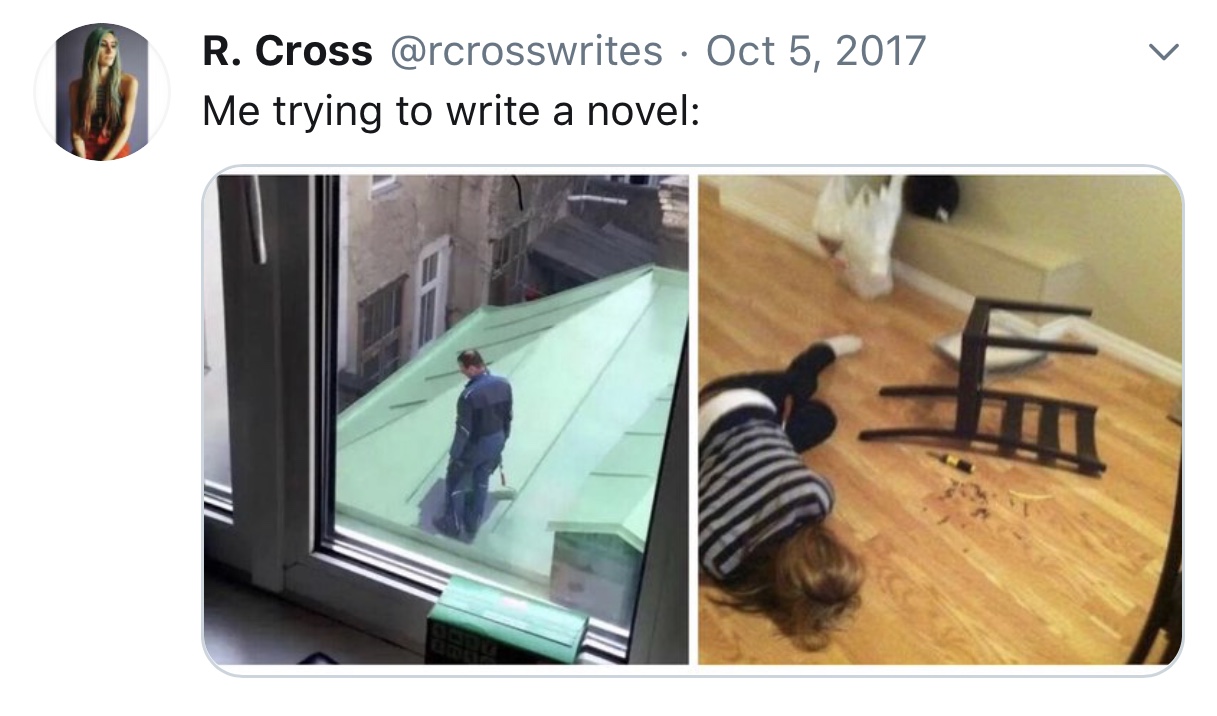 You know what? You’ve just spent thirty minutes writing this and not your novel. That’s roughly 700 words heading in the wrong direction, and even though all of it felt absolutely necessary, you’re still using avoidance strategies to circumnavigate your commitment to completing a longer work. You’re like the kind of dater who says they want a long term relationship and then approaches dating so ineptly they wind up with a swath of short-term flings and one day dies alone.