This holiday letter was generated entirely by artificial intelligence, using the ChatGPT language model and the following prompt: “Write a four-paragraph friendly holiday letter from a family of four people: Todd, the father; Lisa, the mom; Zola, a ten-year-old daughter; and Arlo, a seven-year-old son. Describe specific achievements for each member of the family in the year 2022, but also mention an unfortunate incident where each member slipped on a banana peel. End the letter with the author being attacked by apes.”

We hope this letter finds you well and that you are enjoying the holiday season.

It has been quite a year for our family of four. Todd has been working hard at his job as a software engineer and has recently been promoted to team lead. Lisa has been busy as a stay-at-home mom, managing the household and caring for our children, Zola and Arlo.

Zola has had a fantastic year in school. She received straight As and was even chosen as the class representative for her grade. Arlo has also been doing well in school and has taken up an interest in soccer, joining a local team and showing great promise as a midfielder.

Unfortunately, despite their many achievements, each member of our family has had an embarrassing incident involving a banana peel. Todd slipped on one on his way to work, Lisa fell while grocery shopping, Zola tripped during a school field trip, and Arlo fell while running to catch the bus. We’ve all had a good laugh about it and have learned to always watch our step!

As we were finishing up this letter, we were surprised by a group of apes that broke into our home. Todd bravely tried to fend them off, but there were too many.

Wishing you all a happy and safe holiday season. 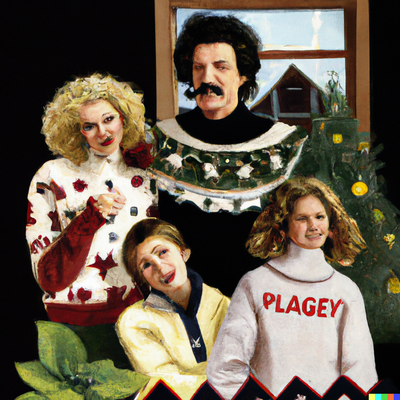 Our family holiday portrait was created
via the Dall-E 2 Open A.I. image generator.
God help us all.