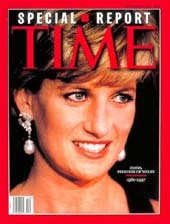 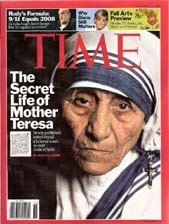 Two Time covers 10 years apart … What’s peculiar here is that the week it actually occurred, notice of Mother Teresa’s death (on September 5, 1997) was completely swamped by the saturation coverage of Princess Di’s a few days earlier (on August 31), and now, when Time perhaps tries to do penance for that historic gaffe, they still can’t do so without still invoking Princess Di (her head titled in identical fashion) like a thought bubble astride Mother Teresa’s forehead. Indeed, in the years since, Princess Di’s image has somehow blurred with that of Mother Teresa—the fashion model turned people’s saint (her occasional advocacy, between desperate affairs and frenzied photo ops, on behalf of the victims of AIDS and landmines, seemingly invoked with every mention)—whereas, according to the current article in Time, the soon-to-be-canonized Saint Teresa spent the better part of her life in an extended crisis of faith, having utterly lost contact with her God.

The latter theme is rendered all the more poignant, in the current issue of the magazine, with the peculiar juxtaposition of that front cover image of the haunted Teresa with the ad on the magazine’s back cover, 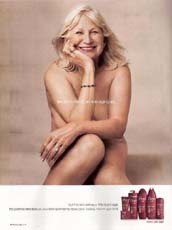 a decidedly celebratory image of the life of the flesh, albeit one whose text assures us that the woman in question is “too old to be in an anti-aging ad.” Talk about a woman of spirit, one who seems by the look of it on decidedly good terms with her god!