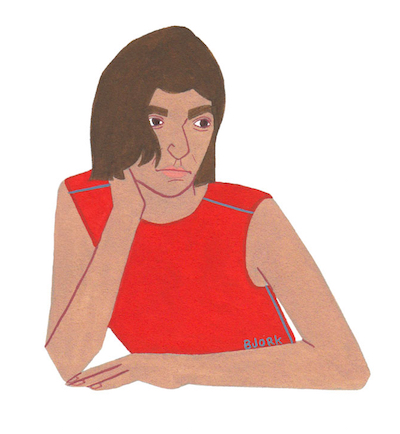 Tabitha1 is a kempt woman with a wholesome face, straight brown hair, and no makeup. I meet her as she’s finishing her shift at a food bank. Primary colors decorate the lobby, and on the walls, shards from plastic food containers are patterned into artsy mosaics. Tabitha wears jeans with an earth-toned sweater, and she carries a bouquet of dark pink tulips some florist couldn’t sell and donated instead. When I ask her about her job, she talks about the many duties she maintains, including the mail-holding center, which is especially helpful for homeless people who are unable to collect their mail for months at a time. “I’ve gotten to know a lot of them by their first and last names because of this service,” she says happily.

As our interview begins, I ask Tabitha to tell me about the shooting at the Twilight Exit. It was only the second time she’d ever been to the bar, she said. “I was with Dave. It was kind of spontaneous. I hadn’t really been planning on going there at all, actually. Earlier that day, I’d broken up with him over dinner. We’d gone out to eat at a Mexican place. We’d only dated a few months. Dave is a very sweet guy. But it was just time to let it go. He was cool about it. He asked if I wanted to go out that night and I decided I did, to show we could still have fun together and that I wanted us to stay friends,” she said.

Tabitha was seated in the dining area when the shot sounded by the entryway outside. “We hadn’t been there very long at all. Dave had just gotten up to get drinks, so I was at a table by myself when it happened,” she said. “I didn’t see any action. I’d heard some shots and that was it. I didn’t think I was gonna die. Dave was a lot more freaked out than I was. He was closer. He saw more of it. He saw the guy with the gun. I don’t know if I really saw him. I don’t know if I really saw a gun,” she said.

“There was some feeling of panic as I flipped my table over. I’d crouched down behind it, for protection. In a situation like that, you don’t know if you’re gonna get shot yourself. Some patrons were yelling to get down. And then it seemed like we were able to get out. We started cruising out. I left everything behind. I just followed the people and tried to stay calm. In the circumstances I was relatively calm,” she said.

This wasn’t Tabitha’s first run-in with violent crime, as it happens. Some years ago, she was burglarized and held at gunpoint, she said. “It was back when I was in college, 1992 or so. I lived in a shared house in Houston. I was in the living room, talking on the telephone with a friend, and one of my housemates came in with two guys. She was in college too. I thought they were friends of hers, so I didn’t pay them much attention. It turns out they’d held her up in our covered parking garage when she’d pulled up in her car. Her window was down, and one of them ducked in and held a gun to her head and said, ‘Give me your money.’ There were two of them, they were working together. I guess they were originally gonna get in my roommate’s car and drive off somewhere with her. But she told them not to, she said she had money in the house, so they followed her inside. I was talking to my friend, and they all walked in right as I was saying goodbye. The guy had a gun, but I didn’t realize it. I was like damnit, why didn’t I notice that. I could’ve whispered to my friend to call the police right before I hung up,” she said.

“They were Asian men. They might’ve been Vietnamese. My housemate was Korean. A very beautiful Korean woman. I immediately thought she was being targeted because of her race, but I don’t really know. The guys were hopped up on drugs. That might’ve had do with it too. They were acting super high, super agitated,” she said.

“One guy was pretty short. We stood eye to eye. He was fit. Very muscular. He was in his late 20s or early 30s. He got in my face and said, ‘Give me all your money, or I’ll fucking kill you.’ I think at that moment his buddy had the gun. It was a shotgun. I had anxiety rising in my chest, but I stayed really calm. Overall I stayed really calm. They went through our house. They gathered our valuables. What little we had, anyway. We didn’t have much money. We were all young and broke. My roommate told them she’d take them to her bank, so she could withdraw money for them. Then she left with one of the guys. They drove off to the bank together. The other stayed with the gun,” she said. “Somehow, he ended up being at our house for an hour.”

“At first, it was just me at home, and another female housemate. She was in bed when they first came in. She’d been up late working on a project the night before. She was an architecture student. I had to get her up. He had us sitting in the living room. We were just sitting on the floor. The gun was across his lap. In the middle of the whole ordeal one of our other housemates, a guy, came home. And he had to sit down too,” said Tabitha. “There was one more housemate who didn’t come home and missed the whole thing.”

“I don’t know why, but I had this instinct the gun wasn’t loaded. I remember I was just wishing so hard that my psychic powers were more developed, and that I could communicate a coordinated attack with my housemates so we could overpower the guy,” she said, kind of joking, but kind of not. “Obviously that didn’t happen, and it’s probably for the best, even if the gun wasn’t loaded,” she added.

“It got to a point where I was sort of back-talking him. He lit up a cigarette. I was like, can you please not smoke. I had an exam in differential equations the next morning, I remember. I wanted to go to the bathroom,” said Tabitha. “Eventually our roommate came home from the bank with the other guy and then both guys left, and then it was over.”

Tabitha’s story ends as abruptly as it began. “My roommate had withdrawn the cash, and the guy took it. I don’t know how much. She was broke too. She couldn’t have had more than a couple hundred dollars. We filed a police report after, but nothing happened. Since they’d gone to an ATM, there should’ve been footage. If the police would’ve put it high on their list, maybe they would’ve found them. I don’t think they ever really tried. We weren’t their priority because we didn’t live in a rich neighborhood.”

Tabitha stays practical and upbeat as she’s speaking, even when distressing stuff comes up. I ask if her experiences from the burglary steepened any terror she might’ve felt at the Twilight. “I don’t think that night was super traumatic to me. I was able to get back to normal afterwards. It was definitely a big deal as it was happening. But I have a protective impulse. I kept some separation from it all,” she says. She mentions how the Twilight shooting had occurred alongside a couple other unrelated yet deeply challenging hardships in Tabitha’s life. As she describes them to me, her tone is consistent. We talk about moving forward. “I like feeling confident every day and putting that energy out. It’s not like I’m clueless or that I don’t think someone would jump me. It’s more like: I’m not a worrier. I don’t want that feeling pervading. I choose to not live in fear,” she says.

1 Not her real name, per her request.