Our crack team of aspiring high school-aged music journalists — for this interview, that included Laura M, CJ M, Aphra P, and Maja R — met with Holly Herndon on Saturday afternoon. These creative writing students channeled their musical knowledge and interviewing skills during the following on-the-spot Q&A with the San Francisco-based sound artist, who reveals some of her secrets about drum patterns and chord progressions but keeps close to the chest the details of her dissertation at Stanford. 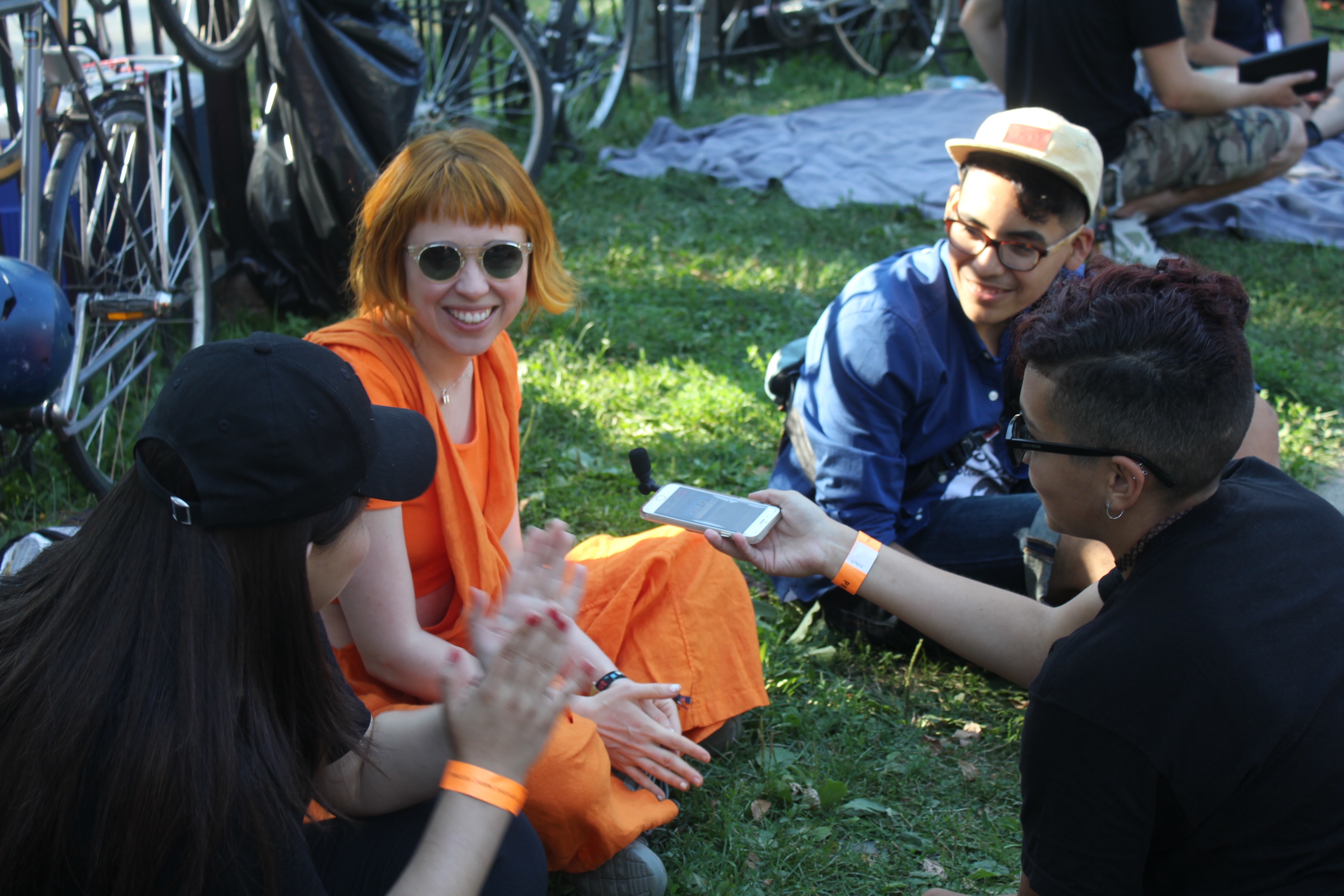 Holly Herndon is an artist and composer with shiny orange hair. She incorporates an interesting selection of sounds into her music, including doors opening and balls bouncing. Holly was born in Tennessee in 1980 and had never thought of working with computers until she was out of college. For a while, Holly lived in Berlin on a high school exchange student program. While in Berlin, she was drawn into the world of dance and techno music and played with a band called Electrocute. After graduating high school, she moved back to Berlin and began DJing. Holly returned to the U.S. to study at Mills College in Oakland, California, where she earned her MFA in Electronic Music and Recording Media. While in college, she worked on her debut album Movement, (released in 2012) which combined her club music roots, complex samples, and vocals. Holly is now based in San Francisco, California, and is currently a doctoral student at Stanford University, studying composition. Here is our conversation with the unique and charming Holly Herndon. — Maja R

HOLLY HERNDON: You have to remind me what school you go to and all that.

826CHI: So, my name’s Catarino. That’s my real name. My nickname’s CJ, and I go to Noble Street College Prep.

826CHI: I’m Aphra. I’m homeschooled. [Pauses] Wait, was there something else I was supposed to say? I don’t know. My age?

HOLLY: Wait, but how are you guys all together?

826CHI: We were brought together by this organization called 826, and what they do is lift us off the ground for journalism and encourage young writers. They have workshops for elementary students too, but we’re in the high school program.

826CHI: My name’s Maja and I go to Kennedy High School.

826CHI: My name’s Laura and I go to Curie Metro High School.

HOLLY: My name’s Holly and I guess I also am a student. I go to Stanford University.

HOLLY: Well right now, I’m in a doctoral program. It has a very different structure than your usual master’s or undergraduate program, where I don’t have to be in classes all the time. I spent three years taking and teaching classes, and then I have two years to write a dissertation. So now I’m in dissertation mode, which means I can schedule myself how I want, but during the three years when I was teaching and taking classes, it was actually really difficult. I didn’t really have a social life. I mean, I guess you could consider work “social” when you work in the music industry, but I was always either on a plane or doing homework or teaching or working on music. I kind of forgot how to have a life for a while, and now that I don’t have to be in class anymore, I’m re-learning how to be a normal human being. Like exercising and cooking and stuff like that. I think I did a really bad job at first, but now I’m trying to balance it out a little bit more.

826CHI: What’s your dissertation on?

HOLLY: I will let you know all about it when it’s done.

HOLLY: No, I don’t want to talk about it when it’s still —

HOLLY: Well, the program I’m in, it’s a composition program. My focus is computer music, so it will be related to my performance practice. I’ll just leave it at that.

826CHI: Since you’re in school, will you continue to do the music scene, or is this eventually going to end for you?

HOLLY: No, no, no, this is my job, too. This is my career. And what I’m studying in school is composition, so it’s very much related. I plan on doing this as long as people will let me.

826CHI: Would it be right to call your music “techno”?

HOLLY: I don’t really consider it techno, but it doesn’t bother me what category people wanna put it in.

HOLLY: Experimental dance music. That’s the generic term that I get… I feel like the borders around the genres are blurring and morphing and changing. Or you could just call it computer music or—

HOLLY: It’s not house music, though. When I think of house music, I think of a very specific BPM and a very specific drum pattern, and that’s not really how I approach songwriting. It’s more about the drum patterns in the palette. It’s always totally up in the air and can be anything. I don’t like to stick too closely to one convention, necessarily. It’s more about the concept behind the piece, or what the lyrics are about, or what the soundboard will be like. Some things don’t even have a drum beat.

826CHI: How would you describe your songwriting process, and how does it go hand-in-hand with the rest of what you do musically?

HOLLY: It varies for each piece. You never know what’s going to give you an idea that you can build on, but I really try to couple the concept behind the piece and the production in some way. Like with “Home,” for example, there’s this sound of a ball dropping and that was the start of it. It’s very literal, but I felt like I was “dropping the ball” ‘cause I was trying to juggle everything and I kept messing up and forgetting things. Another time I was trying to create this chaotic sound of having a million windows open on your computer, and started recording myself browsing around with different windows open. I was recording the sound of different YouTube videos or whatever… so I don’t know, it’s hard to say what it’ll start with. Sometimes it’ll start with a lyric or a chord progression, but usually I’ll have an idea or a feeling I want to communicate, and then I try to build everything around that.

826CHI: Your music is not something you hear every day. How do you describe it to people?

HOLLY: It depends on who I’m talking to. I try to find an entry point for whoever I’m talking to, like what kind of music they listen to. Or I try to find a nexus point where they’ll understand what I’m talking about, because often if I say “computer music” then people are like, “OK, well what does that mean?” Like, “What do computers sound like?” or “Is that academic?” It’s hard to give it this single-line description that everyone’s gonna understand, but I think people understand “experimental.” People understand dance music. I think I make pop music in my mind, but I don’t think the rest of the world sees it that way. [Laughs]

826CHI: How did it feel to change scenes? You also lived in Berlin for a while.

HOLLY: God, these are good questions. Well, Berlin was a really foundational place for me to live because there’s so much electronic music there and there’s so much live electronic music happening all the time. There’s so many clubs. You don’t have to be 21 to go to clubs. It’s not so regimented. You can casually experience all kinds of different performance environments and that was a really, really wonderful place to start performing. When I first started playing, I was really terrible. [Laughs] It’s good that people weren’t booing me off the stage. And you know, starting out in a place like Berlin was really forgiving. It’s a really good place for experimentation. Audiences have a really high tolerance for performers trying things out even though they don’t know what they’re doing.

826CHI: The techno/electronic scene is really big in Detroit right now. Have you ever performed there?

HOLLY: You know, I’m embarrassed to say I’ve never been to Detroit. I would love to go, though.

HOLLY: [Laughs] I would still like to visit. It’s an iconic American city.

826CHI: If you could be doing anything else, what would it be??

HOLLY: This is gonna sound really boring, but I think I might have studied economics. It controls the world.