So, dabblers in the Everything That Rises book that launched this whole contest, or else those who might remember my own second interlude from a while back in the contest, which is to say those who will recall this trill of associations: 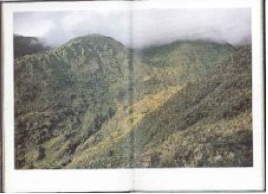 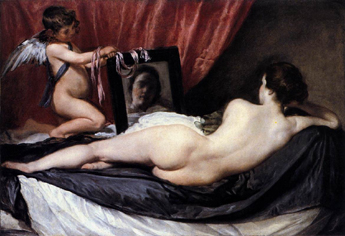 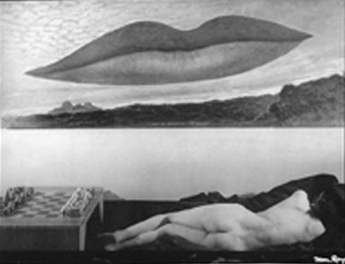 Man Ray: Photo of his painting on wall above bed with model. 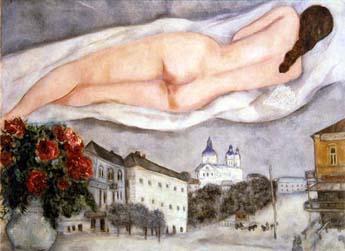 … will perhaps share my abashed astonishment at the following ad I happened upon in the recent New York Times Magazine Food Issue: 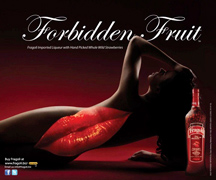 To paraphrase a similarly aggrieved John Cuneo, whose letter to the editors of the New Yorker following a similar instance of the seeming bald-faced theft of intellectual property I quoted in the Monica Lewinsky chapter of the aforementioned Everything That Rises volume, if this was my concept, and if one could copyright ideas, you people would be hearing from my lawyer (if I had a lawyer)… that is, as well, if I even believed in the viability of the notion of intellectual property, regarding which I hope every entry in this contest will have given you, my fond readers, pause…

But anyway, this whole sordid little affair set me to thinking about the whole tradition of nudes as landscapes, and that in turn set me to thinking once again about an especially odd association I’d been entertaining recently, one indeed so odd and unsettling that I’d decided not to burden you, my fond readers, with its exposition. Only, the people at “Fragoli Imported Liqueur with Hand Picked Whole Wild Strawberries” really seem to be forcing my hand. 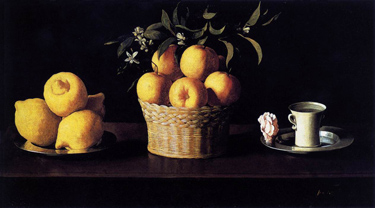 So having it here in town during its Frick sojourn, I had occasion to revisit the painting on several occasions and found myself thinking a good deal about Zurbarán (1598-1664) in relationship to his virtually exact Spanish contemporary Velázquez (1599-1660). Velázquez, of course, came to have the plum job of any painter in Spain, court painter to the king, as such free to paint pretty much anything he wanted, including, as we have seen, the stunning nude now known as the Rokeby Venus. Zurbarán, for his part, was saddled with a much more conservative set of patrons, which is to say the various religious orders who commissioned his by and large extremely somber, constricted (albeit ravishing in their own way) religious canvases devoted to the portrayal of saints, martyrs, madonnas, monks and nuns. 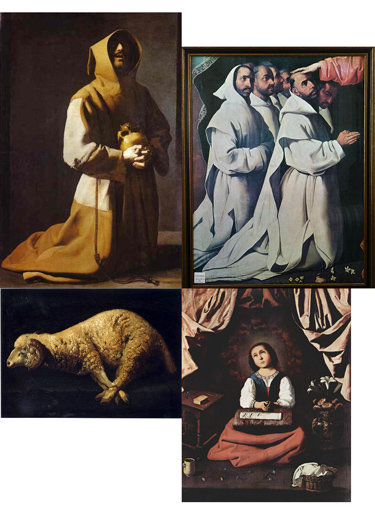 And then, in the midst of all of those, we get that still life with the lemons and oranges and the cup and rose. And I’m sorry, but look again at that painting, those nipply lemons:

In fact, lower down, look how the other nipple veritably kisses its reflection in the metal plate:

And now note how smack in the center of the entire painting we get that navely orange (the navel, precisely of a navel orange):

And then, over to the side, the vaginal cup, with its clitoral handle and its pubic rose:

Or so, anyway, did I find myself becoming increasingly convinced on each fresh visit to the Frick. Though I’d resolved to keep such thoughts to myself (after all, there are only so many loose-synapsed epiphanies with which I feel that I ought have the right to burden the rest of you, my fond readers), until, as I say, along came that Frigoli ad, followed, a few hours later, by my happening upon the following lines in Not-Knowing, a recent miscellany of essays by and interviews with that late great divine, Donald Barthleme, from his introduction to a 1985 book of nudes by Mapplethorpe, Larrain, Turbeville and others, entitled “Exquisite Creatures”:

The nude is a variety of still life, and in this genre delicacy of touch is everything, from Zurbarán {!} to Morandi…

(Don’t even get me started on Morandi.)

The simplest forms translate into and out of each other, emblems of basic images stamped forever on the mind. It could be argued that Morandi was really painting women, not bottles, and that Mapplethorpe is secretly photographing bottles, not women. We recall that Magritte deftly melded the two forms in his bottle-nude of 1943, Femme-bouteille.

So what’s a poor guy to do?

I know, I know: please, please, excuse me.

And all of that is without even broaching the subject of chess (check_mate_, indeed). For gazing once again upon Man Ray’s photo of his own painting above the bed in his studio over which he’d stretched his Rokebyan model, I suddenly noticed that chess set over to the side. What on earth was that about?

And then I recalled the famous photograph of Man Ray’s surrealist chum Duchamp, on the occasion of the opening of his first ever retrospective at the Pasadena Museum in 1963, locked in a chess match clench with a naked Eve Babitz… 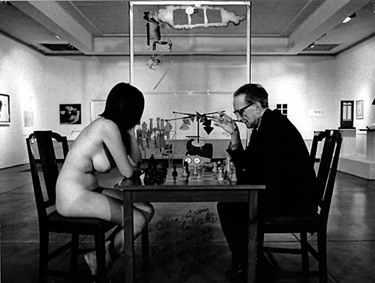