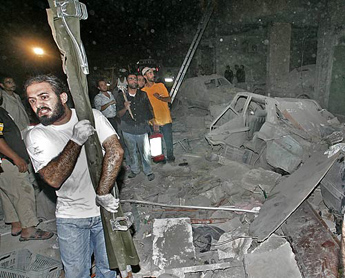 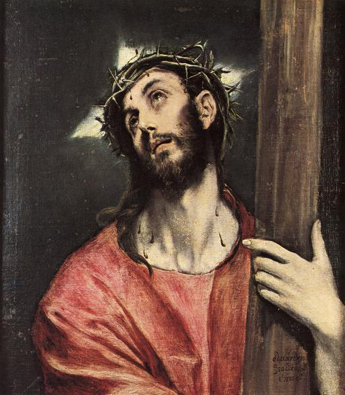 Daniel Herman writes in: “Please find attached a photo from the cover of the printed edition of today’s L.A. Times by Robert Gauthier. The imagery of Jesus carrying the cross is striking. I am not sure what the companion image is. Maybe something from the likes of El Greco?”

There does seem to be something about the apparently endless Calvary of the Middle East (of all places!) that sets photojournalists on the scene and then photoeditors back home to reaching, sometimes almost unconsciously, for christological references, and, yes, this is a good one. Note that odd halolike emanation welling out from just above the guy’s head.

It seems to me, though, there is perhaps something more profound at work here as well. See the following, another of my interludes, which I’d had all racked up and ready to go even before we received this submission …

Readers of Everything That Rises will perhaps be able to share the sense of startled surprise I myself experienced the other day when, browsing through a perfectly luscious monograph on the work of the thoroughly underappreciated contemporary artist Alan Magee, I came upon Magee’s digital-photomontage homage to the great High Gothic sculptor and wood carver Veit Stoss (c.1447–1533), 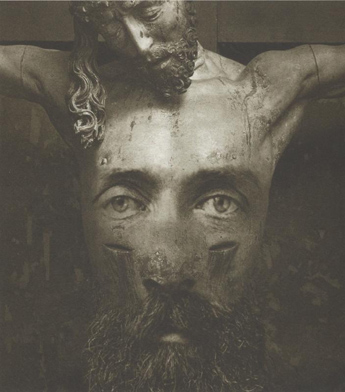 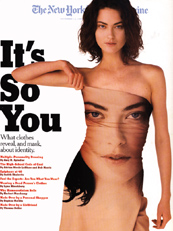 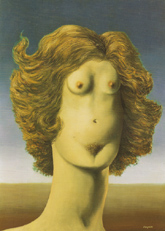 and the essay that accompanied it, culminating as it does with Rilke’s devastating poem on the Torso of Apollo:

… for there is no place that does not see you:
You must change your life.

In his gloss on the image at the back of his monograph, Magee relates how he first became transfixed by Stoss’s devastatingly poignant Crucifix of 1505 when it was on loan at the Metropolitan Museum in 1986 (he has since traveled to Nuremberg and Kraków to experience more of the master’s work in person), going on to explain how as he subsequently set about crafting his own homage, in 1992: “I remembered a biographical detail about the sculptor that I had read years before: he was convicted of forging a promissory note in 1503, was imprisoned, and branded on both cheeks as a punishment.” Actually, what happened was that the Nuremberg master was sentenced to death, with his sentence commuted at the last moment, owing to the irreplaceable splendor of his craft, though the hangman did go ahead and stick a red-hot poker through his opened mouth from one side of his face to the other, leaving the paired cheek-gash scars by which he would come to be identified for the rest of his life. The Crucifix in question he completed two years later, with Magee in turn having had the wit, with his version, to copy the lance wound under Christ’s right-side ribs over to his left side as well. One must change one’s life, indeed.

Now, friends of mine who’ve been following this whole Convergence passion of mine, and especially my responses to some of these recent contest entries, have taken to asking me what a good little Jewish boy like me is doing getting so caught up in Christian iconography. I suppose I could answer, glibly, as in my response to Dan Clem’s Contest Entry No. 5, by sputtering You’re the ones who keep showing me all these dirty pictures. But that would merely be begging the question. Or, rather, the question might better be answered with a counterquestion, for how can anyone who chooses to engage the Western pictorial tradition help but quickly become entrammeled in Christian iconography, both overt and (more recently) as sublimated, sometimes even unconsciously, into more secularized renditions?

Which in turn opens out onto a more intriguing line of speculation. For back in the first few centuries of the modern era (a period once characterized by T.S. Eliot for its “too rapid and great expansion and mixture of races canceling each other’s beliefs”—especially there in Palestine, at the very nexus of three continents—a period supersaturated with a surfeit of stray transcendences, when somebody—I forget, was it Petronius?—noted how, and I am paraphrasing, “Nowadays, walking about, one is as like to come upon a god as another person”), what was it about Christianity that so fitted it (and it alone, among all those other proliferating cults and heresies) for eventual success and triumph? Wasn’t it after all something about its story, its narrative, the overwhelming richness of that narrative and the way it so readily leant itself to illustration (especially across the many ensuing centuries when most people couldn’t read)?

You don’t have to be a Carl Jung or a Joseph Campbell to notice how the Jesus story manages to swallow up virtually all the great themes of human life (or, anyway, of human storytelling)—birth and death, poverty and wealth, virgins and whores, mothers and sons, fathers and sons, solitude and bustle, hope and despair, loyalty and betrayal, wakefulness and sleep, sin and sacrifice, great faith and great doubt, suffering and redemption, grief and rapture—and, for that matter, more specifically, many of the foremost motifs of classical Greek and Roman mythology: the virgin impregnated by a god who then gives birth to a hero, half man and half god, who in turn gets tested by a harrowing season in the wilderness and eventually, in dying, finds himself utterly transubstantiated. And what a death! Near naked like that, stretched supine, an object of pity and sorrow and horror and awe, but one as well through whose subsequent representation entire traditions of classical rendering of the Olympian gods were going to be able to be funneled.

It is as if, in the vastness of time, that specific story (more so than any of the others circulating across those years) had been virtually precision-engineered, lenslike, to gather in all the great themes from the ages that had preceded it, to concentrate and infuse those motifs with yet greater urgency and significance and then, hourglass-like, to spray them out on the far side into all the ages that were to follow. (And please: I’m not saying that it was thus engineered, I’m saying it is as if it were, and that it couldn’t have been more expertly suited toward its eventual triumphant purpose if it had been.)

Such that you can be walking through the medieval sections of any of the world’s great museums, and all you will see are images of Christ’s story (along with those of his subsequent martyred saints)—it can even get a bit trying, “Enough already!” you may find yourself exasperating—and yet you may in turn also notice how, even thus self-limited, the artists in question have been able to portray virtually all of life’s enduring themes (see above). Sometimes you will even catch them casting such motifs in contemporary dress—Jesus, say, as a Flemish burgher, Peter as a Venetian fisherman. (And this might not even have been a case of affect or artifice: how would anyone in those days have been given to realize that people didn’t always dress the way they do at present?) Annunciation (which is to say, receiving surprising news), birth, nursing and showing off a baby, the baby growing to young manhood, walking about, speaking in parables (the parables themselves), engaging the world, confronting his elders, getting betrayed, being tormented and humiliated, paraded about, tortured and killed, his corpse brought down and spread out and cleansed, surrounded by mourners, and finally, on the far side, lifted up to majesty and regal splendor. What of contemporary reality, back then in that age of abiding belief, couldn’t have been subsumed and represented through such a tale?

True, it was a tale that monopolized virtually all Western representation for centuries upon centuries, but it also allowed for the visualization of virtually all of Western life throughout those centuries. And then, when belief started falling away, the tropes through which those life stages had been visualized persisted in secularized form: that (and that virtually alone) being what receiving surprising news or being admired or being betrayed quite simply had come to look like.