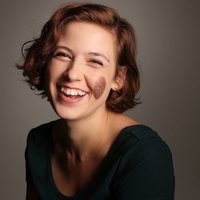 Chloe Radcliffe is a NYC-based comic and writer for The Tonight Show with Jimmy Fallon. She was named a TBS Comic To Watch at the New York Comedy Festival, has been seen on Epix, and was selected for NBC’s 2019 Late Night Writers Workshop. In 2018, Chloe was listed as one of Thrillist’s 50 Best Undiscovered Comics. Originally from Minnesota, she produced Minneapolis’ 10,000 Laughs Comedy Festival from 2017-2019.