A Conversation with Mokhtar Alkhanshali and Dave Eggers About His New Nonfiction Book, The Monk of Mokha 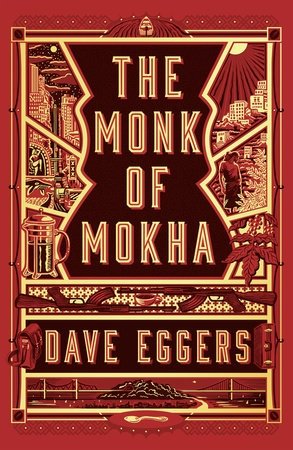 Dave Eggers’ new book The Monk of Mokha is a true story that weaves together the history of coffee, the struggles of everyday Yemenis living through civil war, and the courageous journey of a young man, Mokhtar Alkhanshali, following the most American of dreams.

Dave and Mokhtar spoke to Jordan Rodman about their travels together, how they each came to be coffee drinkers, and how Mokhtar is operating his coffee business during Yemen’s current challenges.

JORDAN RODMAN: This book is about coffee, but I understand that neither of you were longtime coffee drinkers?

DAVE EGGERS: I had my first cup of coffee when I was 35. My wife and I were new parents and sleep was elusive, so to stay awake and have even a little acuity, I needed a new source of caffeine — Diet Mountain Dew wasn’t working anymore. I will say that when you come to coffee relatively late in life, it has an otherworldly kick. But Mokhtar taught me how to appreciate coffee as more than a caffeine-delivery tool.

MOKHTAR ALKHANSHALI: I didn’t drink coffee much, mainly because the only coffee I was exposed to was cheap diner coffee that tasted like burnt popcorn. I thought coffee was too dark and bitter. One day I walked into a specialty coffee shop and had a cup of naturally processed coffee from Ethiopia’s Yirgacheffe region. I tasted blueberries, honeysuckle and it had a sweet lingering aftertaste. The barista spoke to me about where it was grown, the elevation, varietal, how it was processed — but most of all, how their direct relationship to these growers make it possible for the farmers to make more money and live a better life. That part of it really became my entry point to the world of coffee.

MA: That’s a question that a lot of people ask me. In many ways, I’m still trying to figure it out myself. To be honest, I didn’t have a master plan, I just felt there was a disconnect between Yemen and the world of coffee and I believed I could be that bridge. Looking back, I don’t know if I would have gone on this journey knowing all of the things I’d have to learn and go through. I was naïvely arrogant.

JR: Dave, as a relative newcomer to the coffee world, what was the research like for Monk of Mokha?

DE: Mokhtar and I had met before, but the first time we saw each other after he returned from Yemen was at the Blue Bottle headquarters in Oakland. James Freeman, the founder, happened to be there that day, so between Mokhtar telling me much of his story, and the setting, it was a really immersive first step. But I was still skeptical. My impression was that there was a lot of pretension in the specialty coffee world. But I learned that the obsessive care that goes into one cup of coffee is coming from the same place much of the slow-food movement is coming from. It’s a reversal of the dehumanizing effects of industrial food consumption. When it comes to coffee, listening to Mokhtar’s enthusiasm — and utter lack of pretension — really made me a convert. With any comestible, if you care about its quality, and if the people making it care, too, it will take longer and cost more.

Otherwise, the research took place on many levels, because the story has so many facets. There’s Mokhtar’s personal story — his upbringing and ambitions as a young man in San Francisco. There’s the Tenderloin neighborhood and, in contrast, the high-rise world of the Infinity, where Mokhtar worked as a doorman. There’s his extended family in the Central Valley, where we went early in the research process. Then there’s the world of coffee, from plant to cup. There’s Boot Coffee in Mill Valley, where Mokhtar learned about roasting and grading. I had to get familiar with all these worlds before we even went to Ethiopia, Djibouti, and Yemen.

JR: Mokhtar, you’ve done a fair amount of public speaking, and you’d given presentations many times to various audience before meeting Dave. How was that kind of storytelling different than what you did with Dave for the book?

MA: What I went through with Dave was a very intimate road trip. Dave was incredibly warm and someone I felt comfortable being vulnerable with. Some of those memories were hilarious and others required lots of tissues. Dave’s caring and loving personality were what made this book possible because I know I wouldn’t have been able to do this with anyone else.

JR: Dave, what drew you most to Mokhtar’s story?

DE: For me it was, first of all, a story of towering will and imagination. For a guy as young as Mokhtar to simply reinvent himself, to risk so much to re-create his life, it’s astonishing. The more I learned, the more remarkable his story became. I think it was about 18 months into our interviews when he told me that he sometimes had to carry a grenade on his jacket in Yemen, just to imply he was not to be trifled with — in the pursuit of coffee beans. When I met Mokhtar, he was a doorman, so to see what he’s built in these last five years, is just awe-inspiring.

JR: One of the striking things about the book is how fraught things are for you, Mokhtar, when you’re traveling through Yemen, simply trying to export coffee beans. You’re held at gunpoint many times, you’re kidnapped, you dodge bullets and bombs. And yet your attitude throughout is fairly positive. Are you just generally a fearless person, or does some absurdist side of you kick in during moments of grave danger?

MA: For most of my life I was terrified of small dogs so no, I don’t think of myself as a fearless person. People often ask how I managed living with violence and guns in Yemen. I grew up in Brooklyn and the Tenderloin [in San Francisco], the first time a gun was put in my face was here in the U.S when I was 11 years old. There are only two countries in the world that own more guns per capita than Yemen, and one of those is the US. In those instances that you mentioned of extreme danger in Yemen, I was able to not react but to respond and figure out what I needed to do to survive because I had already been equipped with that mechanism from an early age growing up in the inner-city in the US.

With the comedy, I know it’s hard for a lot of people to relate to in this day and age but my faith in God is really a big part of my life. There’s this idea in Islam called Tawakol, putting your trust in God, and so, in those situations, I just had to rely on my faith because logically there was no way for me to figure out how I would survive.That’s the thing about faith, it’s not based on facts and statistics, you just have to believe and let go and that is a very liberating thing. Without that, I don’t think I would have been able to laugh through those awful situations.

JR: Mokhtar, you come from a prominent Yemeni tribe, many of whom are still in Yemen. What are their lives like now, and what has it been like to see the country deteriorate over these last few years?

MA: The war doesn’t care what tribe you’re from, how old you are or even what political affiliation you have. There isn’t a family that I know in Yemen that hasn’t been affected by this war. I have family members trying desperately to apply for their loved ones to come to the US but because of the current administration’s travel bans, they are stuck waiting for approvals at embassies in Cairo, Amman, Kuala Lumpur and Djibouti. Eighty percent of Yemen is food insecure, 3.3 million people are displaced, and we’re currently in the midst of a cholera outbreak that has affected a million people.

JR: Mokhtar, you still operate your company, Port of Mokha coffee, which continues to import coffee beans from war-torn Yemen. How much more difficult has the work become, and how are your workers and farmers faring amid the chaos?

MA: It’s been challenging. Trying to run a business in the middle of an active war has its challenges. There are thousands of coffee farmers in Yemen whose sole livelihood is our work with them. Through our microloans we are paying for weddings, medical surgeries, and college tuitions, so for us, it’s a matter of being creative and persevering. Besides the material support that we send these farmers, there’s an internal impact that happens. These farmers are pouring their hearts into the coffee they produce and when they see it being showcased around the world in shops in Paris, Tokyo, Brooklyn, there’s a deep sense of pride for them. 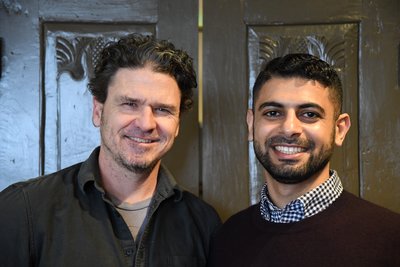 JR: Mokhtar and Dave, you two traveled to Ethiopia, Abu Dhabi, Djibouti and Yemen together. Do you have favorite stories from your travels?

MA: Hmm that’s a hard one. Besides those international trips, the local ones here were a lot of fun. Going down to visit my grandmother in southern California and hearing her tell her story, visiting my friend Jay Ruskey’s farm in Santa Barbara (the only coffee farm in the U.S), probably the most impactful trip for me was Djibouti. I didn’t tell Dave this but at the time I was terrified about going. Part of my therapy was to go into these places where I had a negative association because of past trauma. I wanted to go to Djibouti and face my fears.

Experiencing 130-degree weather and getting stuck in a sandstorm didn’t help, but when I left I felt a huge weight lift off of my shoulders and I’m always going to thank Dave for being there with me.

DE: I have a story. We spent a few years trying to get into Sana’a together, but when the war broke out, it was impossible for me to safely get into the capital. So we went to a more remote part of Yemen, and there we encountered an Italian man who was on a quest to visit every country on earth. He was very cynical, with a mordant humor that seemed at odds with a man so curious about the world. When he heard that Mokhtar imported high-end coffee from Yemen, and that Mokhtar was a Q grader — the equivalent of a sommelier in the wine world — he scoffed. He thought this was a pretentious affectation, a sign of the world’s decadence. “A coffee sommelier? What’s next?” he asked. But then, Mokhtar told his story and explained the world of coffee to this man — how Q graders can improve the lives of farmers, and how caring about where coffee, or any crop, comes from is actually a deeply humanistic thing. Mokhtar did all this while grinding and brewing fresh Yemeni coffee. By the time Mokhtar was pouring him a cup, the Italian wanted to know how he could invest in Mokhtar’s company. No joke, that all happened in about 15 minutes — this guy went from cynic to believer. The same thing happened to me, I guess.