About
Some Recollections
of a Busy Life. 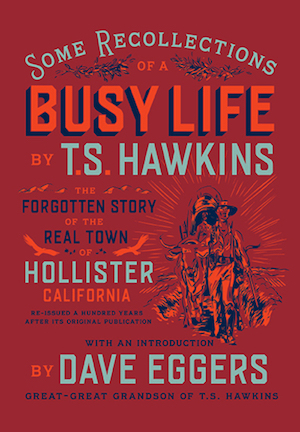 T. S. Hawkins led an astounding life. Born in 1836, he grew up just down the way from Mark Twain in Missouri, in a log cabin. He became a teacher at age 17, and owned his own general store at 21. A few years later, he set out in a covered wagon, and made his way across the plains to California. He and a few other farmers got together and founded the town of Hollister, and Hawkins went on to build a hospital in his granddaughter’s name. It stands today. In Some Recollections of a Busy Life, he tells his story.

Copies are going fast. You can purchase the book online at our store site.

Recollections is also being sold in a limited number of bookstores. Those include:

Click here to listen to an interview with Dave Eggers about the book on KQED’s Forum.