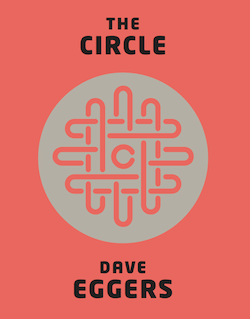 Set in an undefined future time, The Circle is the story of Mae Holland, a young woman hired to work for the world’s most powerful internet company. Run out of a sprawling California campus, the Circle has subsumed all the tech companies we know of now, linking users’ personal emails, social media, banking, and purchasing with their universal operating system, resulting in one online identity and a new age of civility and transparency. As Mae tours the open-plan office spaces, the towering glass dining facilities, the cozy dorms for those who spend nights at work, she is thrilled with the company’s modernity and activity. There are parties that last through the night, there are famous musicians playing on the lawn, there are sports teams and clubs and brunches, and even an aquarium of rare fish retrieved from the Marianas Trench by the CEO. Mae can’t believe her luck, her great fortune to work for the most influential company in the world—even as her life beyond the campus grows distant, even as a strange encounter with a colleague leaves her shaken, even as her role at the Circle becomes increasingly public.

What begins as the captivating story of one woman’s ambition and idealism soon becomes a heart-racing novel of suspense, raising questions about memory, history, privacy, democracy and the limits of human knowledge.

The Circle is being co-published by McSweeney’s and our longtime friends at Knopf. It will be available at your local independent bookstore soon.

Q: Is this book about Google or Facebook or any particular company?
No, no. The book takes place after a company called the Circle has subsumed all the big tech companies around today. The Circle has streamlined search and social media into one system and that’s enabled it to grow very quickly in size and power.

Q: The campus described is so vivid. People will assume you’ve been to all the Silicon Valley tech campuses, especially Google.
There was a point where I thought I should tour some of the tech campuses, but because I wanted this book to be free of any real-life corollaries, I decided not to. I’ve never been to Google, or Facebook or Twitter or any other internet campus, actually. I didn’t interview any employees of any of these companies, either, and didn’t read any books about them. I didn’t want to be influenced by any one extant company or any actual people. But I’ve been living in the Bay Area for most of the last twenty years, so I’ve been very close to it all for a long time.

Q: There are a lot of new programs and systems invented at the Circle. Given the speed that technology is moving in real life, was it hard to keep up?
A lot of times I’d think of something that a company like the Circle might dream up, something a little creepy, and then I’d read about the exact invention, or even something more extreme, the next day. It happened with the names of some of the software and system features, too. I had to change a few names when I realized they already existed. But in general, I tried to write a book that wasn’t so much about the technology itself, but more about its implications for our sense of humanity and balance.