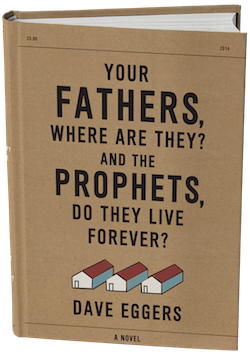 On June 17, McSweeney’s and Knopf will release Your Fathers, Where Are They? And the Prophets, Do They Live Forever? a new novel by Dave Eggers.

It begins in an abandoned military base on the California coast, where a troubled young man named Thomas has brought an astronaut, in hopes that he’ll answer Thomas’s questions. The book then takes one unexpected turn after another, as Thomas finds that every answered question gets him closer to solving the riddle of his life but also further away from any sort of peace.

You can preorder a copy of the book at your local independent bookstore, such as Powell’s.

Also! For a very limited time only: Subscribe to the Quarterly and get a signed, first-edition copy of Your Fathers, Where Are They? And the Prophets, Do They Live Forever?—only 50 available!

Q: The title is from the Old Testament. Why did you choose it?

A: It’s from Zechariah, and in my book it’s alluded to by one of the characters. With that character, and with Thomas, there’s an Old Testament sense of right and wrong—great praise and everlasting peace for the righteous, and eternal damnation for the wrongdoers. It felt an appropriate passage for a damaged young man to grapple with, and it felt fitting as the title. There’s a dark and baroque music to the Old Testament that I was trying to evoke in the novel as a whole.

Q: This novel comes out less than a year after The Circle. Do you see themes in common to both?

A: The strange thing is that I wrote most of Fathers/Prophets before The Circle. I finished a draft in early 2013, and then set it aside. More than anything I’ve done before, it took on a life of its own, and when I finished it I wanted to let it cool for a while before I thought I could look at it objectively. So after The Circle, I went back to it, and was able to edit it and rewrite it with more clarity than if there hadn’t been that extra year. But it still felt strange and wild, not exactly like something I’d had a controlling hand in making. It was like some demon baby.

Q: Why all dialogue? There’s a certain disorientation that happens at the beginning, because we’re searching for some context, or what in a play would be stage direction. But the book is entirely dialogue.

A: When I started the book, I hadn’t planned on it being only dialogue. I knew it would be primarily a series of interviews, or interrogations, but I figured there would be some interstitial text of some kind. But then as I went along, I found ways to give direction and background, and even indications of the time of day and weather, without ever leaving the dialogue itself. So it became a kind of challenge and operating constraint that shaped the way I wrote the book. Constraints are often really helpful in keeping a piece of writing taut.

Q: The story starts with Thomas having brought an astronaut to an abandoned military base, to ask him questions about national pride and the trajectory of both of their lives. Why do you think Thomas felt the need to do this?

A: Thomas is a baffled young man. And to a baffled young man, the idea of kidnapping an astronaut might seem a logical, or even necessary, means to an end. Thomas feels he hasn’t gotten a lot of things he’s needed or wanted in life, and now he’s trying to find out exactly why that is. One means to figure out why is to stop time, as he puts it, and bring someone like Kev Piciorek, the astronaut, to this army base, to get some questions answered. He thinks if he can get answers, maybe his path forward will be clearer. But the questions lead him into much rougher country than he’d planned.

Q: Thomas’s concerns are particular to a young American man, it seems.

A: I don’t know. I don’t think so. Troubled young men are everywhere, and Thomas’s brand of confusion—a strange mix of national pride and revulsion with so many of its systems and failures—could be found anywhere on the globe. And we see desperate acts from these sorts of men every day.

Q: But Thomas commits no violence. He seems so apologetic about bringing Kev to the base in the first place.

A: Right. In Thomas’s case, he’s not a violent person. He’s deeply sorry about having to do what he has to do to get his questions answered. I think part of him can’t believe he’s had to resort to the methods he’s employed.

A: I think a million is probably a low estimate. I would argue that everyone knows someone like Thomas—and a smart and disappointed young man can be a volatile thing. Thomas knows this, too, and knows that someone like him should be best kept apart from everyday society.

Q: Marview is a fictional place, but Fort Ord is real. How did you choose these settings for the story?

A: Fort Ord is real, but it’s not real in the same way it once was. It’s abandoned and falling apart—a rapidly decomposing document of the Cold War. But it’s beautiful, too, and you can get lost in it for days. So when I thought of Thomas I wanted him to have grown up near the base, having an uncomfortable relationship with it—a place that inspired him with dreams of militaristic triumph, but also put him and his family in dire straits when it closed. Thomas is from a fictional town called Marview, the sort of town where nonmilitary workers at the base would have worked, the sort of town that would be hollowed out or outright forgotten after the base was decommissioned.

Q: Other characters occur in the book. A congressman, for instance, and a teacher, a police officer. Are these archetypes, or versions of real-life people?

A: They’re not based on anyone real, but they’re not archetypes, either—at least not for me. But in some cases, for Thomas they are. There’s an astronaut, a congressman, a cop, other central figures in the psyche of a certain kind of man. With each, he struggles between the real person in front of him, and the archetypal expectations he has for each.

Q: The book is very funny in places, which surprises us given the context.

A: I think Thomas is self-aware enough to know that he’s created an absurd situation, and he’s both sorry for having done it, and polite enough—I think he really is polite—to try to lighten the mood.

Q: Is it important that the book is set in the West?

A: Yes and no. Thomas definitely identifies with the West, and rightfully or not he’s internalized the mythology of the West, and feels he’s owed some of the glory of the frontier. So it’s important that he’s at the end of the country, and feels he has nowhere to go. He’s like the bear on the California flag. These are huge mammals that need a range of three hundred miles or so to thrive. Well, there aren’t three hundred miles anywhere anymore in California, so basically the bears have been driven to the sea. That’s where and what Thomas is, too—a suddenly unnecessary animal driven off the edge of the continent.

Q: Thomas feels that the promises made to him as a son and an American have been broken. Who is ultimately responsible for the fulfillment of these promises?

A: I don’t think that question is answerable in a tidy way. But I really don’t know that Thomas is asking for someone to give him that fulfillment. I think he recognizes that he’s of the species that needs to be inspired, that he needs that north light, that Polaris, to guide him, and that he’s lived a life of nights without stars.