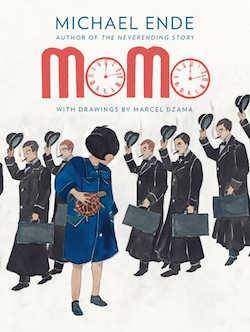 After the sweet-talking gray men come to town, life becomes terminally efficient. Can Momo, a young orphan girl blessed with the gift of listening, vanquish the ashen-faced time thieves before joy vanishes forever?

With gorgeous new drawings by Marcel Dzama and a new translation from the German by Lucas Zwirner, this all-new 40th anniversary edition celebrates the book’s first U.S. publication in over 25 years.

Today, we’re featuring an excerpt from the second chapter of Momo. To preorder the book, please click here.

The thing that Momo could do better than anyone else was listen. Now, many readers might say that being able to listen is nothing special—anyone can do it—but they would be altogether mistaken. Very few people can really listen, and the way Momo practiced the art of listening was unique.

Momo listened in a way that made slow people suddenly have the cleverest ideas. She didn’t ask or say anything in particular that would bring them to these thoughts. She merely sat and listened with the utmost attention and sympathy, fixing her large, dark eyes on them. And when they finally stumbled upon an idea that they had never even dreamt of before, they felt like it had come from deep within them.

She listened in such a way that anxious and indecisive people suddenly knew what they wanted. Shy people suddenly felt brave and free. Unhappy and depressed people suddenly became joyful. And when someone thought that his life was a meaningless failure, and that he was just one among millions of people who could all be replaced as easily and as quickly as a broken pot, then he would go and explain everything to Momo. Even as he spoke, it would become clear to him, in some mysterious way, that he was fundamentally mistaken, that among all the people in the world there was only one of him, and that he was therefore important in his own particular way.

This was how Momo listened.

One day, two men came to Momo’s amphitheater. They had gotten into such a vile dispute that they were no longer on speaking terms, even though they were next-door neighbors. Their friends had told them to visit Momo because it wasn’t right for neighbors to live as enemies. At first, the two had refused, but in the end they had begrudgingly given in.

So now they were sitting in the amphitheater, silent and furious, each opposite the other on one of the stone rows of seats. Both were glowering to themselves.

One of them was a bricklayer. His name was Nicola, and he was a burly man with a black mustache that curled up at the ends. The other one was Nino. He was skinny and always looked a bit tired. Nino was in charge of a small pub at the edge of the city that usually had no more than a few old men in it, who spent the entire evening over one glass of wine reminiscing about bygone times. Nino and his plump wife were also Momo’s friends, and on more than one occasion they had brought her some very tasty snacks.

Momo quickly realized how angry these two men were at each other, and she didn’t know which one she should go to first. In order not to insult either, she sat down between the two of them. Then she turned her head from one to the other, looking at them both in turn, and waited to see what would happen. Some things simply take time, and time was the only thing that Momo had in abundance.

After the men had been sitting like that for a while, Nicola finally got up and said, “I’m going. I showed my goodwill just by coming here, but as you can see, Momo, he won’t budge. Why should I stay any longer?” And he turned to leave.

“Yeah, get out of here!” Nino yelled after him. “You didn’t need to come in the first place. It’s not like I’m going to apologize to a lowly thug!”

Nicola spun around. His face was bright red with fury. “Who’s the thug here?” he asked threateningly, walking back. “Say that again!”

“As often as you want!” Nino screamed. “You think that because you’re big and tough, no one’ll dare tell you the truth. But me, I’ll tell it to you and anyone else who wants to hear it.” He paused. “You heard me! Why don’t you just come over here and murder me. You already tried to the other day!”

“I wish I had!” roared Nicola, clenching his fists. “You see that Momo, see how he’s smearing me with his lies. I only grabbed him by the collar and threw him in a puddle of dirty water behind his pub. I couldn’t even drown a rat in there.” And then he yelled at Nino again, “Unfortunately you’re still alive and kicking! All the worse for me!”

For a while a storm of insults flew back and forth, and Momo couldn’t even put together what had happened or why the two were so furious at one another. Little by little, it came out that Nicola had only committed his outrageous act because Nino had slapped him in the face. But Nino claimed that Nicola had first tried to smash all his dishes.

“That’s not even true!” Nicola bitterly responded in his defense. “I threw a single jug against the wall, and it already had a crack in it anyway.”

But Nicola was convinced that he had had every right to do what he had done because Nino had insulted his honor as a bricklayer. “You know what he said about me?” he yelled at Momo. “He said that I couldn’t build a straight wall because I’m drunk day and night, and he also said that my great-grandfather was one of the drunkards who helped build the Leaning Tower of Pisa!”

“Ha!” growled Nicola. “I can’t laugh about things like that.”

It turned out that Nino had insulted Nicola as payback back for a different joke. One morning Nino had woken up to find ONLY A LOW CREEP EVER BECOMES A BARKEEP written on his door in red paint, and Nino, for his part, hadn’t found it funny at all.

For a while they argued in earnest about which of the two jokes had been better, working themselves back into a rage, but suddenly they stopped.

Momo was staring at them wide-eyed and neither of the two could quite understand her gaze. Was she laughing at them both on the inside? Or was she sad? Her face betrayed nothing, but the two men suddenly felt as if they were seeing themselves in a mirror, and they became ashamed.

“Okay,” said Nicola. “Maybe I shouldn’t have painted that on your door, Nino, but I wouldn’t have done it if you hadn’t refused to serve me a glass of wine the night before. That was a low blow, and you know it! I always pay! You had no right to treat me like that.”

“Oh really?” Nino spat back. “Don’t you remember the business with that picture of Saint Anthony? Yeah, now you’re getting pale! You pulled a fast one on me, and I don’t put up with stuff like that.”

“I cheated you?” yelled Nicola, putting his hand to his head. “It’s the other way around, my friend! You wanted to take me for a ride, but it didn’t work out!”

This was the story: There used to be a picture of Saint Anthony hanging on the wall in Nino’s pub. It was a color print that Nino had cut out of a newspaper and framed. One day Nicola said he wanted to buy the picture from Nino—supposedly because he thought it was beautiful—and after a lot of slick bargaining, Nino finally convinced Nicola to trade him his radio for it. Nino laughed himself silly because Nicola was clearly on the losing end of the deal.

But it turned out that there was money tucked between the picture and the back of the frame that Nino hadn’t known about. Suddenly, he angrily realized that he was the one who’d been outsmarted. In short, he demanded that Nicola give him back the money because it didn’t belong to the bargain. Nicola refused, so Nino decided he wouldn’t serve him anything else to drink. That was how the fight had originally begun.

Once the two men had traced the episode back to its beginning, they fell silent for a while.

Then Nino asked, “Now tell me honestly Nicola, did you know about the money before the trade?”

“Of course, otherwise I would have never given you my radio.”

“Then you did swindle me!”

“What? Didn’t you know about the money?”

“Well, there you are! It’s pretty clear that you were trying to cheat me. How else could you be willing to accept my radio for a worthless scrap of paper, huh?”

“How did you even know about the money?”
“I saw a customer stick it back there as an offering to Saint Anthony two nights before.”
Nino bit his lip. “Was it a lot?”

“No more and no less than the value of my radio,” answered Nicola.

“Then our entire argument,” said Nino thoughtfully, “is actually about a newspaper clipping of Saint Anthony.”

Nicola scratched his head. “I guess so,” he grumbled. “You can have him back if you want, Nino.”

“No way!” answered Nino in a dignified voice. “A deal’s a deal! After all, we did shake hands on it.”

Suddenly they both burst out laughing. They climbed down the stone steps, met in the middle of the round piazza, threw their arms around one another, and slapped each other on the back. Then they both took Momo down and said, “Thank you very much!”

When they left a little while later, Momo stood waving after them for a long time. She was glad that they were friends again.

Another time, a small boy brought her a canary that wouldn’t sing. This was a much more difficult assignment for Momo. She had to listen to it for an entire week before it finally began to trill and whistle again.

Momo listened to everyone and everything: dogs, cats, crickets, toads, even the rain and the wind in the trees. And everything spoke to her in its own way.

On some nights, when all her friends had gone home, she would sit alone for a long time in the old theater’s large, stone rotunda listening to the deepening silence while the starry sky arched high above her.

Whenever she did this, she imagined that she was sitting in the middle of a giant ear that was listening in on the entire cosmos, and she often thought she could hear soft but powerful music that went straight to her heart. On those nights she always had especially beautiful dreams.

Anyone who still thinks that listening is nothing special should simply try to do it half as well.