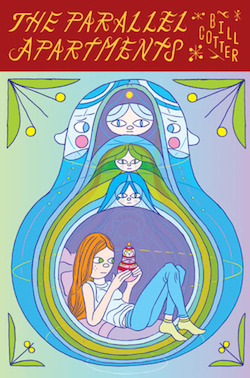 A Texan Gabriel García Márquez who writes tragicomic twists reminiscent of John Kennedy Toole, Bill Cotter produces some of the most visceral, absurd, and downright hilarious sentences to be found in fiction today. His new book, The Parallel Apartments, is a bold leap forward for a writer whose protean talents, whose sheer exuberance for language and what a novel can do, marks him as one of the most exciting stylists in America.

As Heidi Julavits put it, “Reading Bill Cotter’s The Parallel Apartments is like taking some kind of word drug, but a new one, synthesized in a desert lab from molecules of Lipsyte, Dickens, Pynchon, Williams, Chabon, DeWitt, and Joyce, and then spun together with Cotter’s own unique particles to yield a book that produces an actual high when read.” Today, we offer an excerpt from the book, which comes out next month and can be pre-ordered here.

Kelly was in his early thirties but looked ten years younger. Bamboo-skinny, big-eyed, plush-lipped, his melon-like head shingled with stiff plates of red hair, his skin so pale he appeared to fluoresce in the dim bar. This hangdog mingle of features begged insults, flimflams, and beatings. But only newcomers and fools were ever led on by his meek appearance; the regulars knew Kelly’s aspect belied a belligerent, uncharitable nature that best went untested. There were plenty of tough folks in Kelly’s, with a lot of time spent in jails and other locked places, but they did not antagonize Kelly, partly out of respect for his deceased father, and partly out of respect for their own health. Kelly carried around a big rusty socket wrench, with which he had over the years splintered many a wagging jaw. When he was in junior high he’d maimed a classmate with a winch chain over an auto- graphed Stan the Man baseball and got shipped off to reform school. It happened to be the same place that Lou had been sent for impregnating his girlfriend, Charlotte; he and Kelly arrived on the same day. Though they’d never been friends, it was Lou whom Kelly had chosen to accompany him on his escape a year later, mainly because Lou was good-sized and strong, and would be able to carry a big bag of Kelly’s clothes. Kelly was something of a clotheshorse, or at least thought himself so.

Kelly certainly hadn’t changed much in three weeks. Today he wore 1930s-style suspenders over some kind of shiny shirt. He looked like a dolphin that also happened to be an attorney.

Kelly had taken over the joint a couple of years before, after his father died following a sea-nettle sting. Bogue had been a truly fair and generous man, who had over the years extended to Lou, and quite a few other patrons, carelessly generous tabs. Lou’s tab had amounted to $4,940, or at least that was the number Lou recalled Bogue last mentioning to him, which had been about a month before the sea nettle lanced Bogue’s beer belly.

Kelly had never brought up the subject of the delinquent tab to Lou or to any of the other betabulated patrons after he took over, so Lou figured the numbers had been mercifully lost in probate. Or maybe Bogue had never written the numbers down in the first place; maybe he’d just been a specialized idiot savant and kept the sums in his head and they had been buried along with the rest of the man. Either way, it looked like the days of bar tabs were over: Kelly, on his first day as the new owner, announced in his high-pitched Piney Woods bray that no one gets a tab.

“Nobody,” he’d whinnied. “Even Dot?” somebody said.

“Nobody.” Bogue hadn’t kept a tab on Dot; he just gave her whatever she wanted, and had done so ever since she first set up business at the jukebox end of the bar, ten years before. Bogue claimed that it was just sound business to underwrite a whore’s drinks, but his real reasons were probably much more soft-hearted—everyone knew he adored her.

“I worry, I worry,” Bogue would fretfully say to anyone who was too drunk to escape a conversation with him whenever Dot was out on a service call or just taking the day off. “She’s like my only daughter I never had instead of the son I did. Oh me.”

Dot’s eyes were just like Sophia Loren’s, and she moved with the grace of Audrey Hepburn. Dot was legendarily rumored to have entered the service industry because she liked it. She said it made her wealthy enough to be able to pursue her hobby, which was collecting first editions of fiction by women.

One day she brought in a nice Mockingbird to show Bogue, but he wasn’t there. Kelly was there instead. He pushed a Tom Collins across the bar.

“Daddy’s dead. Funeral’s at Emken-Linton. This is your last one on the house.”

Paying for her own drinks—expensive, complicated mixed beverages, the recipes for which Bogue had often had to look up in a tattered copy of Cocktail Boothby’s American Bartender—forced Dot to raise her rates, which in turn made her less accessible and more desirable. These circumstances excited discontent among the patrons, a state to which Kelly responded not by refelting the pool table or sharpening the darts or updating the jukebox, but by raising the beer prices, rationing the swamp cooler, taking away the baskets of free pork skins and substituting nickel baskets of humid popcorn, and, most memorably, removing the free-coffee station and in its stead installing a knee-high cinder-block postament upon which he had placed a life-size fake-marble sculpture of a nude, ill-proportioned Gidget lying Madame Récamier on a fake-marble surfboard, the whole installation footlit with soft incandescents.

Lou stepped down into the barroom. He felt the spongy give of spilled stale popcorn underfoot. He detected the vague vetiver base note of Dot’s Chanel No. 22. Dot herself was nowhere to be seen, but her purse was on the bar next to one of her leather diaries and a fancy-looking mixed drink.

Many of Lou’s friends and acquaintances were sitting around, drinking beer, watching a Braves-Giants game, and rapidly eating what looked like beer nuts. Scattered among the patrons were half gallons of milk and rolls of paper towels. This was all new in the last three weeks.

Lou sat down at a table with his old drinking buddies Doak Boyle and Tom Vlodzny. On one arm Doak wore a cast with hundreds of little dollar signs drawn on it in Magic Marker.

“What’s this? Eggnog?” said Lou, picking up a milk carton and sniffing at it. “And, what, no popcorn? What’re these things? What’s got into Kelly? What happened to you, Doak? Where’s Dot?”

“I wasn’t ready for a pop quiz,” said Doak. “It’s not eggnog,” said Tom. “Milk.”  Doak took the carton out of Lou’s hand, took a big pull, ate a handful of the beer-nut things, drank half a bottle of beer, then pointed to a roll of paper towels. “Hand me that Bounty.”

Lou handed the roll over. Doak pulled off a few sheets. He swabbed his forehead, dabbed at the tears on his cheeks, and blew his nose. Finally, he took a deep breath. Then he ate another handful of nuts.

“These’re little peppers,” said Tom. “Pequins. Tasty. Warm. Habit-forming. The milk’s to cool yourself down and neutralize the digestive fireworks. Works better’n beer. Bounty’s for stanching the sinuses, and for swabbing the brow.”

“That right,” said Lou, tossing a modest handful of peppers into his mouth. “That was charitable of Kelly.”

“Not really,” said Doak, panting and wiping the sweat off his neck. “The pequins and the Bounty are free. But the milk’s five dollars a carton.”

To pre-order The Parallel Apartments, please visit our store.

Also: Check out Bill’s Kickstarter page for his book tour!