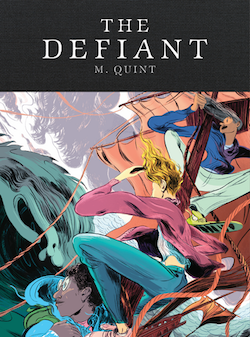 On a field trip to see famed privateer Francisco Ventana’s once-sunken ship, the Defiant, six kids from San Francisco’s Greenly School — a last-chance refuge for orphans, troublemakers, and misfits — find themselves stranded at the center of a storm unlike any other. By the time the clouds have cleared, and the strange pink flashes have faded from the sky, the Defiant is out on the open sea, San Francisco ablaze behind it. What follows is an adventure that will change the classmates’ lives forever — a journey across a dangerous ocean in search of a new home, with only their instincts and each other to rely on. Can they master the ship? Can they work together, and defend themselves against the unexpected adversaries they encounter on the way? Will they ever find land? You’ll have to join their voyage to find out.

A remarkable debut in the tradition of Gulliver’s Travels and Lord of the Flies, M. Quint’s The Defiant creates a world that’s all its own — thrilling and wholly original, filled with strange energies and superstitious survivors, and dozens of moments you won’t soon forget.

Today we’re featuring an excerpt from the book, which comes out on September 29, 2015. Mac Barnett, the bestselling author of the Brixton Brothers and The Terrible Two series, calls it “by turns exciting, dark, and moving — it’s a hallucinatory and mysterious take on the pirate novels I loved as a kid.” You can order the book, which features more than 20 illustrations by Lily Padula, at the McSweeney’s Store.

Back on deck, Farn opened the floor for any questions. Instantly, Carlos’s hand bolted into the air.

“How do we know all the stuff you told us is right?”

For a moment, Farn looked taken aback. “Well,” he replied carefully, “the Institute for Nautical Archeology issued an extensive report on the excavation and restoration of the Defiant that you are welcome to read yourself.” He crossed his arms defensively. “But even before that, studying these great ships has been my life’s work. Of course, examination of various documents and manuscripts can help describe the practice of Iberian shipbuilding, but regular records weren’t kept until the sixteenth century—long after the Defiant had already been lost. In this ship’s time, such information was safeguarded in the minds of skilled masters who passed on their traditions orally, from generation to generation. Their secrecy ensured that their knowledge would not be stolen by competitors. They left nothing in writing, except for—”

Farn turned. Without anyone noticing, Gabriel had slipped away from the group again, and was now standing before the great glass box he’d passed by before. It nearly reached his chest.

The students scrambled across the deck, eager to see what Gabriel had found. They crowded around the box, jostling each other to get a better look. And there, inside the case, resting on raised blocks, was an enormous, ancient book. It lay open at its center, a long length of deep crimson satin resting in the spine like a tongue. Long, fluid curls of ink swept and dipped across the pages, dancing along in a bold hand. 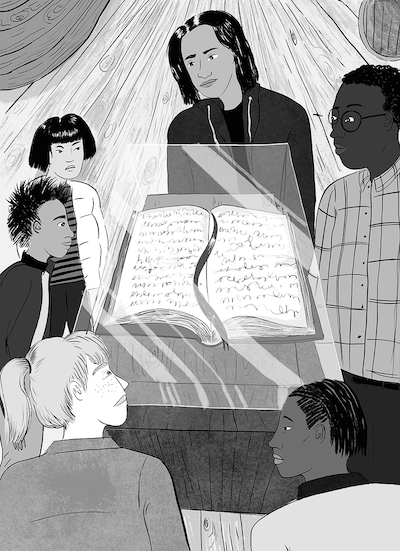 “What is it?” Esme breathed.

“The Codex Mare.” Farn’s grey eyes glittered as he spoke the name. “I was—”

“Everyone can ask questions at the end.” She turned back to Farn. “Please, go on.”

Farn gave the teacher a tight smile, then turned to the students. “It was Ventana himself who wrote it,” he said. “It’s part journal, part instructions for operation and maintenance of the Defiant. Its latter third is composed entirely of maps—from Portugal down past Africa through the South Atlantic, up across South America through the Pacific and into the New World.”

“I know that,” Rose snapped.

“Ventana’s maps,” Farn continued, “chronicle which islands he found along the way had reserves he could use—meaning food and fresh water.” Farn tapped the glass with a crooked index finger. “I hope you children realize what an enormous privilege it is to actually see the Codex Mare in real life. Until 1992, historians could not even say absolutely whether the Codex was real, or simply legend.”

“Why not?” Rose and Baron said together.

Farn let the tension build in the air for a few more seconds, then went on, his words echoing the thought running through Gabriel’s head.

“It was missing for nearly four hundred years!”

“Where was it?” Carlos cried out.

“Now, now,” Farn warned, “that’s a fair question.” Carlos stuck out his tongue at Quincy, but Farn ignored them both. “There are some theories as to its whereabouts during that time. It’s believed that the Codex was secretly passed from hand to hand among Spanish sailors in the hundred years after Ventana’s death in 1468. This was done to maintain control of Ventana’s routes. After that it seems that the Portuguese and Germans had it for a time—possibly the British, too. We can infer this from the inscriptions on the back inset page, where those in possession of the Codex wrote their names. But the names stop at 1601, and there are no records of its use after that until it was discovered in 1992, in the wine cellar of an old Spanish monastery.”

Standing on her tiptoes, Rose looked up from the Codex and frowned. “I can’t understand it.”

“That’s because it’s in Spanish,” said Baron, adjusting his glasses.

Gabriel didn’t move. Silence wrapped around the deck as all eyes fell on him. Esme was just about to repeat herself when Angelica cackled, “Muy bien.”

“I wouldn’t laugh, young lady,” Farn said, his low voice rolling across the deck. He peered down at Angelica.

“Why’s that?” she mumbled, casting her eyes away from Farn’s stern look.

“In Ventana’s time, there was no more coveted item than the Codex Mare. Rival explorers fought fierce battles for its possession long past Ventana’s death.”

Angelica looked up cautiously at Farn.“Why?” she asked.

“The Codex contains all the secrets of the great seas,” Farn replied, his face serious and drawn with purpose.

“You couldn’t sail without the Codex back then?” Carlos breathed, his nose pressed against the glass case.

“Of course it was possible to sail without the Codex,” Farn said, turning toward the younger boy. “But explorers often perished along those dangerous journeys, drifting into deadly waters or perilous islands. Or they might have failed to find land at all, and simply starved to death. It was Ventana who blazed the path from Portugal to the Americas and back again, sailing it more times than any other explorer. He documented the route thoroughly. The Codex holds that documentation.”

“But with the Codex in their possession, they had a secret weapon: Ventana’s knowledge of the seas.”

Farn let the silence that followed hang in the air a moment before shattering it with another loud clap.

“Now. Navigation! Who knows how Ventana knew where he was sailing? How he found his way.”

“Exactly! Yes!” Farn did a little hop in the air and whirled toward Quincy. “But how?”

Quincy gave an indifferent shrug. Farn was poised to press the question when a loud sigh broke out from behind him. He turned to find Baron, eyebrows raised, lips pursed.

“They used Polaris. The North Star. Because of the earth’s rotation, the stars appear to travel across the night sky in circular arcs. Except for the North Star. That stays fixed. Making it an ideal point of reference by which to navigate.” Baron grinned and looked around eagerly, awaiting his ovation.

Rose was rubbing the red bump on her forehead. Ms. Inez was fiddling with her phone. Angelica was making kissy lips at Rodney. And Gabriel was bent over the glass box, Carlos just beside him, bouncing on his toes. Nobody was paying any attention to Baron at all.

Gabriel felt his face grow hot. He had spoken Spanish with his parents when he was small, but that was a long time ago. The script in the book was almost unrecognizable. He coughed once, trying to shift the prickle in his throat. No luck. Maybe he could pick out enough to gather a basic understanding of what the pages said. Brushing the hair from his eyes, he leaned his long body still closer to the book before him.

Gabriel looked back to the Codex. The shifting clouds above were casting strange patterns on the surface of the glass, making it harder to see. “Then he starts talking about going east, about needing to get to an island. He needs to get there fast.”

“I don’t know.” Gabriel shook his head. “The page ends there.”

“Can we turn the page?” Carlos pleaded. Farn smiled back at him indulgently.

“I’m afraid not. The Codex must be kept under glass in order to preserve its delicate pages, and to keep it safe from the elements.” He lifted his hands to the dark sky as if to demonstrate.

Gabriel frowned. “But that doesn’t make sense. I mean, didn’t Ventana write it so people would know how to—”

Before he could finish, a blinding flash—more brilliant than a hundred bolts of lightning—exploded above them, and the students looked up just in time to see a bright pink blaze rip across the sky.

To preorder The Defiant please visit our store.