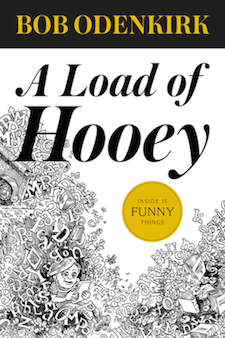 A Load of Hooey, the first book from the extremely funny Bob Odenkirk, will be released on October 7, 2014—33 days from now. It is the first in what will become the best-known humor imprint in the world, The Odenkirk Memorial Library. In anticipation of its arrival, we spoke to Mr. Odenkirk last week.

When did you realize you wanted to put a book of your writing together? Are there other books you had in mind, while working on this one?

I’d been collecting pieces at the urging of my friend Mike Sacks for about two years. I thought there would be a book in it one day, maybe posthumously (hey, I’m writing this in August, I could still make that happen!!). Mike passed what we’d collected along to Dave Eggers, unbeknownst to me, and Dave thought it deserved printing now, not later. I am glad he did.

Peter Cook has a great collection of writing and riffing entitled Tragically I Was an Only Twin—I’ve been a fan of that for a few years now. And of course, there are those old Woody Allen collections. And Steve Martin’s Cruel Shoes (I’m old!). Those were the templates here. Read those books AFTER you buy and read mine, please.

Do you feel like you used a different approach here than you’ve used for writing for TV? Or do book ideas and TV ideas come from the same primal place?

It’s a very similar process. My brain sifts through the things I’ve been noticing about “life” and “the world around me,” and out comes a comical exaggeration. Of course, in a book I can do pieces like “Her Laughter,” which are really about a kind of writing. That’s something you can’t do so well in a short film or sketch, unless your sketch is just you standing there, reading something.

A few of the pieces in the book did start as a sketch—most notably “Happy Ending,” which I did onstage in my last tour, where it went over like a house on fire, which I think means: people died horribly.

Your book features both Jesus and Hitler, as well as the Beatles. How did you go about inhabiting these characters?

They are just the voices that come through the material. The Beatles we’ve all heard many times, but the idea of a mean-spirited Paul McCartney is funny to me—he seems like such a crazily upbeat person. And I actually don’t write from Jesus’s perspective, but from Lazarus’s (their second meeting), so that didn’t feel presumptuous. Hitler, well—everybody gets to impersonate Hitler and have fun with his persona and travails for ever and ever. That’s his real punishment.

Bob Odenkirk is available for a limited number of interviews in the weeks to come. If you’re interested in setting one up, please email gabrielle@mcsweeneys.net.