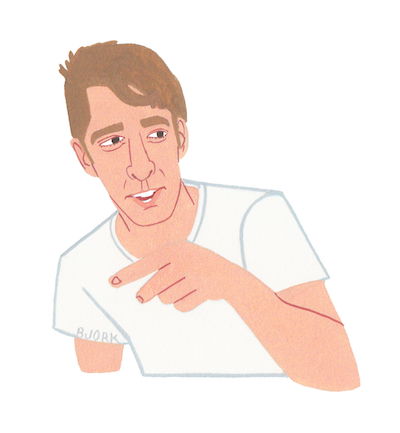 “When I was living in Seattle, I was working in books while trying to work on books. Then I left and crisscrossed the country. Today I’m in the Bay area. At this very minute, I’m sitting in the park pictured in the opening scenes of Full House,” says Alan. We’re on the phone, so I visualize Alan as a blurry, lone figure, seated on a shadowy bench somewhere, surrounded by distant squirrels. We had to have been near one another the night of the shooting, but neither of us can remember. I ask how his feelings were affected in the long haul. “I have some vivid memories, but I wouldn’t say I was shaken to the bone. I had a moment of fear during the recognition of extreme violence, but afterwards, I spent more time thinking about the events in terms of general issues, like gun violence, and gun rights, and mental-health resources, and gentrification. But maybe only because that was easier than actually addressing the way it affected me. The personal trauma has been harder to parse through,” he said.

“I’ve told my own story enough times to notice I always end up organizing my memories of that night around this relationship that’d gone awry,” he said. “The full year leading up had been a string of romantic tragedies. I’d moved to Seattle with a woman who was, like, The (Then) Love of My Life. But after we moved, it steadily became clear it wasn’t gonna work out, and we broke up. I was at the point where I was just starting to date again, and I was feeling excited to be out in the world and living my life.”

“So I was at the Twilight that night on a date. A first date. It was with a young woman I’d recently met. She lived nearby, and we’d agreed to meet and do karaoke that night. As I was waiting for her, I was thinking about what song I was gonna sing to sort of impress her. It was tough for me to decide, because I was transitioning out of an old karaoke standard I’d done for years, “Stroking” by Clarence Carter. Which isn’t exactly the song you sing on a first date. It doesn’t present well. I was flying with the idea of doing UB40’s cover of “Can’t Help Falling in Love,” but that one was also maybe questionable in its own way. So it might’ve been a good thing it didn’t happen,” he said.

“She, like, stood me up. She stood me up. In hindsight though, thank god, you know? I’d remember I’d been there long enough that it was just starting to sink in, that this person probably wasn’t gonna show.1 At the same time, I was trying to embrace it. I was like, ‘Whatever. I like this place. I always have good nights here. I’ll do a song and have a couple beers then maybe go home.’ That was where I was when it started happening. I was settling into a beer, and everything started unfolding, and then it was all over,” he said.

When the first gunshot went off, “I’d filled out the karaoke request slip, but I hadn’t turned it in yet. I was sitting by myself at that little bar area that pokes out into the dining room, and I was looking directly at the door. I was facing him as the door burst open and he walked in. The whole thing probably lasted 30 seconds, but it became the main image in my mind. It still hasn’t left. It’s the image of the door guy falling back into the hallway, and then I see the guy, like, stepping over him with the huge fucking gun in his hand,” said Alan.

Alan recognized the shooter. About twenty minutes earlier, the same man had been arguing with his girlfriend Whitney at the bar. “It didn’t register immediately that he was coming back to kill his girlfriend. It was more like, ‘This is the guy who was just here, and he was pissed. Now he’s got a gun, and it’s in the air, and he’s coming towards me.’ Those were pretty much my thoughts,” said Alan.

I have Alan back up and tell me what he remembers about this argument. Alan said Whitney had been seated nearby when James appeared and confronted her. “I had my back to them most of the time. I looked back initially to make sure he wasn’t yelling at me. He was basically close enough that he could’ve been in my ear. I tuned in and got the gist of what he was saying. I heard a couple things about his house being broken into and something about a dog or a baby. None of it really made sense, and I didn’t think he seemed intoxicated. I just didn’t know what to do, if anything, in that situation. By the sounds of him, I figured whatever was going on was highly emotional, and therefore it was kind of nonsense. I was like, ‘Well, fuck it. Unless something behind me starts getting physical, I don’t really care to involve myself in a lover’s spat right now.’ In the way they were interacting, it seemed like there was some bigger mental issue at stake. He was speaking his own language. I wouldn’t have guessed any of the other patrons knew what was going on. Maybe she didn’t either. But I think because we couldn’t understand him, people were more dismissive about it, like, ‘This guy is fucking crazy. I’m not even gonna pay attention.’”

The bouncer escorted James outside. As previously described, about twenty minutes passed while Alan sat quietly, picking out songs and thinking about girls. Then James returned with a gun, shot the bouncer Greg, and reentered the building. Alan realized he wasn’t being targeted as he observed James approaching the lounge. “He was looking in my direction, but he was looking directly through me. I wasn’t even on his eyeline. He wouldn’t have known I was standing right there. The girlfriend wasn’t right behind me, but he had to walk past me to get to her. His maneuvers were purposeful enough that I didn’t get the impression he was after anyone else.”

“I knew I needed to get out. The reality of what could potentially happen as a worst-case scenario was very clear to me,” said Alan. “I dove under the counter and started to crawl under the tables. Then all of a sudden I realized that I’d stopped. Everyone else was still moving, and I’d just stopped. Maybe at the time, there was enough chaos going on everywhere that I thought I needed to wait it out. It wasn’t until he started firing again in the bar that I was like, ‘Oh shit. Shit is still going down. You don’t stop right now, idiot. Keep going. Get out of range. You are definitely not safe where you are.’”

Alan made it outside then waited amid a cluster of people along the sidewalk. Cop cars scattered the street. He heard a burst of gunfire. “I knew exactly what was happening,” said Alan. “In that moment, the entire series of circumstances changed into a simple narrative. For that, my heart kind of broke. James was reduced to a stereotype. He was the young black angry male. He was blown away by police.”

“The police’s reaction, just the sheer willful violence of it, was almost more traumatic to me than the confrontation between James and Whitney. Not that I wish that kind of violence on her, or on anyone — whether she was guilty or not guilty of bad parenting, or bad housekeeping, or not respecting someone’s property, or whatever it was. But the way he responded shows he had much larger issues than just his house being broken into. He obviously needed help. That’s what made the gunfire from the cops seemed so reactionary and so immediate and so harsh. It was like, ‘This is how the state treats people who don’t know how to deal with their problems.’ No one deserves that. Death wish or not,” said Alan.

Back to the night of the shooting. A few hours later, after Alan gave his statement at the police station, he returned home. “I was up pretty late that night. It got me really thinking about who I needed to reach out to the most. I wrote a long-winded email to the Love of my Life. I’d been feeling a sense of urgency and wanted to communicate that. I needed to remind myself I was an emotional human being. I wanted to feel the compassion I once shared with her. At certain times, it’s alright to break the boundaries you’ve set with someone like an ex-girlfriend. It definitely felt like that situation qualified as appropriate,” said Alan. Initially, the message missed its mark. “She had kind of a strange response to it. I don’t know that the honesty of that moment really went a long way. Maybe it was an ill-advised email to send at 3 in the morning.”2

1 She never showed that night, but later on they reconnected and dated briefly.

2 Time passed and more time passed, and then one day the ex-girlfriend reached out to Alan to talk about a scary and important thing she’d recently gone through, and it went fine.