American Decline and the People’s Republic of Basketball 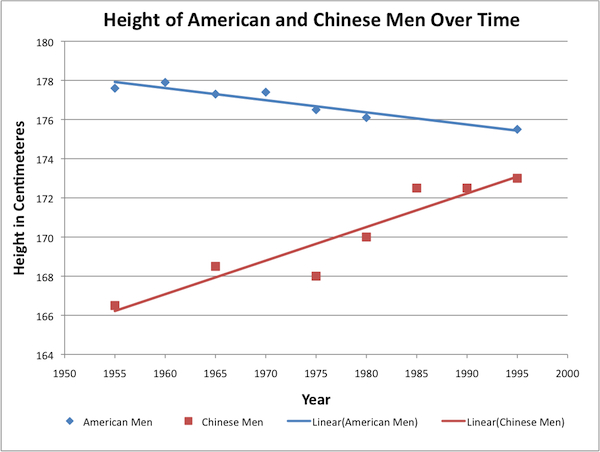 Forget manufacturing–Americans don’t want those jobs anyway. The real risk of China’s relentless climb to attain the world’s largest GDP lies not in the low-wage manufacturing jobs it gobbles up from the United States, but rather in the havoc it will wreak on America’s most bankable export–professional basketball.

Studies in anthropometric history have shown and recent trends have confirmed that as a country’s GDP grows, so does the physical height of its citizens. And as games on NBA on TNT and WGN have demonstrated, tall men are generally the population’s most capable basketball players. It therefore doesn’t take Phil Jackson to figure out that China will soon become the training ground for the NBA’s future elites.

As an American, I can’t help but feel a sense of loss over the United States relinquishing its seat upon the throne of basketball. The eventual decline is especially painful because basketball is the most American American sport. It is, in fact, more American than baseball which, despite the “America’s pastime” moniker, has its roots in the United Kingdom’s cricket and rounders. Basketball’s roots, however, are firmly entwined in the United States of America: the sport was invented in 1891 by Dr. James Naismith in Springfield, Massachusetts and grew in popularity so quickly it became an Olympic sport by 1936.

The sport’s success has fostered improved international competition. Unlike baseball and American football, basketball has reached a high level of global popularity, and professional leagues have subsequently sprung up in virtually every region of the world. The United States has only been able to maintain its basketball dominance due to its head start and the relatively large size of its population–large in both sheer numbers and in physical stature. This combination of history, numbers, and size has forged a hitherto impenetrable firewall between America and its competition.

But it can’t last.

It is no secret that developing countries like China will soon graduate to the status of developed. As the standard of living of China’s one-billion-plus citizens increases to something comparable to what average American citizens experience, so too will the average height of China’s population. Soon, for every engineer, scientist, and professional athlete America produces, China will produce three taller ones. Being that greatness is often a matter of superior numbers, those of us in the United States should not be surprised to find ourselves literally looking up to the Chinese in practically every field. Basketball is no exception.

Of course, the deniers will question the argument that a surging Chinese GDP could endanger America’s position of basketball supremacy. To them, it seems ludicrous to ponder a post-American basketball world. But consider this: since the 1950s, the height of urban Chinese men has trended steadily upwards while the height of American men has declined. Extrapolating these trends forward, by 2020 the average man from Beijing will be 3.6 centimeters taller than the average man from Boston.

As more Chinese players of Yao Ming’s stature and talent fill NBA rosters, America will have to consider tough policy actions. Tariffs on foreign players is the obvious short-term solution to make sure Americans get precious playing time, but such policies will surely guarantee the NBA will be unable to retain the world’s best players. And without the world’s best players, the NBA will commence its sad march towards mediocrity. Even if the league could somehow remain relevant, alienating Chinese fans won’t do any favors for the NBA’s bottom line considering the People’s Republic contains its largest international audience.

There is truly but one logical action for America to take: re-invest in its basketball infrastructure. Already, American colleges lay claim the best almost-amateur basketball players in the world. Yet, very few of these athletes will have the opportunity to play professionally. This sorry fact has likely kept thousands of tall and talented individuals from seriously picking up a basketball. Instead, many of our nation’s tallest have focused on more lucrative endeavors such as nursing, finance, and engineering. We need to therefore better incentivize playing the sport at a high-level. One idea is to increase the number of semi-professional leagues around the country. Another is to provide basketball training for unemployed or underemployed people taller than 6’6". Of course, it goes without saying that basketball must be more highly emphasized in our schools.

If we can achieve these broad basketball initiatives, the United States will be able to maintain its competitive edge on the hardwood for the foreseeable future. However, if we decide to ignore these issues, not only will the televisions we watch be manufactured in China, but it won’t be long until the basketball we’re watching on them is played in China too.