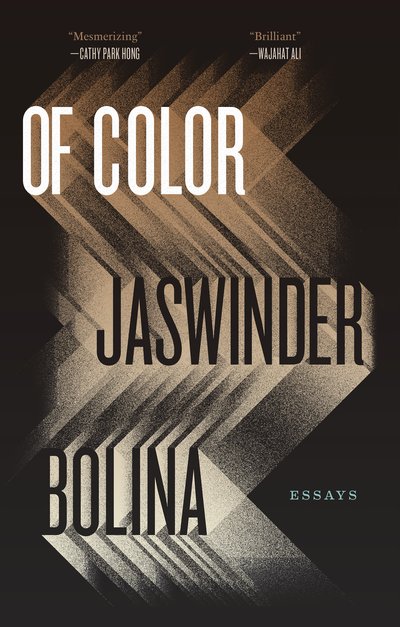 Jaswinder Bolina is the author of Of Color (June 30, 2020, McSweeney’s). Wajahat Ali says it’s an “insightful, raw, and honest collection of brilliant essays illuminating the joys and pains of being a specific person of color. Through his unique lens we also come to understand the universal ongoing story of America.” This interview originally appeared in issue #31 of the Chicago Quarterly Review.

AMANDA UHLE: Jaswinder, your book is coming out during an astoundingly bizarre time in history. First — how have you been during the strange times of the COVID-19 pandemic? I’m also interested in your observations lately about the extreme disparities that this crisis has laid bare.

JASWINDER BOLINA: I keep trying to answer the latter part of your question, but I keep finding myself unable to get all my thoughts together tightly enough for an interview. I think it’d take an essay at least or probably a book to answer. So, I’ll just say that I think we read essays to learn what one person’s life can tell us about the society that person comes from, but you might learn more about a society and its moment by studying the death of just one person in it. I read today that African Americans make up 80% of all hospitalizations in Georgia, this while the white Governor rushes to open the state for business just a few short weeks after shutting it all down far too late. We’re not suffering equally, and we’re not dying equally, not in equal numbers and not in equal circumstances. The coronavirus is a global threat for sure, but its universality only reveals how uneven the terrain of that globe really is. Whatever that old poem says, death isn’t the great equalizer. It never has been. How you die, when you die, where you die all tell us a lot about who you were, but just as clearly, those details tell us a lot about the culture, the time, and the place you lived in, how they shaped you, how they mistreated you, how they brought you to that moment.

Beyond that much bigger picture, our doctor thinks my wife, son, and I all had the virus in early March. We couldn’t get tested because we weren’t sick enough to qualify for whatever limited testing was even around then, but our symptoms lined up with a lot of what we’ve been reading ever since. We’re mostly better now and hopeful that we had it and have some measure of immunity against it, but we don’t really know anything for certain. So, we’ve been staying home the same as so many other people, feeling anxious, horrified, happy to be together, often busy, occasionally bored, and sometimes guilty for our relative comfort and safety. We chase the toddler, FaceTime with the grandparents, struggle to find time to work, and otherwise talk and eat and watch House Hunters International to see all the places we can’t visit. I also have a couple of regular, low-stakes poker games going with friends scattered across the country via Zoom, which is its own small, tech-meets-moment miracle.

AU: In “Writing Like a White Guy” you say, “The thing I least believe about race in America is that we can disregard it.” Do you have an opinion about why that’s been a working strategy for so many for so long — that we can ignore race and hope things improve?

JB: It’s because we think we’re special. American exceptionalism requires us to be the hero of every story we tell, and too many people are duped by this absurd notion that just because the democratic premise of this country is an exceptional one, we’ve successfully achieved its every idealistic end. We haven’t come close, but it’s a lot easier to ignore what’s wrong with us than it is to correct any of it. At end, it isn’t really a working strategy at all, and the only proof we need for its failure is that we keep electing racists to public office and putting them on TV and promoting them into corporate executive offices. When you combine a national narrative of exceptionalism with the self-righteous self-obsessions of American egotism, you wind up with a people not only unwilling but essentially unable to confront their own failings.

AU: You’re perhaps best known as a poet, and in Of Color you’ve given readers an entire book of prose. It’s as sharply-written and tender as any of your poems, which also includes some nuts-and-bolts reporting of your daily life: the shows you watch, the inside jokes with your wife. Can you talk about how you approached these essays, as opposed to how you might approach writing poems. How was it different?

JB: The funny thing is I didn’t mean to write the essays, and that might be the most important distinction I can make. I’ve been trying to be a poet for most of my adult life, but I more or less stumbled into essay writing. I was trying to work out a problem on paper and that turned into “Writing Like a White Guy.” I sent it to a friend who was interning at the Poetry Foundation, and it got moved up the editorial chain until they eventually published it. I had no idea the response that essay would receive, but it led to invitations to write other essays for other venues, and it also gave me some confidence to work out other problems in writing too. And, here we are!

All that aside, I can say more substantively that my poems tend to be interested in having an effect where my essays are interested in interrogating causes. The distinction I’m making here isn’t as tidy as that sentence might make it sound, but it’s the cleanest one I can offer. I’m hoping my poems will elicit some experience of empathy or recognition or discomfort in a reader, but my poetic speakers tend to be personas, either adjacent to my actual self or a little removed or completely contradictory to who I am. I’m constantly making stuff up because the poem just needed some word or image there in order to achieve its desired effect. But where good and honest poetry can deploy figurative language and invented image to play on a reader’s feelings, good and honest essays shouldn’t.

As to examining causes, there’s nothing that brings on writer’s block more swiftly or more brutally for me than when I have an argument to make and I’m simply seeking to map out that argument. Things tend to go better when the act of writing is a full-contact process, one that clarifies or even reveals what I believe about a subject. Like I said earlier, I’m working out a problem on paper. In this, the essay becomes an opportunity for me to probe what I think I believe at the outset, to test myself for hypocrisy and contradiction, for complicity or complacency, to understand the causes for my beliefs, whether about interracial marriage, the pressures of assimilation, or the political implications of being a writer and person of color.

AU: You spend some time in the book examining the world of writing and publishing as a lens for understanding immigration, assimilation, and racism. I’d love to know more about how you came to weave those threads together.

JB: The essential task of any kind of writing, poetry or prose, fiction or not, is that it describe something. If that sounds stupidly simplistic, I just need to remember that famous directive from the intro to creative writing class in college: “show don’t tell.” Writers are trained to document concrete and specific details of whatever it is they’re considering and work outward from that foundation. It turns out that’s pretty good advice when you’re taking on big cultural and sociological ideas like immigration, assimilation, and racism. It’s almost impossible to write about these without some kind of context, and that context for me, in part, is my life in writing. So, I started out describing what I’ve noticed while living that life. I’ll be honest that I remain pretty astonished at how much that alone told me about the larger sociopolitical world beyond, but it felt natural to weave it all together because I was simply describing what I was seeing. The stories I was telling were true.

AU: Writing essays — somewhat like reading them — is another way of thinking through problems that nag at us. Since writing these essays, in some cases many months or more than a year ago, do you feel like the dilemmas you were exploring have been resolved for you?

JB: The essays in the book were written over the course of nine years, so I suppose there’s been plenty of time to find some resolution, but no. I definitely have not resolved much of it. These are the kinds of subjects — race, class, language, family — that I don’t think we ever resolve. You just kind of pick a resting spot and take your stand there for awhile until you realize you got something wrong and need to reconsider your position. The book covers a lot of ground, and it took a long time to write, so I’m thinking of it as a good spot to take a rest. Later, whether a year from now or a decade from now, I’m sure I’ll pick up and take much of this on again. Just not right now. I think that’s the best resolution I’m likely to get.