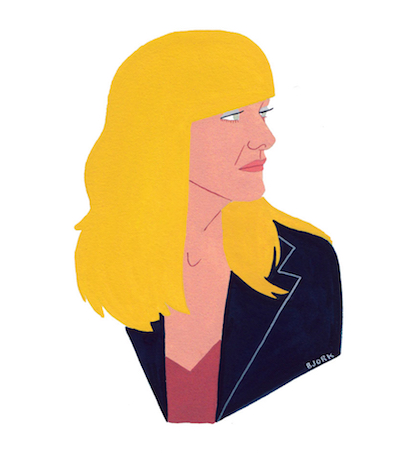 Christie wears a majorette’s jacket with gold-braided epaulets when we meet. Her hair is smooth and blond, her clothes are black and stylish, and her manner is chatty and feminine. Before this, I’d seen her around with her boyfriend Raven, whom she refers to as her husband, though they were never officially married. Today they are no longer together, she tells me repeatedly. She says she’s a forensic accountant. “I’d do the paperwork for stuff like the Enron scandal,” she said, and we go over her other basics. Christie hasn’t undergone formal disaster training, but she grew up having to help her parents study for their yearly exams. “My mom was the first flight attendant hired at Alaska Airlines,” said Christie. “My family calls her the Bionic Woman. She had to have some surgeries. Her hands are metal. So are her knees and shoulders. Her fingers will be next, and her toes. The turbulence makes your joints give out a lot faster,” she said. “My dad was a lieutenant in the fire department for 45 years. He carried a gun. I don’t like guns, but that’s how it was. He told me to always know my exits and count the people in the clubs. He’s seen some bad stuff — crazy fires in bars, and bottlenecks, and people getting burned alive,” she said.

Christie and I talk over dinner, and I’ve brought her police statement, which she’d given only a couple hours after the shooting. It happened a couple years ago now, so it’s good to have a template. We eat salads, and as I read aloud, I ask Christie to fill in details. As her story begins, she’d arrived at the Twilight with Raven for Sunday-night karaoke. They sat at a table in the dining area with a couple friends. When the gun sounded, “people started screaming. I thought it was coming from the transients that hang out in front of the building, and maybe something happened to one of them. At first I was gonna go help whoever got shot. I could handle whatever that was, whether it was CPR or a tourniquet or whatever needed to happen. I was mid-launch to go run out there. Then I saw the man enter. He was carrying a gun,” she said.

In Christie’s statement, she’d described James to police as a height-weight proportionate Caucasian with some “color to his skin” and blond or sandy-brown hair. He was wearing baggy blue jeans with a light wash and a cream-colored thermal shirt, and “he had his arm extended as if to open fire,” she said.

“I should’ve grabbed his gun. I should’ve stood in his way. Maybe he wouldn’t have died,” she said to me, looking back, and then continued. “I told my friends to get down on the floor. I flipped the tables for coverage and my husband wrestled me down, so I’d get on the floor. Then I wrestled him back down so he’d get on the floor. All I was worried about was protecting Raven. Raven always had to be dominant, and he’s not. I just knew he wouldn’t have been able to handle himself in the situation. I thought James was going to shoot everybody in the bar. I was sure we were gonna die. I thought maybe the bullet would go through me, and Raven would stay alive. I didn’t want him to die. That was more important.”

As James crossed the room, Christie said, “he looked down at me. We had a moment. We’d locked eyes and he raised the gun in a way that meant, ‘Stay away.’” James disappeared into the lounge, then Christie sprang up and raced to an emergency exit door she’d spotted in the corner of the dining room. Christie thinks it might’ve been locked, but “my dad had taught me how to kick exit doors open. You have to kick the bar directly. There’s some weird mechanism I guess they put in the doors, for that reason,” she said. When it swung open, “I bolted. I was the first one out. It felt like I was running for my life. I remember telling myself, ‘Just keep running when you get shot in your back.’ Some people followed me once they saw me leave. We didn’t know how many shooters were after us.”

After she got outside, Christie sprinted around, issuing commands. “I was screaming to call 911. I instructed the people that were straggling, telling them where to go and where to hide. I shoved a bunch of people into the supermarket next door. I remember I felt so bad for the guy in the wheelchair. He was just rolling around, probably in a drunken stupor, not knowing what happened. I ran to a neighbor’s house. It was a little yellow house, or gold. An ugly ‘70s color. The neighbors never came out. I think they were in bed. No one would answer the door. It was Sunday night. In hindsight, though, would you? I wouldn’t! Look at this neighborhood.”

Christie heard another gunshot from inside the building. “At that point I thought my friend Amy was dead. I thought he’d done it. I remember hearing her scream. I recognized her voice. But later I found her. She was hiding under my jeep. I had to get her out from under it. She was traumatized. She had no ability to talk. She wouldn’t respond to me.”

As Christie made her way back to the market, she encountered Raven on the street. He was demanding that James exit the bar and fight Raven in person. “I heard my insane husband yelling, across the way. Just yelling and yelling. I told him to get the f down. He told me to get the f down. He was nuts. He was so fucking nuts. I thought it meant there were more shooters, but it was all him. It was all so weird. He made the whole thing about him,” she said.

When Christie returned to the store, more witnesses had gathered inside. “I thought bullets were gonna come through the walls. I told everyone to get down and stay away from the walls, but they all looked at me like I was on crack. I asked the owner if he had a shotgun or a baseball bat or anything. I had full intent on killing someone. I was going to try to stop whatever was going on. Had the store guy had something I could’ve used, I would’ve gone back into the bar. But he didn’t. So I left and went straight up the street until I found the cops. I ran as fast as I could towards the sirens, waving the police down. I was met head-on by an officer.”

Christie’s statement reveals what she told the police. “I said they needed to take the perpetrator out immediately, that this was Columbine. I knew he had a Glock, and he was already killing people. I told them again what he was wearing. They ran after him and opened fire and did not leave him alive. They told me they were really happy the description was so clear, so they could take him out right away.” As Christie and I revisit this exchange, she grows somber. “It’s kinda my fault James got killed. Because I knew the cops, and I ran to meet them." Christie had previously met the cops through her dad, she said. "I gave them precise details, like my father trained me to do. I told them to shoot on sight, and they did,” she said. I mention the police collected descriptions from several witnesses, not just Christie, before they moved into the building. And they claim to have fired at James only after he shot at them first. Even still, Christie firmly accepts full blame. “They were my friends, so they trusted my opinion. I can’t forgive myself. Having a man shot is not my idea of something I would’ve ever done,” she said.

Christie asks me what happened to James’s girlfriend Whitney after he shot her. “From the case files, it looks like she was hit in each leg, above the knee. I don’t know how serious the wounds were, but they were non-fatal,” I said.

“Darn,” said Christie. I wait for her to continue. “People should consider who they’re having their children with. That’s all I have to say. And Child Protective Services needs to be way more active, because this isn’t the first time this happened at the bar with that couple,” she said.

This subject has come up with other witnesses, to a differing response. A lengthy background in social work shaped Ryder’s view: “If there were multiple interactions between this couple and the police, that only proves the police methods aren’t effective in the long term. We don’t have a society that supports people talking about their own interpersonal violence, and we don’t have a network beyond the domestic-violence shelters that are only accessible to people once they’ve gotten to a certain point. We need to change our dialogue, develop trust, and shift conditions in people’s lives,” said Ryder.

Back to Christie. I tell her I haven’t talked to Whitney yet, but I’ve found a couple of her mug shots. One involves a recent DUI in Idaho. “I guess I’d drink myself silly too if I had my boyfriend killed and his dog killed,” Christie said, though to me it’s unclear if the latter is really what happened. James’s motive to shoot Whitney wasn’t covered extensively in court, but multiple witnesses heard James announcing his dog had been killed by someone, and he seemed to believe Whitney was responsible. The case files contained pictures of James’s apartment taken the night of the shooting, but nothing in any photographs suggested a dog had recently died. Not in James’s home, at least. I’ve contacted a friend of James and a relative of James, but neither responded to my request for an interview.

“It’s crazy how much the shooter reminds me of me,” said Christie as we finish up. “All I can think is, he was a Virgo like I am. His birthday is four days after mine. We both had pit bulls. My pit bull Ocean is dead, so I understand James’s plight. I love my dog just like James loved his. If you lose your dog, you kind of have no reason to live. And having a crazy partner. When your ex is mad and deranged and making your life a living hell, it’s just darkness in your soul. The poor guy. I’m not ashamed. If I’d known about the dog and what was going on with this awful girlfriend he had, I would have helped him,” she said.