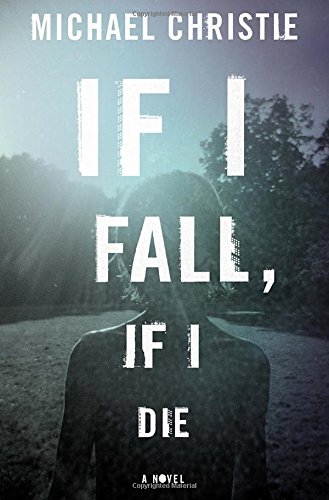 If I Fall, If I Die is a richly plotted debut novel rife with vivid characters ranging from Diane Cardiel, an agoraphobic artist entombed in a house that makes Grey Gardens appear well tended, “The Butler” a notorious bootlegger presiding over a pack of trained wolves, and preteen protagonist Will Cardiel, Diane’s son increasingly caught between suffocating domesticity and Thunder Bay’s criminal underworld. (The declining Canadian coastal city makes for an atmospheric setting.)

But fear not! Some of If I Fall, If I Die’s most soaring passages are devoted to skateboarding—nothing less than Will’s salvation. Indeed, skating does for son what behavioral science fails to do for mother: set him free.

This is precisely Michael Christie’s—a rising Canadian literary star whose own mother suffered from agoraphobia and to whom the book is dedicated—sly point. Skateboarding—a children’s toy for crying out loud!—is often more therapeutic than any therapy. Perhaps this is because stillness rarely if ever begets serenity. Or, as Will laments of a mother stuck in a mental prison, “He wondered if she had any idea what she’d given up, what she’d wasted all these years Inside, would waste.”

Not coincidentally, Mr. Christie is an accomplished skater. (He’s been sponsored by the venerable company Chocolate.) We recently asked him to elucidate how and why the useless wooden toy prepared him for the literary life.

RICE: Mike, congratulations on the publication of your novel. Reading it was an absolute thrill. So you’ve woven skateboarding throughout If I Fall, If I Die. You’ve even gone so far as to name the protagonist “Will Cardiel,” in homage to the legendary skater John Cardiel. Were there any runner’s up? And did you ever consider referencing skateboarding with both first and last name I.E. naming a protagonist “Mark Koston,” “Guy Gonzalez” or “Gino Hensley” in homage to other canonical skateboarders?

CHRISTIE: This might sound strange, but when I’m writing fiction, I always dread naming characters. It’s my least favorite step. In drafts I call them “P” or “H”, or some other procrastinator stand-in. And it’s funny that when I’m finally forced to do it, my mind instantly commences running through the thousands of skateboarders I’ve followed over the years. In a way, skateboarding is like my imagination’s Rolodex. So yeah, Will and Diane are indeed named after the indomitable AntiHero rider John Cardiel. For a time I did consider Mariano as a surname (who was my favorite skater growing up) and a few others, but, especially after his accident and miraculous recovery, Cardiel just seemed perfect. He’s always embodied the charging excitement that is the lifeblood of skateboarding, which seemed to speak to Will’s character especially. Also, Cardiel sounds a bit like Knievel, and it also sounds like “cardiac”⎯heart-related, which is apropos, if you’ve read the book.

RICE: As you know writing about skateboarding can be a challenge; some would say a virtually impossible, scarring, lacerating, ill-fated, apocalyptic, broadly terrible, traumatizing pursuit which can result in catastrophic emotional injury, feelings of helplessness/hopeless, pain equal to or exceeding organ failure, nausea and just general annoyance. Perhaps what makes it so challenging is this: Skating feels so good one has the urge to rhapsodize and yet its technical vocabulary is unwieldy and opaque to most readers. Nonetheless, you did a beautiful job of depicting it in If I Fall, If I Die. How long did it take to render it in an authentic, yet legible fashion?

CHRISTIE: For years I was convinced that skateboarding couldn’t be represented in any art in a way that both remained true to the act itself while at the same time making it interesting for the non-skateboarder public. This is especially true for writing. I.E. “That morning, Will and Jonah waxed a ledge by the old gas station and Will learned switchstance frontside tailslides and had almost almost learned to shove-it out when his kingpin broke.” How’s that grab you, general reader? Not so much? So yeah, real skateboarding is all jargon and insider talk, but I knew that if I could capture that moment when Will first started skating, and already have the reader on his side, emotionally, they’d be willing to sit through (and even learn!) some of the more basic technical language, because they’d be invested enough. This book had two main editors—Zack Wagman and Antia Chong, people of fierce intelligence and editorial skill, and I must say it was really fun to describe to them what a kickflip was.

RICE: You dedicated the book to your mother. She had agoraphobia. One of the main characters—Diane Cardiel—is so agoraphobic as to be completely housebound. Would you have fallen prey to this kind of life had you not found skating?

CHRISTIE: Yeah, my mom, who died in 2008, was agoraphobic while I was growing up. Her illness was much more complex and not so stylized as Diane’s is portrayed in the book. But like Diane, my mom had crippling panic attacks and was housebound for long periods, and there are many details in the novel that are drawn directly from our life inside our house together. Looking back to when I started skateboarding at 11, I realize now that it was my first wild grasp at true independence. I think I gravitated to skate culture because it was something my mother had no understanding of. It was entirely outside the realm of adults: no coaches, no teams, no registration fees. It took place out there, in the world. She’d always wanted me to be an artist or a scientist of some kind, so skateboarding totally freaked her out. But she learned to appreciate it as time went on. While skateboarding expanded my worldview and made me more independent, I’ve still retained some strong reclusive tendencies that I attribute to her. This craving for isolation that we shared is probably the reason I’m a fiction writer. But don’t worry, I love being out in the world too much to ever be in serious danger of becoming agoraphobic myself.

RICE: I’ve struggled with depression and anxiety, though these words are inadequate. I’m tempted to say skateboarding is the only known “cure,” were that not a disservice to friends and family. Something about skateboarding offers unity to a fractured psyche. Why does skateboarding have this power to heal, when all else fails? You have a lovely passage in If I Fall, If I Die in which you write “[S]skateboarding was a contagion a certain species of kid was susceptible to.” Why is this? And is it still true?

CHRISTIE: As much as I’m reluctant to perpetuate the false myth that skateboarding is some kind of cover for delinquent activity, or a refuge for ‘troublemakers’, I really think there is something about skateboarding’s DNA that attracts kids who are damaged in some deep way. I remember once on a skate trip I started asking a bunch of sponsored skaters in a tour van about their families, and it came out that like 9 out of 10 of us in the van had parents who were mentally ill. Addiction, schizophrenia, anxiety, depression. It was seriously uncanny. But it makes sense. Though they aren’t thinking this consciously, it’s as though kids are like: “Alright, if you won’t or can’t take care of me, I’m just going to go out and find some friends and find something to do, and I’m going to challenge myself and get this incredible feeling of belonging and mastery that I’m not getting at home.” I think the beneficial effects of skateboarding on the young person’s mental health are because it builds this autonomy that you just don’t get when you join a team and a coach is telling you what to eat and where to go and how to move all the time. As I said before, skateboarding is at its very essence a creative adaptation to the bleak urban spaces of the world. Empty Californian pools, suburban mini-malls, shuttered schools, corporate architecture, decaying industry, urban plazas frequented by the homeless and the insane⎯who else is using these spaces creatively except for skateboarders? It’s the same on a mental level, too. Skateboarders take what is perhaps a bleak psychological space and make it a connected and creative one. What could be more inspiring than that?