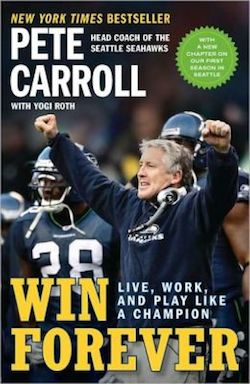 Under Review:
Win Forever: Live, Work,
and Play like a Champion
by Pete Carroll with Yogi Roth
(231 pages, 2011, Portfolio/Penguin)

Among the many thrills and spills of weekly NFL action, dedicated fans will be familiar—albeit definitely not comfortable—with the signature “game faces” of long-time coaches. Win or lose, every fall Sunday these men obsessively pace alongside the field of play, never coming to a complete stop at any point during the four-hour game, perpetually scoping a new hapless rookie, referee, or hourly groundskeeping employee to verbally incinerate for improper fundamentals.

There is the ruddy-cheeked rictus of the New York Giants’ Tom Coughlin, an expression that combines the same withering angst and underlying frantic anxiety of an intensely constipated person, witnessed tentatively breaking into something that approximates a smile only in the short minutes immediately following a Giants Super Bowl victory. There are the bellowing, gastric obscenities of the Ryan twins (Rex of the New York Jets and Rob of the New Orleans Saints), a double-whammy of jowly lip-flapping that, in HD, practically allows the viewer to smell the powerful hints of onion rings and Cool Ranch Doritos that waft through the facemasks of your favorite players after that latest blown coverage. Jim Harbaugh of the San Francisco 49ers engages in such a demanding and balletic routine of clipboard-tossing and headset-flinging that the viewer watches in rapt suspense to see if the astronomical blood pressure will propel an artery to burst clear out of his neck, showering the line judge in Niner red.

So if I were an NFL player, there’s no doubt which coach I would want to play for, the rare coach who possesses none of the above rage-filled tics: Pete Carroll of the Seattle Seahawks. Always in crisp khakis and clean white tennis shoes, Carroll commands his piece of sideline real estate with the same optimistic pep and verve of a motivational speaker working a hotel conference room stage. If the Seahawks have blown out their opponent, the waning minutes of the fourth quarter will find Pete indiscriminately dishing out hugs—real, two-armed, genuine embraces—to whichever player or coach is nearest to him. Unless you left your Super Bowl party early a couple weeks ago—which, since the score was 22-0 at halftime and 43-8 in the end, you just might have done that—you and a hundred-million other Americans saw Pete distributing these very hugs while Seahawk-blue and -green confetti rained down upon him, Seattle crowned the NFL’s newest champions.

This month was probably the first time you had a conversation with your friends and/or co-workers about Petey, the world’s most zestful and vivacious 62-year-old. But ho, not I: the trajectory of my life has (inadvertently) followed Pete’s since the turn of the century. A resident of Southern California for the entirety of Pete’s dominating turn (2001-09) as the head coach of the USC Trojans, I moved to Seattle about the same time Pete did, this being his fourth season directing the Seahawks. Not only has he been vanquishing another opponent each weekend on my television set, I’ve also been able to count on hearing breathless sightings of the ever-social and extroverted Carroll: “He was at the high school down the street, scouting a potential recruit!” Or, “He walked right by our friend-of-a-friend at the Macklemore concert!” Through so many degrees of separation, Carroll has been filling my social circles with electricity and excitement each fall (not to mention keeping local car-flag distributors employed) as long as I’ve been conscious of football.

Carroll’s career has not always been so thrilling to follow. Continuously working as a football coach since the early seventies, Carroll was either an anonymous assistant—coaching up fringe players in distant locales like North Carolina State, University of Arkansas, for the Minnesota Vikings—or he was getting fired very quickly after getting hired as an NFL head coach, spending a total of four seasons in charge of the Jets and New England Patriots. The atmospheric success with the Trojans and Seahawks has been sudden and unexpected, yes, but anything other than coincidental: between his jobs with the Patriots and Trojans, Pete experienced a career-defining bolt of purposeful enlightenment when reading the works of the Grand Poobah of self-help books by professional athletes, John Wooden. The lasting results from that moment of transcendental inspiration include: the Win Forever Pyramid, today’s Win Forever book, and confetti showers as victorious national champion of both the college and professional leagues.

Fortunately for me, the heavy and oft-times existential unraveling of the foundational syntax that supports Pete’s motivational system has already been given serious scholarly consideration. Damon Agnos’ A Competitor’s Guide to Existence, hot off the e-presses, plumbs the cavernous depths of The Win Forever Pyramid’s maxims until the book and its readers emerge out the other side of the earth, changed and bettered by their shared journey.

Among the most important contributions to the Carroll scholarship that A Competitor’s Guide to Existence makes is its full illumination of the parallels, sowed by Carroll, between the Win Forever Pyramid and Maslow’s also-triangular Hierarchy of Needs. Namely: in the Carrollian view, “competing” and “existing as a human” share an essential symbiosis. Consider Agnos’ interpretation of the boldfaced Pyramid focal point “Practice is Everything”:

…[I]f practice is everything, then anything that is not practice is not something. To be more direct, not-practice is nothing. Therefore, either the games don’t exist, or the games are practice. […] Then again, we may see many things that appear not to be practice, but if we are not competing, who’s to say that we exist? Life is but a dream, boat-rowers.

Potential disciples of Carroll will be thrilled to know that—much like Carroll’s own practice of putting a plastic snake in a Gatorade cooler in the practice facility, filming his players’ terrified reactions, and then posting the footage on YouTube—Winning Forever is not all philosophical hair-splitting. It can be a journey filled with humor, and jokes! Take the cue from these clever quips of Agnos’ construction:

Why did the chicken cross the road?
To compete.

Why did the chicken cross so many roads?
It was in relentless pursuit of a competitive edge.

After careful consideration of other prominent declarative statements elsewhere on the Pyramid (“It’s All About the Ball,” “Everything Counts,” “Respect Everyone”), Agnos successfully illustrates that full absorption of Carroll’s pithy directives requires the grammatical equivalent of a surgeon’s scalpel:

These uncompromising conclusions may leave readers without firm emotional anchoring unpleasantly adrift: “You mean to say,” such readers may be wondering at this juncture, “that these career-revitalizing, Super-Bowl-winning, metropolis-energizing motivational techniques reduce to a pile of circular syntactical rubble?”

Um, well—without even getting into Agnos’ prescient discussion on the linguistic construction of the phrase “Win Forever” and its problematic relationship to Cantor’s theory of multiple infinities—yes.

It is Carroll himself, addressing the camera in a YouTube video on the WinForever channel entitled “Nike WinForever Workshop LA 2011,” who shifts the paradigm of this scholarly discussion by positing that being nonsensical does not necessarily mean being non-useful. In his words: “It’s never been about the words that I say but it’s about the energy that I bring when I’m speaking [and also, the reader is safe to extrapolate, when he’s writing].”

Or: circular reasoning and linguistic directionlessness are inconsequential to the 21st-century football coach so long as their message has been couched within the desired vibe.

Please join with me in bemoaning the sad state of football-coach motivational-speak. The reality is that books by football coaches take up a disproportionate chunk of the self-help books by professional athletes market. (Football coaches produce so many books I’ll even pat myself on the back and say it’s something of a feat that I went half a dozen reviews before succumbing and examining the works of a football coach.) And yet all that’s required to topple all the other football-coach books and beat their authors from the opposing sideline is an attitude that treats players with actual human-to-human respect instead of raining spittle down on them during hot summer two-a-days.

Win Forever takes significant inspiration from Timothy Gallwey’s The Inner Game of Tennis, a wise book that deserves to be shelved in the “Buddhism” section as much or more than it belongs to “Sports.” By stepping outside of the pre-approved football-coach library Carroll is already something of a revolutionary. By actually taking Gallwey’s message to heart and deciding to produce a team environment focused on providing players with a place where they can be free of distractions or worries and enter “the zone” and thereby fulfill their highest potential—Carroll has more in common with an alien species than some football coaches. You can see the difference in their game faces. You can see it in the total number of hugs distributed. Winning forever may be an impossibility, but it’s easy to root for Pete when, as he so often does, he emerges victorious.