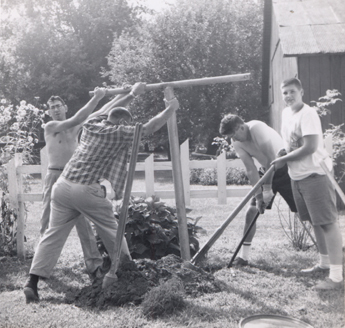 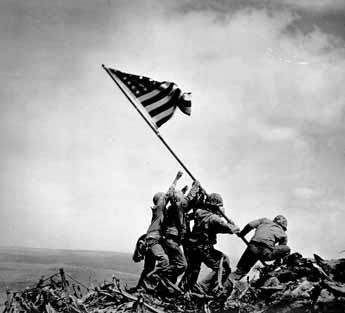 My uncles, who were World War II veterans, are joined by my boom-baby cousin in this shot showing the installation of a clothesline post at my grandma’s house sometime in the ’50s or early ’60s.

I’ve always thought the “rhyme” (to go all Weschlery with my vocabulary) of this photo and the iconic Iwo Jima flag-raising was unmistakable.

From the heroism of war to the postwar domesticism of side-yard chores, it’s a two-photo mid-20th-century history lesson.

P.S. I know I already won once, so you don’t have to send me a book or whatever. I just love this Convergence too much not to send it.

Another winner, this one, from the victor of our very first contest, Charlie Hopper, showing himself once again as adept at finding Convergences among his forebears (albeit somewhat more recent ones this time out) as he is at finding them among his heirs. (And let that be a goad to the rest of you prior winners: we are not done with you; we want more, MORE, MORE!)

Now, in this case, as it happens, the great mid-century American assemblage moralist Ed Kienholz in some ways beat Mr. Hopper to the punch (or, anyway, more or less tied with his war-veteran uncles) with his own version of Suburban Iwo Jima, a truly wrenching 1968 jeremiad he dubbed The Portable War Memorial, a detail from which is shown below (from the cover of a German catalog—that country, ironically, being one that found Kienholz’s angrily grim take on American patriotism particularly to its liking). 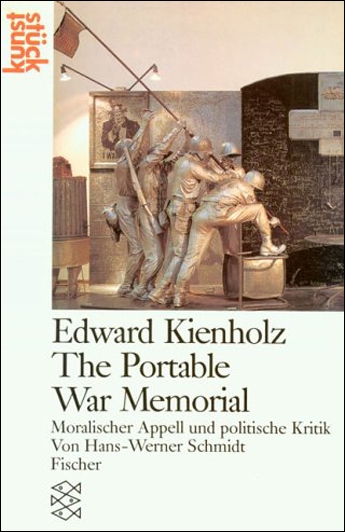 Kienholz’s version, as it happens, is in some ways truer to what actually happened atop Mount Surabachi that now-iconic morning, February 26, 1945, near the outset of the gruesome six-week battle that would come to claim the lives of nearly 7,000 Americans along with almost the entire 22,000-man Japanese garrison defending the strategically crucial island. Kienholz’s flag, at any rate, is much closer in size to that of the actual first flag raised atop the dread volcano, the one deemed not photogenic enough … 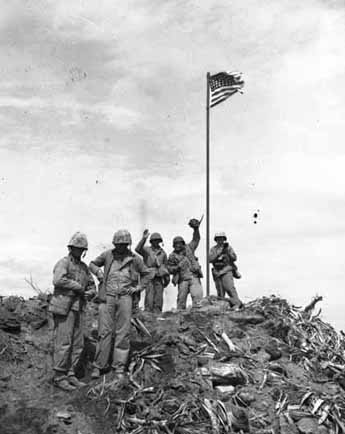 which, in turn, had to be replaced, under heavy fire (there’s even a photo of the one coming down and the other going up) … 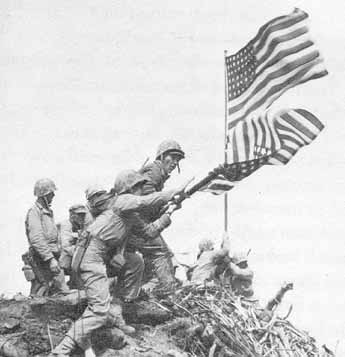 (See Karal Ann Marling and John Wetenhall’s bracingly revisionist 1991 take on the fate of both the photo and those who happened to be captured in it, Iwo Jima: Monuments, Memories, and the American Hero.)

Now, a question arises as to why that specific image, of all the hundreds of thousands shot during the war, proved so uniquely resonant for those millions who immediately prized it back home at the time and for so many of the generations thereafter. And here I think our friend Mr. Hopper, or maybe his uncles, are on to something.

For the entire island-hopping campaign that came to characterize the Pacific War must have come to seem, both to those back home and to the thousands of ravaged, bone-weary Marines who actually undertook it, like so many Stations of the Cross, and that terrible mountain like some species of Calvary.

Whether or not that specific association was in the minds of the five Marines who posed for Rosenthal’s photo, or even in Rosenthal’s own mind as he shaped and snapped it, I can’t help but suspect it was at the back of the minds of the photo editors back home who, all around the country, were drawn to that specific image (out of all the others that were also sent back from that roll) and featured it on their front pages the next day.

For, of course, that pose has a history, from Danish medieval 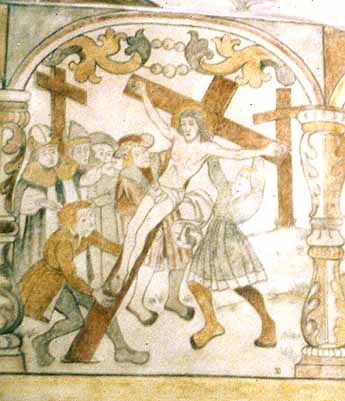 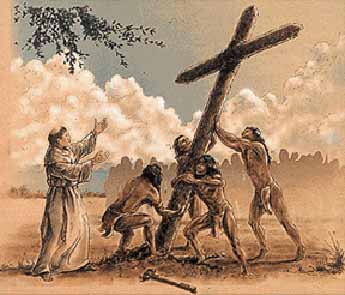 with high points in both Rembrandt 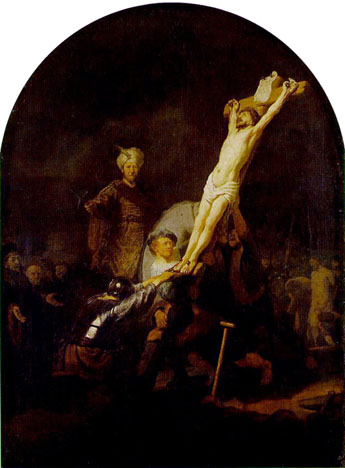 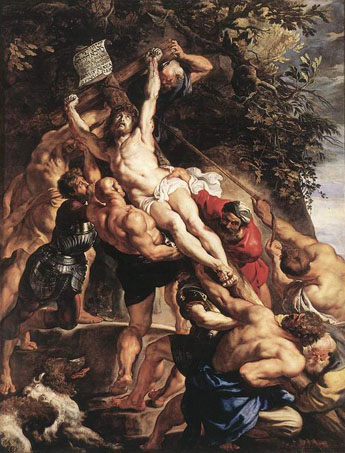 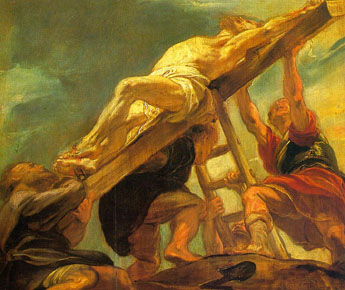 It has continued to occasion a wealth of subsequent associations, sometimes decidedly darker, beyond the Iwo Jiman, such as in this veritably Kienholzian painting by Claude Clark, from 1977 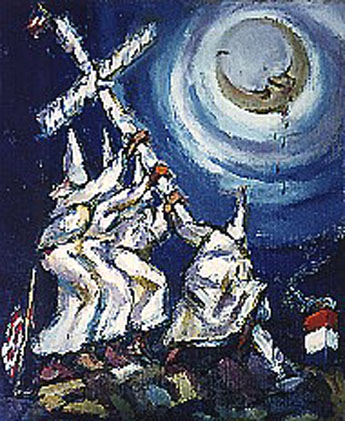