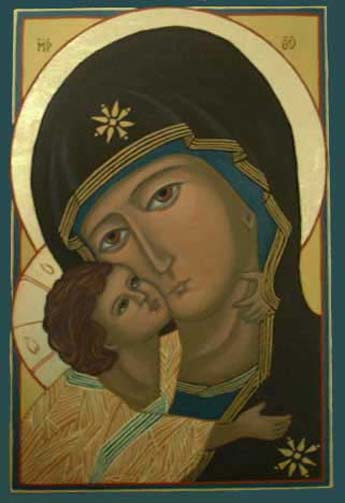 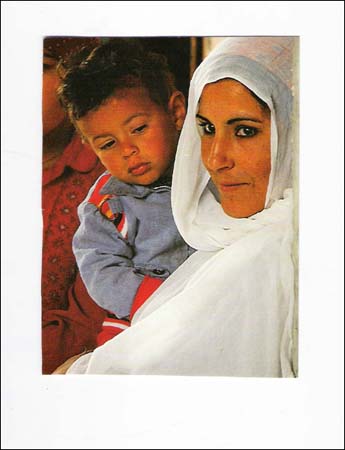 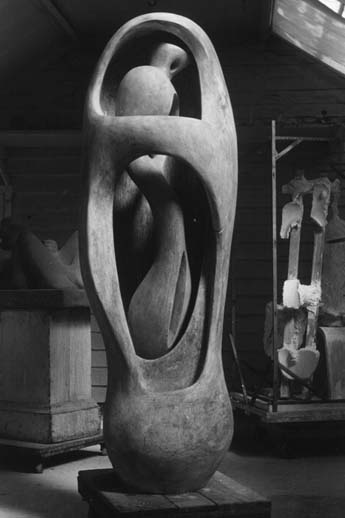 Within a week of moving to Jerusalem, I came upon Figures 1 and 2 in the gift shop of Dormition Abbey, a church dedicated to the eternal sleep of the Blessed Virgin. With what I would have paid for a delicious falafel-and-hummus pita, I bought a postcard of Figure 1, featuring the Virgin of Vladimir, an oft-emulated Russian icon. Figure 2 sat on the bargain rack of poorly cropped photographs of Muslim women, each affixed with a Bible verse. I was struck not only by the poor taste but also by the similarities between these two images. The slightly askance gaze of the mothers, the playmate-possibility of the two sons, alike in age and in their koala-like grips on their mothers. A stumble upon Henry Moore’s Internal and External Forms (Figure 3) a week later completed my triptych, and I Scotch-taped my photo essay onto the inside of my bathroom door.

I started spending a bit more time in the bathroom, urinating and ruminating on women, mothers, the feminine divine. Like the halo and the veil, encircling the faces of women in order to do what? Deify? Oppress? Protect from UVB rays? How similarly they’re represented, and how differently they’re perceived! And Moore’s sculpture—a fetus-filled womb? Or a scarf-shrouded mother cradling her child? I could write a 10-page paper on this stuff. I could fill out a membership application for a New Age feminist commune in New Mexico and they’d make me director. The halo, the veil, the woman, the womb: deification and subjugation in the name of protection for one whose very anatomical nature is to protect. The complexity of it all, and yet the connectedness!

“I don’t get it,” said my friend Will, who looked for two seconds at my nuanced wonderfind before heading to the kitchen for more chili. Weeks later, though, once again on the toilet, it hit me: Of course you don’t get it, Will! You pee standing up! You drain your bladder staring at the white tiles that grid across my bathroom walls, while behind you the hues and curves of femininity and divinity hang in mystery on the bathroom door. Have you ever been overwhelmed by the simultaneous objectification and subjugation of women in this world while your pants were around your ankles? Probably not, Will. Probably not. It all swirls and twists and melds and merges, but you won’t notice this if you’re looking in the toilet while you’re ruminating.

Hmmm, nnn’kay … I think Ms. Christ(!)enson’s points regarding veils and halos and deification and subjugation are all well taken (she might for that matter have thrown in virgins and whores), but what really got me thinking in this instance was that last paragraph of hers about … well, you know.

For starters, I was reminded of David Macaulay’s marvelous Motel of the Mysteries, his beguilingly illustrated account, published in 1979, of how one day several thousand years from now a somewhat dim if boundlessly ambitious young archeologist named Howard Carson will stumble upon a long-buried motel complex and proceed blithely to misconstrue every single thing about it, including what he will take to be the Sacred Urn and the various sacred collars, headbands, pendants, and earrings necessary to its proper devotional deployment … 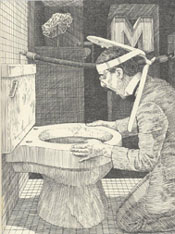 But then, too, I was put in mind (as, come to think of it, Macaulay may well have been as well) of Marcel Duchamp’s notoriously inspired Fountain of 1917, the found ready-made sculpture the ur-Dadaist attempted to enter, pseudonymously (under the name R. Mutt), into that spring’s follow-on exhibition to the Armory Show of a few years earlier, where his Nude Descending a Staircase had caused such a howling (“an explosion in a shingles factory”) critical ruckus. This time, though, the show’s scandalized organizers didn’t even let the piece—after all, simply a urinal set on its side—into the exhibition.

Simply a urinal set on its side, yes, and yet much, much more. “A lovely form has been revealed, freed from its functional purposes,” as Duchamp’s sidekick and collector Walter Arensberg insisted, appealing the board’s decision, “—therefore a man has clearly made an aesthetic contribution.” (An estimation resoundingly reaffirmed, almost a century later, when, in a poll as part of the run-up to the 2004 Turner Prize, over 500 international art experts voted it “the most influential modern art work of all time.”) To no avail, at the time of its inception, however. So Arensberg and Duchamp lugged the forlorn thing over to Alfred Stieglitz’s 291 Gallery (as Rachel Cohen recently related in the 16th chapter of her luminous Chance Meeting braid of interweaving essays), where Stieglitz in turn photographed it in a glow of profound reverence. Carl Van Vechten subsequently enthused to Gertrude Stein, by letter, how “the photographs make it look like anything from a Madonna to a Buddha.”

Or, as I myself always thought, and, interestingly, found myself thinking all over again just recently: a pietà. 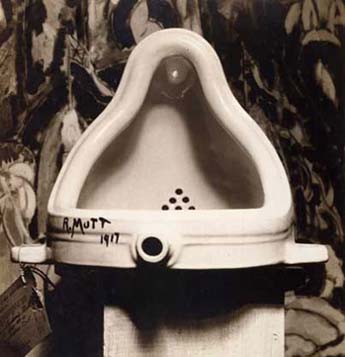 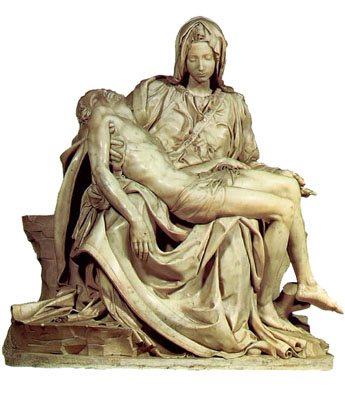 Earlier this year, a 77-year-old “art activist pensioner” named Pierre Pinoncelli from Saint-Rémy-de-Provence (site, as it happens, of Van Gogh’s famous asylum) attacked Duchamp’s icon with a hammer, slightly chipping it, as it lay in state as the centerpiece to the Pompidou Center’s massive Dada retrospective (now just recently transferred to the Museum of Modern Art in New York). Many shocked newspaper readers the next morning (I am sure, at any rate, that I was not alone) were put in mind of that infamous moment, back in May 1972, when a 33-year-old Hungarian-born Australian geologist named Laszlo Toth, ecstatically keening “I am Jesus Christ!,” took a hammer to Michelangelo’s sublime Pietà in the Vatican, causing considerably more damage. While Toth was being almost universally decried as a cultural terrorist, a small band of radicals took to hailing his “gentle hammer” under the distinctly more Dadaist slogan “No more masterpieces!” Toth was eventually committed to an Italian asylum and then expelled from the country, and even though the sculpture was eventually repaired, the attack left quite an impression. (A few months later, the National Lampoon ran a photo of the attack itself, Toth’s hammer-wielding arm raised in ecstasy, under the memorable caption “Oh my God, Pietà? I thought it said Piñata!” And some years after that, perhaps similarly liberated—or, alternatively, deranged—by the incident and its Duchampian precursor, Andres Serrano perpetrated his own Piss Christ.)

As it turned out, this most recent was not Pinoncelli’s first attack on Duchamp’s masterpiece. Back in 1993, in what to my own mind may count as the single most inspired feat of performance art of all time, Pinoncelli urinated into the sculpture as it lay on display in Nîmes, France. At the time, he defended his action, explaining how he’d simply been trying to “give dignity back to the object, a victim of distortion of its use, even its personality.” This time around, he amplified that exegesis by explaining to reporters how, “having been transformed back into a simple object for pissing into after having been the most famous object in the history of art, its existence was broken, it was going to have a miserable existence.” “Better to put an end to it with a few blows of the hammer,” he went on modestly, esteeming his own gesture “not at all the act of a vandal, more a charitable act.”

Ah, the Resurrection and the Life of Art!