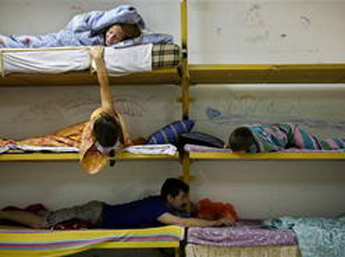 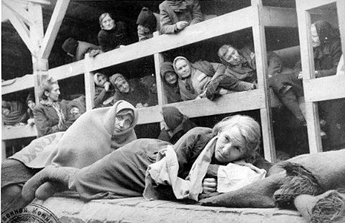 When Israel and Hezbollah were bombing each other this summer, a striking picture of Israeli children in a bomb shelter was published by the AP that called to mind a famous photo of women in the Auschwitz concentration camp. Israel was to be the embodiment of “Never Again,” a safe homeland for the Jewish people. Yet the scene has been conjured up once again.

Quite a striking juxtaposition, I agree, though I think I might have a slightly different take from Ms. Bland’s on how the images play themselves out, one which, as I think about it, might be seen as a continuation of my earlier thoughts on the Beirut/Warsaw convergence.

Because, yes, absolutely, contemporary Israelis generate bunk architecture in their bomb shelters uncannily reminiscent of the bunk shelves to which they (or their parents or grandparents) were themselves subjected, as Jewish victims, back in the Nazi concentration camps—albeit for virtually opposite reasons: in the earlier instance, they were being warehoused for servitude and death; in the latter, they are warehousing themselves for protection and life. And what are we to make of that repetition?

Is it that there are only so many ways to efficiently warehouse human individuals in a cramped space, and the Nazis and the Israelis both independently hit upon the same one from this relatively limited array of possibilities? Could be.

But I agree, I think there is something more going on, though in this instance the repetition compulsion feels a bit more like that evinced in that profoundly unsettling (and controversial) Liliana Cavani/Charlotte Rampling film The Night Porter (1974), the way in which victims fall back into the forms of their earlier victimhood, and the odd reassurance they find there. 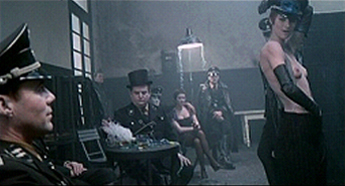 Stills from The Night Porter

Granted, of course, much more is going on in both the film and in the situation limned by the recent photo of the Israeli bomb shelter. But, as Ms. Bland’s gloss suggests, one of the comforts afforded by the repetition in this instance is the chance to imagine oneself to be as purely blameless and self-evidently innocent in the present as were one’s forebears back in those horrific camps in the past.

The trouble is that, in the current instance, the Palestinians in their bomb shelters in Gaza and the Lebanese in their bomb shelters in the south of their country have every bit as much call to think of themselves as history’s wretched victims as do the Israelis. Such that, yes, of course, never again, never again, we have to keep insisting Never Again. But that cry cuts all sorts of ways. And the question remains why people have so much trouble seeing that.

One hesitates to point this sort of thing out, especially given the current climate. Indeed, we postponed this posting by several weeks so as to steer well clear of that looming crackpot extravaganza, the so-called Tehran Holocaust Deniers Conference of a few weeks back. It may be worth noting that, as originally conceived, that conference had been called to address two questions: first, whether the Holocaust ever even occurred as commonly described, but then, second, even if it did, why the Palestinians have been forced to bear the overwhelming brunt of its legacy. In the event, the conveners never did seem to get past the first of their topics—a sick, depraved, deeply anti-Semitic assertion, to be sure, even when phrased, faux-innocently, as a mere question. The thing is, the second query is nowhere near as simple to dismiss, though by being yoked in this fashion it gets smeared with the depravity of the first. But what would it be like to ask that second question fresh? Could one even try to in the current climate without being accused of anti-Semitism, or, at the very least, of being a self-hating Jew?