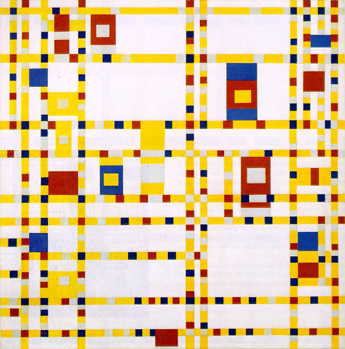 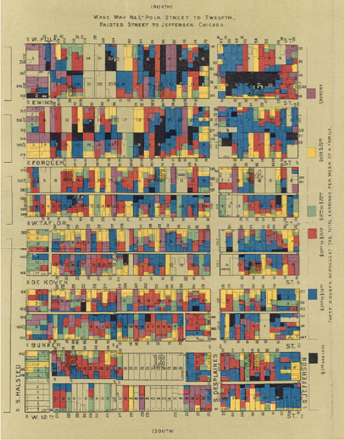 Isn’t that uncanny, and yet, on second thought, not as surprising as all that?

Surely part of what was so vitalizing Mondrian during his wartime exile residence in New York, veritably shaking him to his timbers (after all, compare that American Broadway Boogie-Woogie of his to the sort of thing he had been doing a few years earlier back in Europe),

was the ethnic vitality of the city, the racial and income mix, the wild jostling of colors (not just the lights of Broadway but the skin colors of the parading boulevardiers—not the sort of thing he would have encountered in well-ordered, homogenous Holland), and all those jostling sounds (jazz! Boogie-woogie indeed)—the sheer vitality of all that. The sort of thing highlighted, in turn, in the sorts of contemporary graphic studies being generated by sociologists of the sort Ms. Lee spotlights in her parallel submission.

But note, of course, that such a mixing of races and cultures was precisely the sort of thing that had been so upsetting Europe’s fascists, and, in particular, that resolutely traditionalist young painter Adolf Hitler, who, damn it all, knew how to paint a house that looked like a house, a street that looked like a street, a meadow that looked like a meadow. 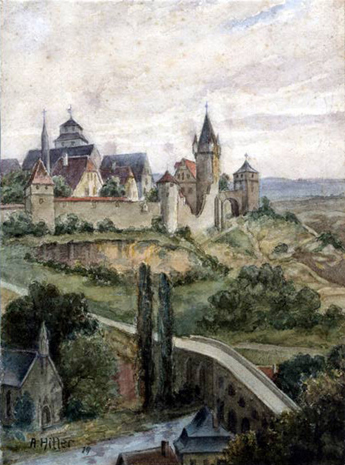 A 1919 watercolor painting of Laon, France, by Adolf Hitler

Unlike all the modernist crap, which was infested with African, Asian, and Jewish influences (and conspicuously championed, at least in his mind, by Jewish critics, dealers, and collectors). In this context, it is worth wondering whether the upsurge of fascism in Germany in the ‘20s wasn’t as much an expression of cultural revulsion against rampant Weimar modernism as anything else (whether, in Hitler’s case, he didn’t first hate Jews because he felt they championed modernism, rather than the other way around, hating modernism because he felt it was championed by Jews). Nazism was at its very core a movement of cultural reaction, an attempt to save some imagined pure Aryan/European culture from these upstart polyglot polluters. Hence the Nazi regime’s emphasis from the very start on exposing the baneful influence of so-called degenerate (entartet) art and degenerate music. 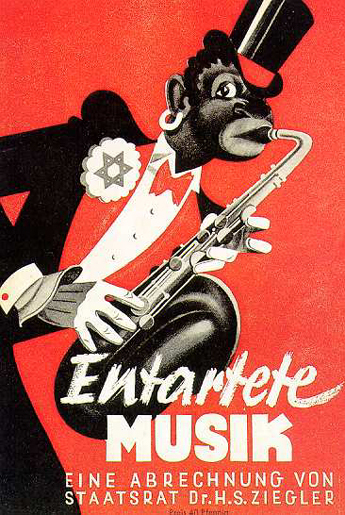 I should know: my grandfather, the Weimar modernist composer Ernst Toch (his already notably Semitic nose further accentuated in the doctored portrait), was featured in the music wing of the notorious Munich “Degenerate Art” show of 1937, the most heavily attended exhibition in the Third Reich (which makes you wonder), and, of course, the same exhibition where the non-Jewish Mondrian was notably featured in the art wing.

The fact that artists and musicians as such were aggressively stigmatized from the very outset of the Nazi upsurge in turn explains why so many of them managed to emigrate early on, thereby escaping the fate of so many of their more conventionally employed compatriots (shoemakers, leatherworkers, booksellers, etc.), who only fully grasped their own coming fates too late. And hence, in turn, the remarkable encounter of the modernist avant-garde with the United States, as emblemized so tellingly by Mondrian’s painting, and vice versa, as evidenced, for example, in the subsequent upsurge of abstract expressionism: viz., this 1956 lunch-hour poem by that poet laureate of the abstract expressionists, Frank O’Hara.

A Step Away From Them

It’s my lunch hour, so I go
for a walk among the hum-colored
cabs. First, down the sidewalk
where laborers feed their dirty
glistening torsos sandwiches
and Coca-Cola, with yellow helmets
on. They protect them from falling
bricks, I guess. Then onto the
avenue where skirts are flipping
above heels and blow up over
grates. The sun is hot, but the
cabs stir up the air. I look
at bargains in wristwatches. There
are cats playing in sawdust.

On to Times Square, where the sign
blows smoke over my head, and higher
the waterfall pours lightly. A
Negro stands in a doorway with a
toothpick, languorously agitating.
A blonde chorus girl clicks: he
smiles and rubs his chin. Everything
suddenly honks: it is 12:40 of
a Thursday.

Neon in daylight is a
great pleasure, as Edwin Denby would
write, as are light bulbs in daylight.
I stop for a cheeseburger at JULIET’S
CORNER. Giulietta Masina, wife of
Federico Fellini, e bell’ attrice.
And chocolate malted. A lady in
foxes on such a day puts her poodle
in a cab.

There are several Puerto
Ricans on the avenue today, which
makes it beautiful and warm. First
Bunny died, then John Latouche,
then Jackson Pollack. But is the
earth as full as life was full, of them?
And one has eaten and one walks,
past the magazines with nudes
and the posters for BULLFIGHT and
the Manhattan Storage Warehouse,
which they’ll soon tear down. I
used to think they had the Armory
Show there.

A glass of papaya juice
and back to work. My heart is in my
pocket, it is Poems by Pierre Reverdy.

Indeed, one might even hazard a preliminary Theory of Cosmopolitanism. To wit, that the jostling mixing of ethnic, religious, national, and cultural minorities is of the essence of urban cosmopolitan culture—the sort of thing you had in Spain up through the 15th century, or in Vilnius and Prague and Warsaw at the turn of the last century, or in Berlin in the ’20s, in Kampala in the ’60s, in Belgrade and Sarajevo in the ’80s … That such polyglot, polymorphous jostling sometimes generates an anxious purist nationalist revulsion, which can transmogrify into a bout of ethnic cleansing, precipitately emptying the afflicted country of all its minorities (and much of its cultural dynamism), minorities who, fleeing and congregating elsewhere, spawn a fresh cosmopolitan flowering … in New York in the ’50s, for example, or in London today. There is thus an uncanny dialectical relationship between cosmopolitanism and ethnic cleansing, one that keeps sloshing and rebounding across the centuries, itself (incidentally) helping to promulgate a whole range of convergent epiphenomena.