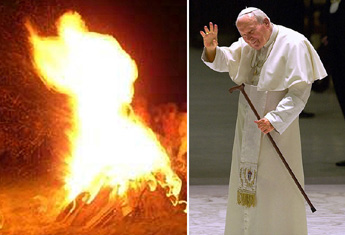 These are actually before-and-after shots, and you’ll notice it also works if you read right to left. This is, of course, the CliffsNotes version of the World’s Greatest Story, in which the cold, established old guard finally becomes soulless enough to BURST INTO CRAZY FAST CHAOS AND REVOLUTION before simmering and establishing a new cold guard.

Questions: Fire and the pope seem pretty different at first, but are they really? Is being the pope better than being on fire? Should “pope” be capitalized?

Answers: The tingly-godly feeling you get when you settle into some Xtreme prayer is probably the same as the burny-dancy feeling fire gets when it’s on fire. That is to say: being on fire is not better than being the pope (or vice versa), since both have similar spiritual goals. Therefore, “Pope” makes just about as much sense as “Fire,” unless speaking about specific popes or fires (e.g., Pope John Curtis Jr., the Iroquois Theater fire, etc.).

Cool fact: Fire and the pope need each other. Without fire and dynamic beauty, there would never have been such a thing as religion in the first place. What message of love and greatness would have been worth writing down if not for fire? The only reason they were written down at all was because fire has such a short life span, and retelling the story is a way to keep the party going. Sacraments became the way to preserve and reconnect with that fire in the cold times. But, as time goes on, something happens: the sacraments start getting really boring. The solution? Burn it all down! The pope is standing on kindling for a reason.

Thanks,
Olai Feia of Atlanta

P.S. Please don’t discount my entry just because I’m a kid and you find my writing annoying. I promise I’ll keep practicing. Someday I hope to be good at it.

But, first off, what exactly are we looking at here?

A quick Web search reveals that the left-side image was taken by a certain Gregorz Lukasik at a bonfire celebration in the mountains near Katowice, Poland, the birthplace of Pope John Paul II, on April 2, 2007, the second anniversary of the pope’s death. (The picture on the right was taken during a papal audience six years earlier.) Mr. Lukasik suggests that he only realized what he had after he got home and reviewed his pictures. He began showing the picture around, the church and then the Vatican got wind of the images, the Vatican News Service posted them, and websites throughout Europe began crashing in the ensuing ecstasy.

So: that’s what we are looking at.

Now, as for Mr. Feia’s commentary, beginning with his P.S., I am reminded of a passage at the outset of a book by French phenomenologist Gaston Bachelard:

We have only to speak of an object to think that we are being objective. But, because we chose it in the first place, the object reveals more about us than we do about it. What we consider to be our fundamental ideas concerning the world are often indications of the immaturity of our minds. Sometimes we stand in wonder before a chosen object; we build up hypotheses and reveries; in this way we form convictions which have all the appearance of true knowledge. But the initial source is impure: the first impression is not a fundamental truth.

The introduction continues apace like that for several more paragraphs, before zeroing in on its subject:

still has the power to warp the minds of the clearest thinkers and to keep bringing them back to the poetic fold in which dreams replace thought and poems conceal theorems. This problem is the psychological problem posed by our convictions about fire. It seems to me so definitely psychological in nature that I do not hesitate to speak of a psychoanalysis of fire.

And, indeed, the spare text that follows, The Psychoanalysis of Fire (1938), is just teeming with stuff that I suspect Mr. Feia would find of (shall we say) consuming interest, including chapters on the Prometheus complex, fire and reverie, sexualized fire, idealized fire, and even a side treatise on spontaneous combustion, which Bachelard (citing centuries of authoritative theorists, all the way up through Zola) simply attributes to the ingestion of way too much alcohol.

So there’s that. And then, with regard to prior reveries on the fate of this particular pontiff, I can’t help but be reminded of Italian artist Maurizio Cattelan’s hauntingly enigmatic sculptural tableau, The Ninth Hour, from 1999 … 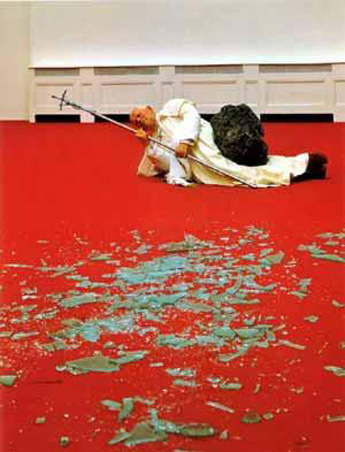 … which, incidentally, when shown in Poland back in 2001, managed to get the whole gallery shut down. Why people should savor an image of the pope exploding into fire but be scandalized by one of him felled by a meteorite is a subject for meditation. Any thoughts, Mr. Feia?