by Matt Haber and Charles Mudede

From the blog of Seattle’s
alternative weekly paper The Stranger.
(http://slog.thestranger.com/2008/04/rock_bottom)

Rock Bottom.
The image on the cover of today’s New York Times … 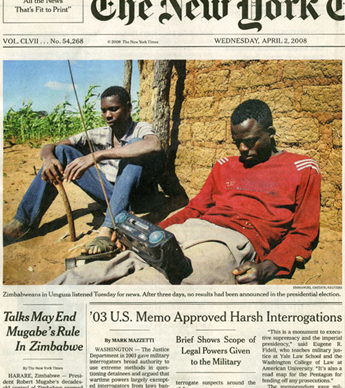 … brought to the surface of my awareness this painting: 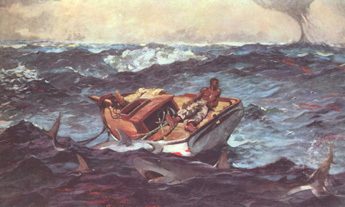 And that painting brought to the surface this other painting. 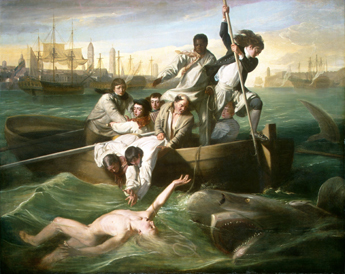 But the first image, the image from rural Zimbabwe, is the true image of being stuck in life. Those young men have nowhere to go, particularly the one with the bust radio on his legs. The baked wall of the hut, the dead dust, the sole source of energy, the corn, that’s not growing fast and plentifully enough—this is the rock bottom of the world. I don’t think they are listening to the results of the election. Not news, but music. On the radio Oliver Mtukudzi sings “Ruki,” a sad but pretty song about how certain people are just lucky (“ruki”) and others are not.

Friend of the Contest Matt Haber turned us on to this recent Web posting by The Stranger‘s Charles Mudede, relating a recent New York Times photo of desperate stasis in Zimbabwe (waiting out news of the results of the recent presidential election) to Winslow Homer’s The Gulf Stream (1899), in which Homer, in turn, was clearly riffing on John Singleton Copley’s Watson and the Shark (1778). (Robert Hughes offers an interesting comparison of those two paintings in his American Visions: The Epic History of Art in America, noting that in the Copley painting rescue is near—and indeed Watson did live to tell the famous tale—whereas in the Homer the lone, black shipwrecked sailor’s circumstances seem decidedly less promising. Peter Wood, for his part, in an essay reachable by way of the Wikipedia entry on the painting, has suggested that, with The Gulf Stream, Winslow Homer may have been intending a commentary on the dismal situation of blacks in the post-Reconstruction South, as Lincoln’s democratic vision precipitately faded during the final decades of the 19th century.)

I myself might have added Théodore Géricault’s Raft of the Medusa, from 1819, to the mix, 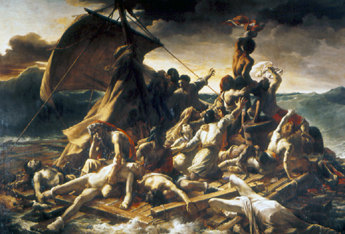 noting how the polarities of news-spreading are now conspicuously reversed: In the Géricault and the Copley, the painters were depicting and further broadcasting imagery of at-that-time widely reported and discussed events in the news. In the Times photo, the guys in the picture are portrayed as themselves waiting out, waiting for, the news, though the same sense of shipwrecked desperation conspicuously pervades all the scenes (and people of color are prominent in each).

As for what it’s like to sit there, in the comfort of our breakfast nooks, gazing on the desperation of others, I am in turn reminded once again of that Eric Fischl painting I cited a while back (see Contest Winner No. 9): 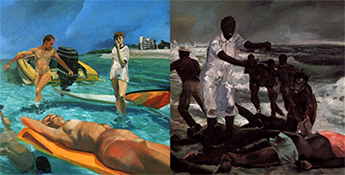