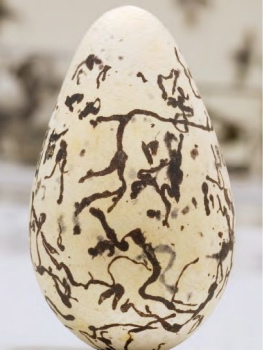 Egg of the Common Murre

Variations in color and marking on the eggs of the Common Murre are dramatic, ranging from white to pale blue, dark blue with black splotches, honey-colored fine lines, and smoky smears. These markings suggest visual connections to other worlds, from the lines made by a ceramicist’s glaze, to canvases by Jackson Pollack or Franz Kline, and even to what looks like a celestial map over an imagined pole.

The calligraphic effects so pronounced on blackbird eggs may appear over the entire surface of the shell on certain eggs of the Common Murre, dancing and twisting in lines reminiscent of Japanese writing or Chinese brush painting, executed with flourish and grace. In the example below I photographed the circumference of this egg one section at a time. Then, my husband Dennis and I assembled the pieces into a “Mercator” projection.

The effect of stitching together these slices creates a large mural of acrobatic monkeys swinging from vines, a young chimp riding a unicycle, gibbons in free-fall. But then, looking again, a “vine” becomes the outline of the back of a bull, emerging now like an ancient creature from the walls of Lascaux. I begin to think about the connections between avian and human art. In1964, as a self-portrait, Robert Rauschenberg made a pen-and-ink drawing of his fingerprint for a New Yorker profile. 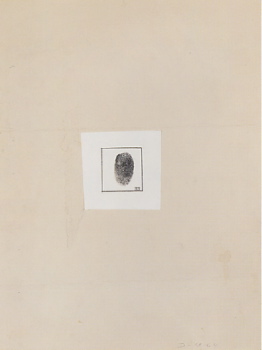 The whorls of the print are like patterns on an egg. The shape of the impression is itself like a bird’s egg − slightly elongated, with one end narrower than the other.

And then, one day, while reading a book about the painter Francis Bacon, I opened a page to the artist’s drawings from an exhibition catalogue of the work of Chaïm Soutine. These quick sketches of human figures were like the markings made when the egg turns or pauses as blood (for paint) lays down these traces. Bacon’s drawing seemed to mirror, if not the content, then certainly the calligraphic style, of this particular egg. 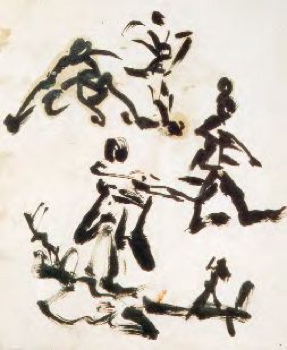 Is that cool, or what?

But what is the deal with those Murre markings? (Common Murres, incidentally, are cliff-dwelling sea birds, who lay one egg at a time, the egg strikingly elongated and bottom heavy like that so as to prevent its rolling out of the nest, or rolling anywhere for that matter). How do the markings arise and, what are they for, evolutionarily speaking? Well, off to the web, where we find the following (via stanford.edu/group/stanfordbirds/text/essays/Color_of_Eggs.html):

Seabird species that nest in gigantic colonies tend to have eggs that are extremely variable in both color and markings. Their colors, like all egg colors, are from pigments produced by glands in the female’s oviduct. As the egg moves down that tube the colors are squeezed out onto the shell. As ecologist Bernd Heinrich put it: “… the motion of the egg affects the color patterns. It is as if innumerable brushes hold still while the canvas moves. If the egg remains still there are spots, and if it moves while the glands continue secreting, then lines and scrawls result.”

In other words, the Murre’s egg is initially white in the womb, but as it enters the oviduct during the process of laying, that is, as the egg itself starts being expressed, it gets imprinted with all those amazing lines and whorls (patterns which in turn render the egg strikingly individual amidst the profusion of other such eggs, the easier to be identified by its mother or father, both of whom, incidentally, take turns sheltering the egg till it hatches).

Expression, indeed. For what else, in the end, is Francis Bacon or any other artist doing in the moment of (pro)creation, other than expressing, exuding, the essence of his personality onto the empty white canvas before him?