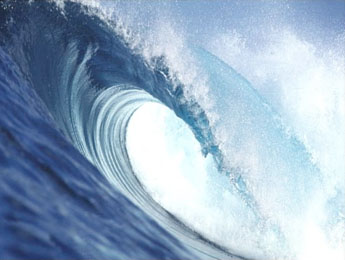 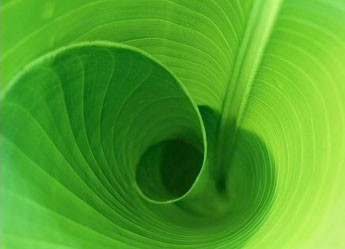 The ribbed veinal structure in the leaf on the bottom creates the frame, the skeleton through which the element of water expresses a similar curve to the one shown in the purely liquid image above. Ancient studies of the makeup of the world often held Water as an essential element of the cosmos, an irreducible state of energy, which was unique, royal, and mysterious. Air, Fire, Water, Earth, in order from ethereal to most palpable, were considered to be archetypal natures of matter that combined and permuted themselves to create the entire panoply of the Creation.

This may sound archaic to some, but if we examine the current dominant paradigm for describing the natural world: the Periodic Table, we will find, well, convergence. The elements of the Periodic Table are clearly each most at home in a particular state of matter, often requiring extremes of energetic activity from the environment (measured by temperature) in order to change from the natural state to another. Based on this assessment of an element’s natural material state, it is easy to categorize the Periodic elements into classes of Gaseous elements, Radiant elements, Liquid ones, and those elements taking a Solid form. Air, Fire, Water and Earth.

In this particular convergence we see the nature of liquid, which enables such elegant curvature, expressed through tidal forces above, and through botanical anatomy below. To be clear, completely different structures, namely unseen forces and physical capillaries, are producing the very same curve, evidence of an underlying nature.

The End of the Beginning.
SUBMITTED BY HOLLY DUNWORTH 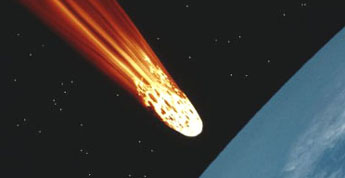 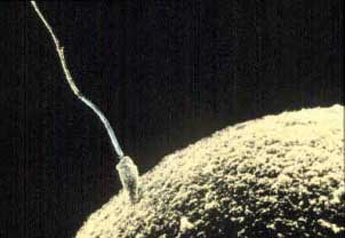 Collision of asteroid and earth. Union of sperm and egg. Converging images of converging life-giving convergences.

The asteroid that did in the dinosaurs spared tiny mammals that begat the Tyrannosaurus-free animal radiation we are part of today. By delivering half our genetic code to the egg, sperm are similarly crucial to human existence.

But despite their creative essences, visions of asteroids and rogue sperm can form lumps of dread in our guts. They signify the end of life as we know it, the demise of much of our ecosystem including the extinction of ourselves, of our independence, of sleeping in on Saturdays, of using the f-word.

Ignore doomsday preachers and loathsome minivans for a moment, and see these images for what they really are: the first inklings of genuine purpose, of being part of something more than just a curious smear on the lens or the mattress. No more hurtling vacuously through the galaxy and no more disappointing thwaps against latex.

And what looks and feels like passionate fire fueling the journey is just the spectacular by-product. Gravity and oosight are all these messengers need to achieve cataclysm.

True martyrs for the cause, when convergence is complete our heroes are totally obliterated. All that remains are the scars of impact: A crater and a geochemical fingerprint dusted over the global dermis. My father’s cavernous nostrils perched over my mother’s mother’s mustache.

Pretty pretty, this matched set from Hunter and Dunsworth: Nature thrumming and humming, profligate in her daydreamy patterning, in her seeming inability to stop patterning and in turn to ensorcel us all into all that relentless pitter-patterning. (“You talking to me? You talking to me? Nobody else here, it sure seems like you’re talking to me.”) In the book, I focused more on a slightly different set of patternings—those having to do with trees and branchings and dendrites and decision trees and on out toward the Internet, etc.—but these too seem wonderfully pertinent.

Andy’s first, for what we are of course dealing with here is the golden section, which in fact does seem to keep recurring everywhere in nature and is one of the magic mainstays of Sacred Geometry. 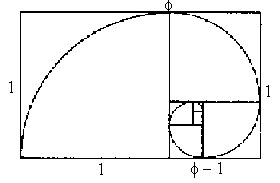 Essentially, take a rectangle with its short side of length a, and its long side of length a-plus-b, such that when you slice off its internal a-by-a square, the remaining rectangle off to the side (b-by-a) will be proportionally the same, such that when you slice off that rectangle’s internal b-by-b square, the remaining rectangle will be proportionally the same, such that … and so forth. Even describing it thus—and we are talking about a golden rectangle, well beloved by the ancients (viz., the Parthenon) and by all artists since and by all of us in our secret heart of hearts—you can begin to sense the inwhorling spiral it encases, the very spiral we see in Andy’s two images. But why does it appear everywhere in Nature? There are many accounts, but one interesting clue comes when you pull the drain in a sink full of water (or flush a toilet) and observe the way the water downspirals, clockwise in the Northern Hemisphere and counterclockwise in the Southern, thereby suggesting that this rampant tendency may have something to do with the earth’s rotation (and the patterning of the sun’s repeated arc over the sky, the moon’s tidal pull, etc.). There’s a whole literature on this: don’t get me started. But gorgeous instance, Andy!

Which in turn brings us to Holly’s marvelous offering (which in turn seems to be rhyming nicely with Daddy X’s from last week). Meteors and sperms: one might also invoke in this context Lewis Thomas’s seminal intuition as to the entire terrestrial biosphere’s being like one giant cell—and then as well, the theory that the first organic chemicals may have arrived on our otherwise sterile if roiling primordial planet, eons ago, meteorborne, from Mars maybe, or who knows where.

But my mind drifts into other associations as well, and specifically toward the ancient Greek notion (this before Socrates and Hippocrates, but buried deep deep in the language, as uncovered by that remarkable old English don R.B. Onians in his midcentury masterpiece The Origins of European Thought About the Body, the Mind, the Soul, the World, Time and Fate, a book that, uncannily, somehow manages to live up to its title), their notion, that is, that the fluid surrounding the brain in its cranial cavity was the same as spinal fluid and that spinal fluid was in turn the same as semen! Hence those wonderful secret depth-charge puns in the language: cereal and cerebrum, kernel and cranial and crown, genes and genius, hysteria and hysterectomy, corn and horn and horniness. (For more on this particular spinout, see Norman O. Brown’s “Acteon” essay in his book Apocalypse/Metamorphosis, and my own riff on same in the last footnote to my Mr. Wilson’s Cabinet of Wonder volume.)