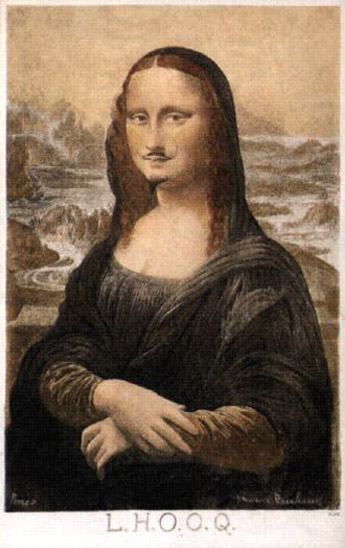 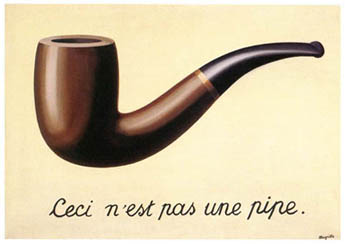 A mustache and a pipe—two icons of surrealist painting (Duchamp’s treatment of Mona Lisa in L.H.O.O.Q. and Magritte’s infamous play on semiotics in The Treason of Images, respectively) are “painted” on a young Asian woman with dyed blond hair. The thick black Sharpie pen is not the gesture of some graffiti artist but of the advertisers, as the black scrawl is embedded in an ad that mimics the logo of its product, a coffee drink. It would have been easy to tape an actual fake (never mind the paradox) mustache on the woman and stick a pipe in her mouth during the photo shoot, but the graffiti-like subsequent adornments resonate so much more. They empower the viewer. It’s as if we, standing on the platform waiting for the cringing metal worm, are holding the black pen in our own hands. Palpability is power.

“L.H.O.O.Q.” when mouthed in French comes out elle a chaud au cul, or, in English, “She has hot ass.” We all know Magritte’s Ceci n’est pas une pipe, or “This is not a pipe.” Between semantics and semiotics is a blind world. These words have a way of doing things to us. The tongue is the mind’s bastard. I wonder what “Boss” in Japanese is.

I imagine Duchamp and Magritte, those magicians of meaning, standing on the subway platform. A little laugh, a quick wink, I think might transpire. And what about Leonardo himself? Is it he behind that wondrous face smiling at us? Can lips wink? Is he wearing a wig? Ah, those guys. They could get off at Shibuya, the heart of Tokyo’s commercial district, ride the escalators upward and enter the world of advertising signs—the artifice of artifacts, blinking.

Another nice catch, nicely explicated. The only thing I would add here, regarding those Japanese ads in the first place, is how, bizarrely and quite conspicuously, “Ceci n’est pas une femme japonnaise.”