How to Create Your Very Own Crossword Puzzle

Recently, I got my very first crossword puzzle accepted by a real-life newspaper. Since this basically means that I’m a puzzle-making genius (and not, you know, super unqualified to write this kind of article), I thought I’d share some tips on how to make the best crossword puzzle ever. Enjoy!

Step One:
Get the right technology

First things first. When making a crossword puzzle, you’re gonna need the right software. Otherwise, this whole process will be an unending, dystopian nightmare from which there can be no escape.

So just download Crossword Compiler or Crossfire or some other program that has the word “cross” in the title, and you’ll be all set.

Step Two:
Come up with a theme

Like the gooey center of a deep-dish Chicago-style pizza, the most important part of any good crossword is its theme. Usually, a crossword’s theme consists of 4-6 answers that are, in some way, related. For example, sometimes the theme will feature answers that all have some sort of pun in them (ex. “Pardon my… STENCH”). Or sometimes the theme is just a bunch of similar things, like “phrases that start with the letter ‘Q’” or “things that scare people” or “songs about horses.” Or “songs about horses that scare people.” Basically, a theme can be anything.

So, hypothetically speaking, if you wanted to make a puzzle about, say, “America’s Cutest Antebellum Presidents”, the theme would appear in the puzzle as follows: 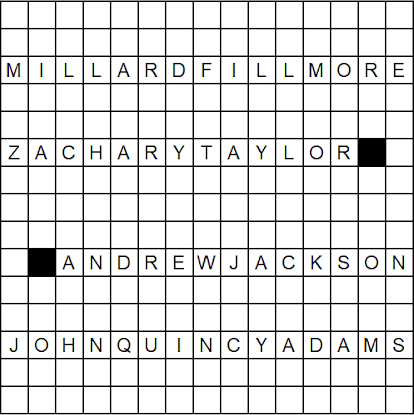 As you can see, since these four theme entries are all great examples of super-cute antebellum U.S. presidents, this would obviously be a really good theme for a crossword puzzle.

Of course, when coming up with a theme, there a few rules you need to follow…

On a standard crossword grid (15×15 squares on Monday-Saturday, 21×21 squares on Sundays), puzzles are almost always symmetrical. What this means is that, when you’re coming up with entries, they should all be of corresponding lengths (in the example above, see how the words match in grid-position and word-length).

On the other hand, here’s an example of a non-symmetrical grid, in a puzzle that I’ve titled, “Things That Don’t Exist”: 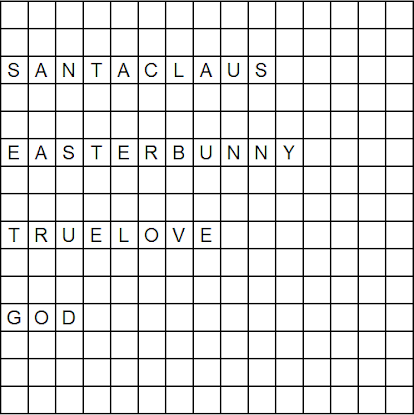 As I hope you will note, the above puzzle contains four things that clearly don’t exist. However, since these four entries are all of differing lengths (not symmetrical), this puzzle has no chance of ever getting published… even though it’s a really good theme!

Fortunately, most puzzle-making software will make things symmetrical for you. So, again, just make sure to download that stuff and you’ll be golden.

Unlike most Dan Brown books, one of the great things about crossword puzzles is that they don’t repeat the same exact words over and over again. In fact, 99.9% of the time, puzzles don’t repeat words at all.

So, when you’re making puzzles, make sure to use all-original words! Otherwise, here’s an example of a puzzle that does repeat words (meaning that, sadly, it will never be accepted by a reputable news publication).

This puzzle is titled: “A Pretty Cool Guy When You Actually Get To Know Him” 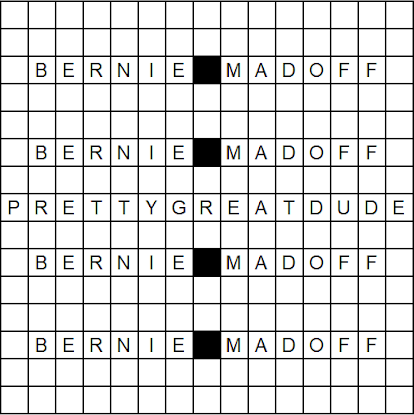 I cannot stress this next point strongly enough. DO NOT ADD PICTURES TO YOUR PUZZLE!

Sure. You may think it’s fun and cheeky to add a copy of your theatrical headshot into your crossword puzzle… but don’t! Newspapers will NOT publish this sort of puzzle! 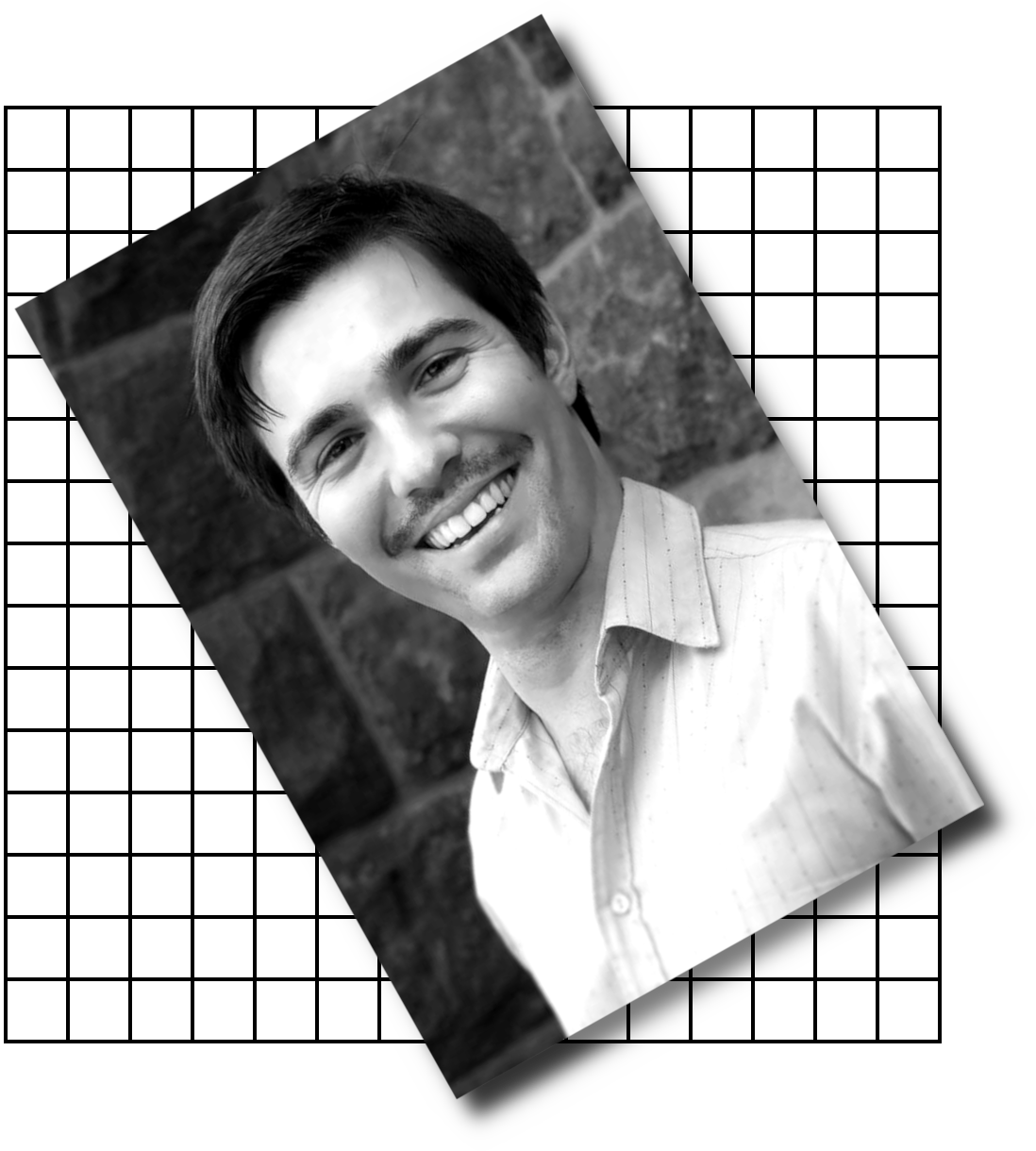 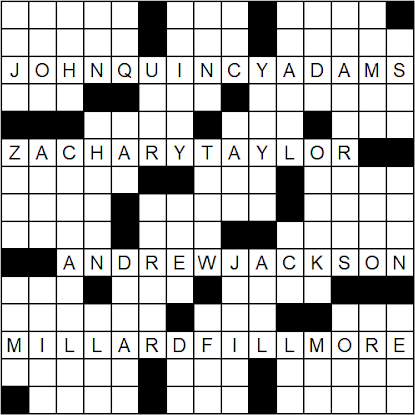 Now that you’ve come up with a theme, it’s time to add in the black border squares.

And, folks, if you thought that last step had too many rules, then you’re gonna flip when you see how many rules the block-adding portion of this guide has!

Pretty self-explanatory… like the puzzle’s theme, the border blocks should be placed symmetrically too.

(As I said, there are a lot of rules in this section. If it helps, feel free to imagine that you’re reading these rules while you’re going on an awesome cross-country road trip with your best friend: famous actor Jack Nicholson).

When you’re placing blocks, make sure that all the words in your grid are three letters or longer.

(Oh no! Look out! Cops! Cops! The cops are pulling you and Jack over!)

Rule Seven:
Don’t wall off parts of the grid.

When you’re making a puzzle, try to make the grid continuous. Blocks should never split the grid into multiple sections — so make sure the white blocks are always connected.

(Hey, wait a second… that isn’t a cop. No! It’s your other best friend: the famous actor Michael Douglas! Oh man! Yeah! This road trip just went from awesome to epic, baby!) 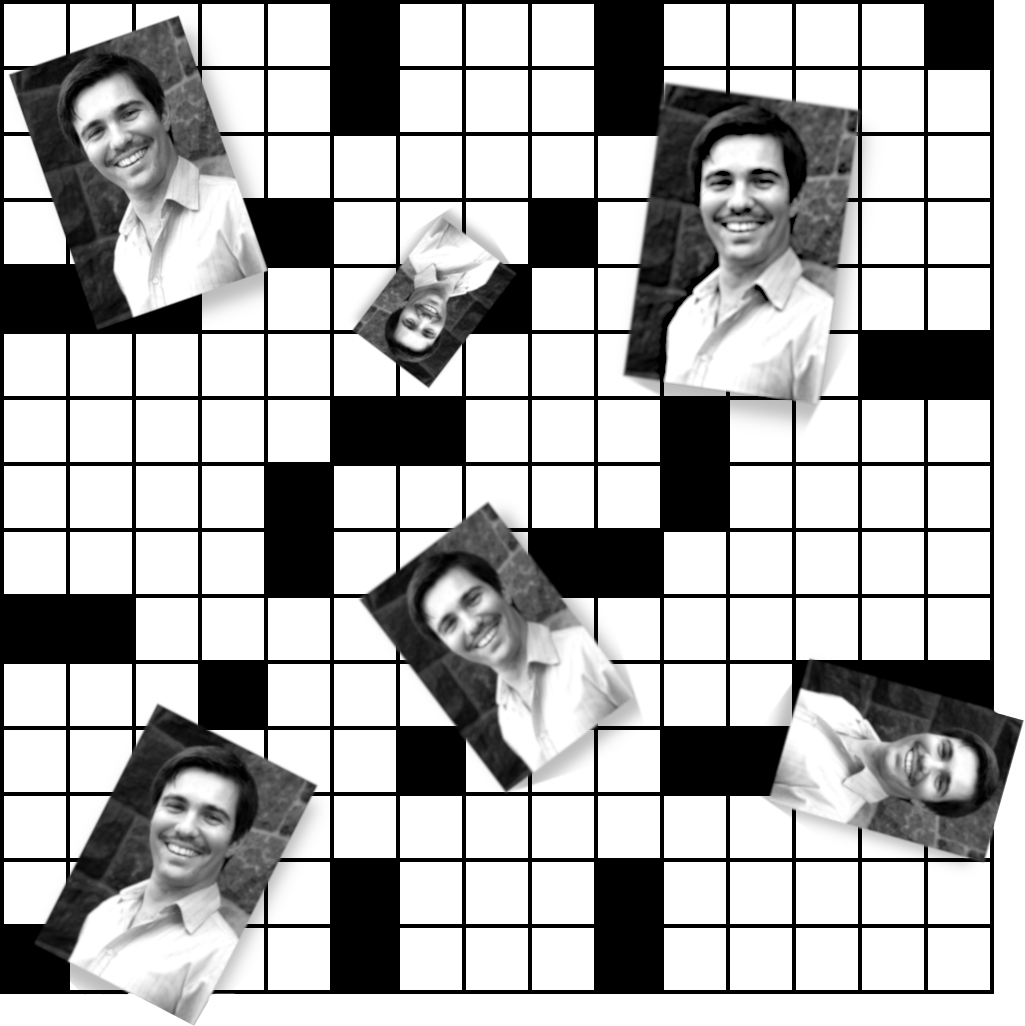 Step Four:
Add in the rest of the words! 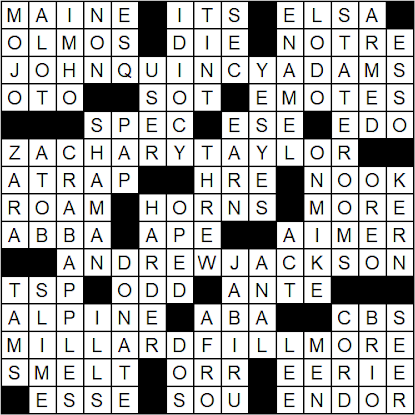 I don’t know. There’s probably a more eloquent way to phrase this. But just… here’s where you cram the rest of the words in there.

Basically, you’re gonna want to use this site or this site to come up with a bunch of fun, different words for your grid. And make sure that all the words you use are real words. Or well-known abbreviations. Or well-known phrases.

Wonderful! Now that you have all the answers in your puzzle, it’s time to write the clues for them! You see, without any clues, a crossword puzzle is exactly like a Dan Brown book — just a bunch of nonsense, random words that don’t make any sense on paper.

So the clues are important.

And you can bet your butt we’ve got some more fun rules for clue-writing! Let’s go!

Whoever said that “brevity is the soul of wit” clearly never had to write clues for crossword puzzles… because, sadly, that quote is way too long to be a crossword clue.

When writing clues, try to make them pithy, original, and concise — for example, if you were trying to write a clue for the word OREO (located on the right side of our “cute presidents” puzzle), you could use one of the following clues:

On the other hand, this would be an example of a very, very bad clue:

OREO: When my father was a young man, he would often go down to the corner store and use his weekly allowance to purchase this delicious treat. And now, in his elder years, my father looks back upon these weekly purchases with a wry, misty fondness — for, in many ways, they represent the fleeting and impetuous nature of his own childhood.

Rule 10:
Make sure your clues are factually accurate.

Here are some examples of factually-inaccurate clues:

Remember… you don’t want your puzzle to have clues like this.

That would be a serious no-no.

Step Six:
Send it off

And finally, once you’ve finished these five easy steps… you’re ready to send your grid off! Just print out your puzzle and mail it to the nearest newspaper (and don’t forget that pesky theatrical headshot!). 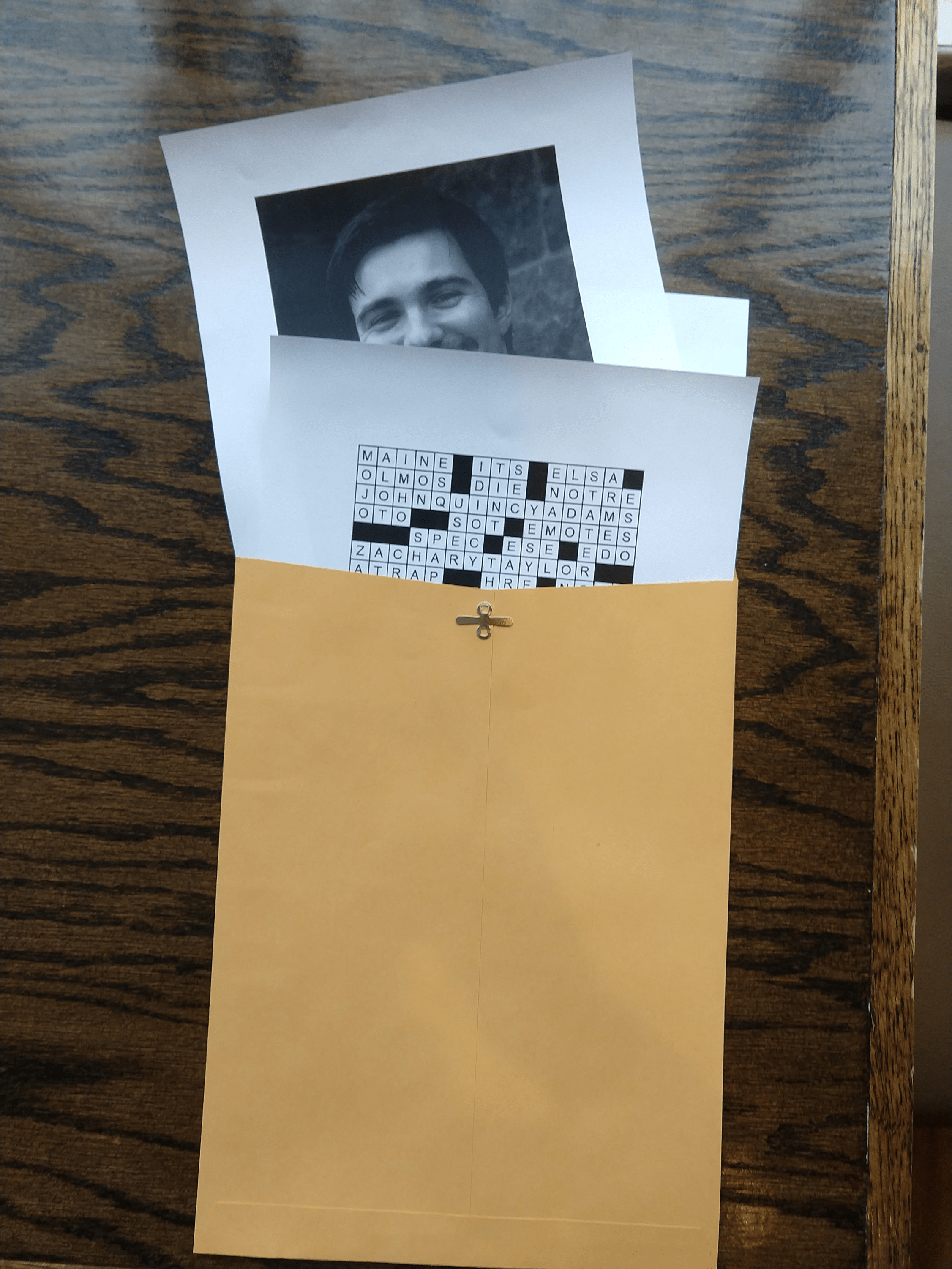 And you’re well on your way to publishing your very first, real-life crossword!

(Author’s Note: for an actually helpful guide on how to write crosswords, please read this instead.)