The Trump administration sure has a lot of ties to Russia, doesn’t it? Every day, you can’t help but read some new story about hacked emails, or Paul Manafort, or clandestine secret meetings in the Seychelles — all of which suggest a potentially illegal partnership between Team Trump and Vladimir Putin. And, with this increasingly suspicious foreign relationship in mind, it very much begs the question: Is it bad that the Trump administration’s ties with Russia are as implausibly convoluted and interwoven as the plot of the 2003 Christmas rom-com Love Actually?

Just consider how many inexplicably overwrought coincidences the two stories share. During the election, Sergey Kislyak (the Russian Ambassador to the United States) personally communicated with former National Security Adviser Michael Flynn, current Attorney General Jeff Sessions, and Adviser to the President/White House Innovations Director/Middle East Peace Broker/Son-in-Law Jared Kushner over the span of a few short months. Similarly, in Love Actually, the romantic Christmastime wedding between Juliet (Keira Knightley) and Peter (Chiwetel Ejiofor) was attended by a plucky American graphic designer named Sarah (Laura Linney) who was deeply in love with her firm’s creative director Karl (Rodrigo Santoro) who was an employee of Harry (Alan Rickman) whose company was catered by Colin (Kris Marshall) who, incidentally, was ALSO the caterer for the aforementioned Christmastime wedding of Juliet and Peter.

The fact that both of those scenarios have so many overlapping characters in so many ostensibly unrelated events, that’s bad… right?

And what about the President of the United States? In 2003’s Love Actually, a fictional President of the United States (portrayed by Billy Bob Thornton) attempts to seduce Natalie (Martine McCutcheon), who is the love interest of the British Prime Minister (Hugh Grant). As we all know, in Love Actually the Prime Minister is also the brother of Karen (Emma Thompson) who is, in turn, the wife of Harry (Alan Rickman) who, as well as being the boss of the aforementioned Sarah and Karl, is also the man who buys a necklace from Rufus (Rowan Atkinson) in order to seduce his secretary, Mia (Heike Makatsch), who, as we all know, is the next door neighbor of Natalie… the woman that the American President tried to seduce earlier in the film. It seems pretty wild that the President of the United States would personally be so intimately connected to such a convoluted, overlapping, and hellishly interwoven plot; a plot that, in all honesty, should only be deciphered by someone as qualified and impartial as an independent special prosecutor.

That last sentence is bad, right?

Here’s an infographic from the Washington Post, showing many (though not all) of the ties between the Trump administration and the Russian Government:

Now here’s a picture from Love Actually’s Wikipedia page, showing all the character relationships in the film: 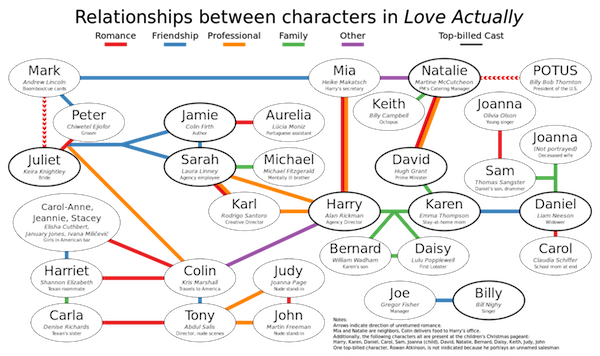 The second picture is a little more complicated than the first picture, but not by much! And that’s really, really bad… Right? I mean, how many more thematic similarities to Love Actually will it take for the nation to realize that something is deeply amiss in the White House? Will Donald Trump’s son, Eric, have to be seduced by Russian hush money (just as, in Love Actually, Daniel’s son, Sam, was seduced by Joanna)? Will Mike Pence have to figuratively get in bed with the Russian hacker Guccifer 2.0. (just as, in Love Actually, John literally had to get in bed with Judy)? Will Bill Clinton and Joe Biden have to ultimately intervene on America’s behalf (just as, in Love Actually, Billy and Joe’s Christmas album prompted the unlikely but incredible romance of Sam and Joanna)?

These are not easy questions to address. But, for the sake of our nation, they must be answered immediately. Because, quite frankly, if we allow this Russo-American plot grow any thicker, in a few weeks it could be more confusing, convoluted, and hard to watch than the plot of Being John Malkovich.

And that would truly be a catastrophe.