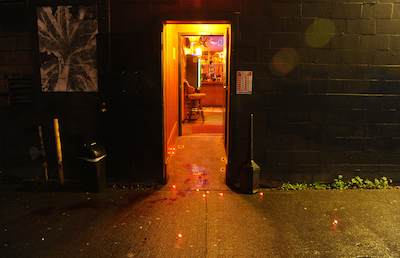 Main Entrance to the Twilight Exit.

As we left off, Greg is in my apartment, and we’re talking about the night he got shot. Greg just got to the part where he was standing in the alleyway when James appeared and pulled a gun on him.

“I wanted to get the gun away from him. His finger was right on the trigger. I remember asking him to take his finger off it.” As Greg continued speaking, James took a couple steps back, so he was about eight feet away from Greg. “Once he moved there was no way I was gonna be able to close that distance and grab the gun before he could shoot. He kept screaming, ‘Get the fuck out of my way. That bitch. I’m gonna kill that bitch. Get the fuck out of the way. She killed my dog.’”

“He wasn’t making a lot of sense. I figured this had something to do with his girlfriend. It was really confusing. I’d poured this guy beer before. I’d seen him in the bar, and I’d talked to him a little bit. Never about anything significant, but we’d never had a negative interaction either. Now this guy I peripherally knew was pointing a gun in my face for some situation I barely had anything to do with,” said Greg.

Suddenly the living room radio comes on. It’s a clock radio, a blocky wood-vinyl thing I’d bought from Goodwill for $4. Static cuts in and out, but I hear a Mexican Ranchera song with a heavy polka beat and wildly festive trumpets. I don’t remember tuning into this station. Maybe the knob got bumped into the alarm setting somehow, I don’t know. I get up and shut it off. I say, “Woah. Sorry. That’s never happened before.”

Honestly, I’m rattled. I don’t think Greg is, though I’m embarrassed to ask, so I decide to play it cool. I say, “Ghost! Get outta my house!” and I make my voice go all spongy and sing-songy, so I sound like a wailing cartoon lady. We both laugh, and I sit back down. Then Greg keeps talking.

“I remember thinking that maybe James wasn’t gonna shoot. If he’d really wanted to kill his girlfriend, he could’ve waited until she left the bar. I was hoping I could get him to leave and just think for a second about how fucking stupid this whole thing was. Or maybe I could stall him long enough that someone would come around the corner to get into the bar, or someone from inside would come out and see what was happening.”

“Can you remember any more about what you were saying to him?” I said.

“Just everything I could think of. I kept repeating his name. I was calling him Jason, and that probably didn’t help. But when I’d talked to him before, he’d introduced himself as Jason, not James. I still don’t understand why he lied to me about his name. I was a complete stranger at the time, and it was a very casual introduction. So I was like, ‘Jason, Jason, please calm down. You don’t want to do this.’ I was saying, ‘Dude, don’t shoot me, please don’t shoot me, there’s no reason to shoot me. You don’t wanna hurt anybody. You’re gonna hurt somebody you don’t mean to. I don’t want you to hurt anybody.’”

That’s about when Steve, a Twilight regular, zipped through the alley on his scooter. “He was stopping by to do his usual karaoke. I wanted to get his attention, but I don’t know that he saw anything wrong. He didn’t see the gun, he just saw the two of us standing there,” says Greg.

(Steve described this to me in a follow-up interview. He couldn’t hear anything because he had music in his headphones, he said, though he remembers seeing Greg’s face. He looked a little stressed. “I thought maybe Greg had to kick someone out because they were drunk and arguing.To ease the tension, I honked my horn. My scooter’s horn is very high pitched, and the honk is kind of comical. Greg looked at me and waved me off, so I drove past and parked up the way.”)

Greg was talking and talking, while James was backing him up, backing him up. Greg didn’t pay attention to his path until he found himself backed into the entryway. The doorway is recessed several feet, forming a narrow alcove. “I really didn’t want him to get inside. I was worried he would start shooting people indiscriminately. The Twilight is not that big. If someone got in there with a gun, I don’t even want to think about what kind of damage they could do.”

Soon after, a bartender tried to come outside for a cigarette. “Natalie couldn’t get by because I was standing right in front of the door, and it wouldn’t open all the way. She said ‘What’s wrong,’ and I said, ‘Nothing. Go back inside.’ I tried to turn my head away from James, and as quietly as I could, I said ‘Call 911,’ and I kicked the door closed. I’ve never been rude to my coworkers, so I was really hoping it would send a message that things were very wrong. Right after that was when James lowered the gun, pointed it at my leg, and pulled the trigger.”

“Why do you think he chose that moment?” I ask.

“He may have overheard me, he may have decided that he was committed to it. I can’t really say.”

I said, “So, you remember a distinct movement as James lowered the gun? Before that, he’d had it pointed at your face the whole time, right?”

“Yeah,” said Greg. “I don’t know. I think that maybe he didn’t wanna go through with it. I feel like it was actually really, really difficult for him. If it were easy for him, he would’ve shot me right away. I feel like he had to force himself to do it.”

“Wow. OK.” I said. We say nothing for a bit. I look at Greg. His expression is blank. I hear someone, a neighbor, clomping up the stairs outside my unit.

“All I remember is the sound,” said Greg. “It was loud. It was just: boom. For a second I thought, ‘Oh thank God, he didn’t hit me.’ Then I tried to take a step, and my leg wouldn’t move. I looked down, and there’s a hole in my jeans where the bullet went in.”

The bullet entered at the crease of Greg’s thigh, severing his femoral artery. Without medical attention, he would bleed out in minutes.

“I started to collapse against the door, and James grabbed my shirt and yanked me down,” said Greg. “At this point, I thought he was gonna keep shooting me. I began screaming as loud as I could. He kinda kicked me out of his way, and he stepped inside. Then I started hearing gunshots.”