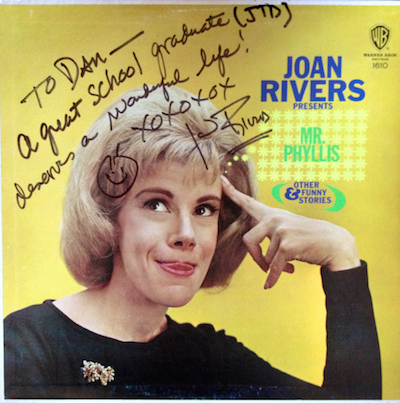 Joan Rivers was the first comedian I saw live on stage. Well, almost. It was the mid ’70s and I was in Las Vegas with my family. We were staying at the MGM Grand, where, as luck would have it, Joan was booked to play some shows. I had seen a few of her appearances on The Tonight Show, when my dad let me stay up to watch it. Coming from a family of brassy, salty-tongued East-Coast Jews, Rivers’ “Can we talk?” shtick resonated with me, even then. Maybe I didn’t get all the jokes, but I definitely got that she was really, really funny. So there I was, in my little blazer in the Celebrity Showroom, thrilled to see her in person.

Her opening act was Italian crooner Sergio Franchi. No disrespect to the late singer, but he bored me. I’m sure I wasn’t his target audience. I squirmed through his opera-infused set until finally I couldn’t sit still any longer. He was singing a heartfelt tribute to his mother and after what seemed to be about the 23rd utterance of “oh Mamma,” I yelled out “Mamma mia!” in a broad Italian accent at the top of my voice.

The. Crowd. Went. Nuts. Franchi stopped. The band stopped. With all eyes on me, my dad yanked me by the hand and whisked me out of the room. I knew I was in trouble, but the rush of exhilaration was intoxicating. I had gotten a huge laugh in a Vegas showroom—not some stinkin’ lounge—the MAIN room!

With that laughter still ringing in my ears, I’m pretty sure my subconscious made a decision about the rest of my life right then and there. The only bummer was that I didn’t get to see Joan perform that night. Fortunately, I did get to see her many other times in the years to come.

I met Joan in person a little while later, when I was in the 4th grade. Growing up in Los Angeles, many of my classmates were the children of some of the biggest stars of the time. Don Rickles, Bob Newhart and Carol Burnett’s kids all were in school with me. So was Joan’s daughter, Melissa. We were on the same swim team and Joan came to our first meet with a thermos of coffee, which she shared with the other parents in attendance, kibitzing with everyone. I was star struck. Soaking wet and shivering in my towel, I approached her after the meet and told her the story of my precocious heckle of her opener.

Joan’s eyes widened and she let out a squeal, “Oh my God, that was YOU?!” She threw her arms around me and gave me a long squeeze. She then told the story to every parent within earshot. My mom and dad couldn’t believe it; a beloved entertainer was rewarding me for my bad behavior. This was definitely not the message to give to a kid who had already been kicked out of one school in the third grade for being a smart ass. But at that point it was already too late; the die had been cast.

A few years ago, I took my mom backstage to visit with Joan. They were two ballsy broads—successful working mothers in an era when that was far from the norm—who didn’t let sexism stop them from achieving great things in their chosen fields, Joan in comedy and my mom in the fashion industry (where she had been the youngest buyer for the May Company and was one of the first female department store managers in the country). Mom was never one to crow about her accomplishments, but Joan, ever the talk show host, drew her out and drew her in. The connection was instant and the identification was strong.

The great thing about growing up is that you can gain so much more perspective and appreciation for your heroes and for your parents, for what they went through to accomplish all that they did. So that night I was happy to just stand back and watch with admiration as these two great women shared the stories of their respective journeys. Joan Rivers was a force to be reckoned with and her legacy is singular and without peer.

Thank you, Joan. For everything.