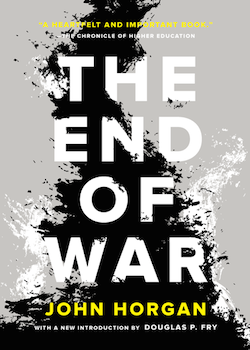 War is a fact of human nature. As long as we exist, it exists. That’s how the argument goes.

But longtime Scientific American writer John Horgan disagrees. Applying the scientific method to war leads Horgan to a radical conclusion: biologically speaking, we are just as likely to be peaceful as violent. War is not preordained, and furthermore, it should be thought of as a solvable, scientific problem—like curing cancer. But war and cancer differ in at least one crucial way: whereas cancer is a stubborn aspect of nature, war is our creation. It’s our choice whether to unmake it or not.

In The End of War, Horgan examines dozens of examples and counterexamples—chimpanzees and bonobos, warring and peaceful indigenous people, World War I and Vietnam, Margaret Mead and General Sherman—as he finds his way to war’s complicated origins. Horgan argues for a far-reaching paradigm shift with profound implications for policy students, ethicists, military men and women, teachers, philosophers, or really, any engaged citizen.

The End of War is now out in resplendent paperback form, with a brand new introduction by Douglas Fry. You can pick up a copy at your local independent bookstore, or here at the McSweeney’s Store. Recently, Horgan wrote about the book for the Scientific American Blog Network.

War Is Our Most Urgent Problem.
Let’s Solve It

Is there a more urgent problem in the world today than war? And when I say “war” in this post, I mean also militarism, the culture of war, the armies, arms, industries, policies, plans, propaganda, prejudices, rationalizations that make lethal group conflict not only possible but also likely.

My answer to the above question: No, there is no more urgent problem than war. Not climate change, pollution, overpopulation, oppression, poverty, inequality, hunger, disease.

If you seek solutions to any of these problems, you should also devote at least some effort to ending war, for several reasons. First, war exacerbates or perpetuates our other problems, either directly or by draining precious resources away from their solution. War subverts democracy and promotes tyranny and fanaticism; kills and sickens and impoverishes people; ravages nature. War is a keystone problem, the eradication of which would make our other social problems much more tractable.

Second, war is more readily solvable than many other human afflictions. War is not like a hurricane, earthquake or Ebola plague, a natural disaster foisted on us by forces beyond our control. War is entirely our creation, the product of human choices. War could end tomorrow if a relatively small group of people around the world chose to end it.

Third, more than any of our other problems, war represents a horrific moral crime. Particularly when carried out by the U.S. and other nations, or by groups that aspire to or claim the legitimacy of states, war makes hypocrites of us and makes a mockery of human progress. We cannot claim to be civilized as long as war or even the threat of war persists.

Yes, annual war casualties have declined sharply since the cataclysmic first half of the 20th century. Over the last few decades, war has killed far fewer people than cancer or automobile accidents. But in our heavily—and nuclear—armed world, war is a few decisions away from becoming exponentially more destructive. And even the killing of a single child by a U.S. drone, Israeli rocket or Syrian tank is an abomination that corrupts us all.

I wrote The End of War, which is being published today in paperback by McSweeney’s, to start a conversation about why we fight and how we can stop. The new edition includes a forward by anthropologist Douglas Fry, an authority on warfare, and an index. The End of War addresses in a sustained, concise fashion topics that I’ve written about over the past few years on this blog and elsewhere.

While writing The End of War, I sometimes fretted that war might end before my book was published, rendering it obsolete. That’s a bad joke, especially today, as war rages in Syria, Ukraine, Gaza, Afghanistan, Pakistan and Iraq, which the U.S. is bombing once again.

Our biggest challenge is making the transition from our world, which is still armed and dangerous, to a world in which war and even the threat of war have vanished. I am not an absolute pacifist. If someone attacks me or a loved one—or even a stranger–I would do my best to stop him. Sometimes violence is morally justified, even necessary, to thwart greater violence.

So the question is, how should we react to lethal group violence when it erupts in the world today? How, for example, should the U.S. have reacted to the 9/11 attacks? Or to the current advances of ISIS militants in Iraq? How should Palestinians react to Israeli violence, and vice versa? How should Russia respond to violent unrest in Ukraine?

My answer is that nations and other groups should act in a manner consistent with the ultimate goal of eradicating war once and for all. This is what I call the “end-of-war rule,” which I spell out in more detail in The End of War. My own country, the U.S., is the world’s most egregious violator of the end-of-war rule, and not only because over the past dozen years Americans have waged two major wars that have killed hundreds of thousands of civilians. The U.S. also maintains by far the biggest military in the world, in terms of spending, and it is the biggest arms dealer.

According to surveys I’ve carried out for more than a decade, the overwhelming majority of people view war as inevitable, a permanent feature of human existence. This fatalistic outlook is wrong, both empirically and morally. Empirically because it contradicts what science and history tell us about war. Morally because it perpetuates war by discouraging us from seeking solutions.

Even the most cynical fatalists, if asked whether they would prefer to live in a world without war, say, Of course! Every sane person wants peace. If you disagree with me about why wars happen and how we can end them, I’d love to hear your ideas. If we all join together in pursuing the end of war, we will surely succeed, not in some hazy, distant future but soon.