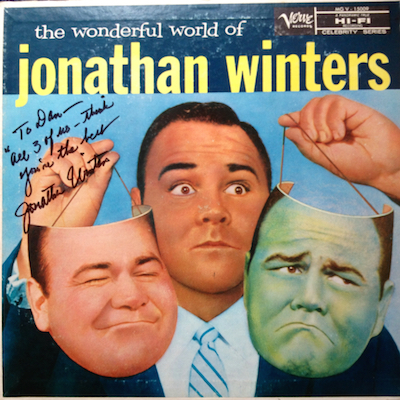 Long before I met him, Jonathan Winters’ legend loomed so large, he didn’t even seem real to me. He was a figure from history. Like the faces on Mount Rushmore. And if there was a Mount Rushmore of comedy, in my opinion, Jonathan deserved to be on it, along with Groucho Marx, Lenny Bruce, George Carlin and Richard Pryor. Yes, I know that would be five faces as opposed to the four in South Dakota. But hey, it’s my monument and if I want to have five, then I can have five.

While most people of my generation first came to know Jonathan as Mearth on Mork & Mindy, by that time I had already been listening to him doing Maude Frickert and Elwood P. Suggins on his records. I watched him destroy on Carson. I had also seen It’s a Mad, Mad, Mad, Mad World and thought that the scene where he tears apart the garage in the desert was about the funniest thing ever. When I started performing stand up in the mid 1980s, to speak of Jonathan among comedians was to utter the name of a deity. He wasn’t so much an influence as an otherworldly force. No one aspired to do what he did because it was understood that no one could.

In 1996, I was involved in the creation of a historic undertaking for the TV Academy called The Archive of American Television. The idea was to conduct the most comprehensive on-camera interviews with the most important figures from the history of the medium. My first interviews were with Milton Berle and Sid Caesar. They went well and were easy for me as I had pre-existing professional and personal relationships with both men. Then in 2002, I was asked to interview Jonathan Winters at his home in Montecito, California. I was excited, but nervous. Although I had met him briefly a couple of times before, I didn’t know if I’d be able to keep up with his legendary speeding train of a brain. And then there was that other thing. Intertwined with Jonathan’s legacy of brilliance, were the tales of his struggles with mental illness. Jonathan was one of the first celebrities to talk openly about being institutionalized for manic depression. This provided fodder for inspired comic routines but also created an apprehension on the part of many industry gatekeepers to hire him. Would I be up to the challenge of guiding someone so famously unpredictable through a lengthy overview of his life and career?

When I arrived for the interview, I rang the bell and the hulking, gruff former Marine opened the door. With a mouthful of breakfast, he informed me that the crew had already been sent down to the guest cottage. I thanked him and remarked how beautiful the property was. He quipped that “it should be” considering how expensive it was to live there. I laughed and he cracked an impish and devious smile with just enough of a twinkle in his eye to let me know that it was going to be okay.

Before we started rolling, Jonathan asked me a lot of questions. He was genuinely interested to find out who this young guy in a suit across from him was. It seemed like the crew faded into the background as we talked. Really talked. Like a pair of disobedient children, we were finally admonished that we needed to start rolling. We shared a secret smile and acquiesced.

The interview couldn’t have gone better. He was not only breathtakingly funny, but brutally honest and forthcoming about every aspect of his life. He was also remarkably emotionally accessible. Clearly a deeply sensitive soul, I immediately felt a strong connection with him. It made me wonder why anyone would have any misgivings about working with this lovely and beautiful man. It was a truly intimate conversation and I didn’t want it to end. (Eleven years later I would use the video of this interview as the spine of a tribute documentary that I produced at the request of his family for his memorial service.)

At one point, Jonathan spoke fondly about Bonnie Hunt, who played his daughter on the series Davis Rules. After we wrapped, I mentioned that Bonnie had a new series on ABC and asked if he was going to be on the show. He said that he and Bonnie hadn’t spoken recently. He also remarked that he had come to a melancholy kind of resignation that he didn’t get many calls to work anymore because of his age and because “they just don’t know what to do with me.”

As I drove home to Los Angeles, I called my dear friend Norma Safford Vela. Norma had co-created Davis Rules and was working as a writer/producer on Life with Bonnie. Like me, Norma worshipped Jonathan and I asked her what she thought about having him on the show. Norma jumped off the call and ran to speak with Bonnie. Minutes later she called me back and asked if I would give her Jonathan’s number, as Bonnie wanted to call him directly. Before I even got home, Jonathan was booked to shoot the next week.

He would later be nominated for an Emmy for that performance and Jonathan called me to say that his wife Eileen insisted that he should pay me a commission for my help. Of course I declined. Instead Jonathan sent me one of his paintings as a gift. It still hangs in my dining room to this day. But that’s not all I got. Because over the next few weeks, months and years, Jonathan would often call me. Just to talk. To joke around. And to invite me back up to Santa Barbara for lunch and to “play”. He would say, “there’s no one to play with up here.” I never missed an opportunity to go see him. To go play. And over time, a deep and meaningful friendship was forged. 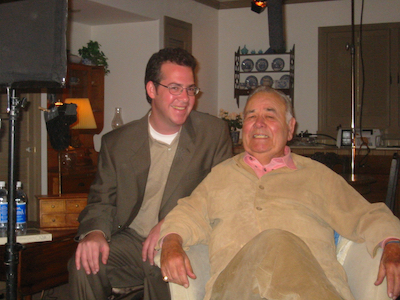