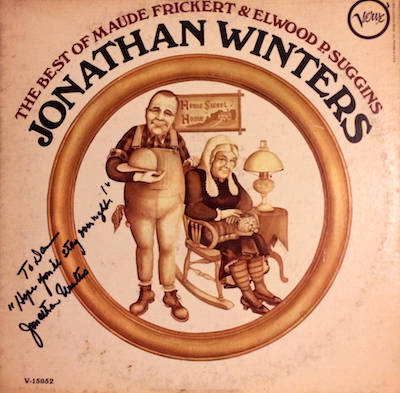 About ten years ago, my older brother Ben was rushed to the hospital in Santa Barbara for open-heart surgery. I was still living in LA at the time and drove up to be with him. As I couldn’t imagine being in Santa Barbara and not letting Jon know, I called him and asked if he wanted to have a meal while I was in town. He asked where I was staying and when I mentioned the name of the hotel, he quickly fired back, “Bullshit, you’re staying here.”

Eating with Jon was always fun. He made the best kind of scene at a restaurant. If someone recognized him and he liked him or her, there would be a show. If it was some “blue hair” (Jon’s term for a stuck up, well-to-do old timer), he’d mock them mercilessly, often without them even knowing it. The evening took my mind off my worries and I was grateful to be with my friend. We got back to his house at around 10 pm and I figured he would just want to turn in. Instead he suggested we sit up and have a couple of cigars. We talked until almost 3 am. I didn’t want the night to end but I was exhausted and finally said I had to go to bed. Jon asked what I would like to eat in the morning, as he would make us both breakfast. I can’t remember what I said as I didn’t figure either of us would be up in time for breakfast.

At dawn’s first light, I was jolted awake when my bed began bouncing around violently. No, it wasn’t an earthquake. Jonathan Winters was at the foot of my bed, shaking the frame with both hands and making King Kong noises! I grabbed my glasses off the bedside table only to see the devilish grin plastered across Jon’s round and boyish face, having succeeded in scaring the absolute shit out of me. He then ever so innocently queried, “You awake?” I nodded and laughed and got up to have eggs and toast with Jon before heading back over to the hospital to pick up my brother. Later Jon revealed that he had taken himself off his meds at that time, which was why he was only sleeping a couple of hours a night. I have to admit, it made me feel guilty for having enjoyed the experience so much. It also made me understand the complicated relationship Jon had with being bi-polar. The lithium was a necessity. But he hated it.

A few years later, Eileen, Jon’s wife of more than 60 years, lost her long battle with cancer. Jon was having a rough time and I was worried. I was living in Atlanta at the time but I called him a lot during that period. During one phone conversation, when asked how he was doing, he joked, “Well, I promised my kids I wouldn’t kill myself in the house because it would make it too difficult to sell.” His humor always had more than a touch of darkness, but I was getting concerned. Eventually, his doctors upped his lithium to help him cope and it went bad. He wound up in the hospital with lithium toxicity and I got scared we were going to lose him.

Once he got home, I flew out to be with him. Fumbling around for an inroad to that excitable, creative part of him, I asked him to think of something he always wanted to do. He thought for a minute and then said offhandedly that he had always wished he had gotten to play Babe Ruth. “That’s it? Done!” His eyes lit up. In the smallest voice I ever heard come out of that man, he asked, “Really?” I didn’t hesitate. “Absolutely. Let’s just do it.”

Quickly, we wrote a short script based on the legendary story when the Babe visited a sick little boy in the hospital and promised to hit a home run for him. Ours would be a macabre twist on the tale. Jonathan would play Ruth as an out of shape, over-the-hill ne’er-do-well who brings the boy a Yankees cap, a game ball and a box of Baby Ruth candy bars… which would ultimately thrust the ailing boy into diabetic shock. Yes, it was dark and twisted… just like Jon liked it.

Having produced and overseen a lot of scaled down productions, I knew I could pull this off. We wrote the entire piece to take place in the hospital room. One location would be manageable as a one-day production. It also would mean that Jon wouldn’t be overtaxed physically. I assembled a small cast and crew, paying everyone what I could and relying heavily on favors and goodwill. When told they would be working with Jonathan, everyone leapt at the opportunity.

It was a great day for all involved, but especially for Jonathan, who improvised a lot and delighted in joking around with every single person on set even when the cameras weren’t rolling. Usually I try to keep my productions loose and fun, but disciplined, as “making the day” is essential. But I told everyone in advance that it was Jonathan’s set. “Let him play.” His son Jay was there with him and kept coming over to me throughout the shoot and marveling how he could see his dad coming back to life. My diabolical scheme was working.

At the end of the piece, the Babe returns to the hospital room after having hit the homer late in the game, only to find the sheet pulled up over the boy’s body. We were well into the shooting day and I feared Jonathan was spent. But then something remarkable happened. Jon tossed out the script and improvised an entire soliloquy. He advised the dead child, “It doesn’t matter whether you’re an atheist, but when you get to heaven… lie.” With that, he snatched back the Yankees cap off the bed and ambled away.

After we wrapped, Jon gave every single member of the cast and crew a signed baseball as a keepsake. And in the days and weeks that followed, he seemed better and stronger and sharper. His son Jay told me that he really believed our little project made a difference for his dad. It played at a few film festivals but as Jon was never really well enough to travel, he could not be there to hear the laughter and applause. But every few months, he’d ask me for another couple dozen DVDs as he loved giving it to people. It would ultimately be his last on-camera performance.