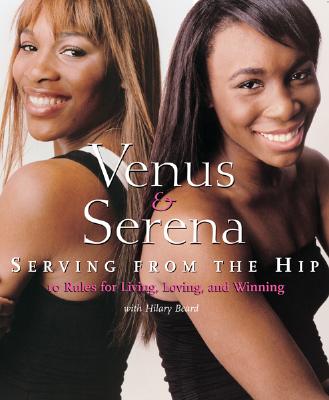 Under Review: Serving from the Hip: 10 Rules for Living, Loving, and Winning
by Venus and Serena Williams
with Hilary Beard
(Houghton Mifflin, 2005, 133 pages)

Come the turn of the twenty-first century, there weren’t many sports left in this world that would go higgledy piggledy over the budding stardom of two—what, ho! can it be?!—African-Americans, but I suppose there’s tennis for you. Born and raised in—dearie me!—Compton, California, sisters Venus and Serena Williams have owned the center of attention in women’s tennis since they were adolescent prospects in the late nineties, bright beads merrily jangling in their braids. They have also owned a lion’s share of the trophies given out in women’s tennis since about that same time.

With their very names culled from deep within the annals of Roman history and lore, and their domineering father figure oscillating between supportive figure and antagonist, the story of Venus and Serena is the sort of epic that Homer himself would have scribed, if only his own era contained more country clubs and gender equality. Incubated in daily practices conducted by their father Richard since toddling age, there is little that’s taken place thus far in the lives of Venus Williams and Serena Williams that wasn’t there for the express purpose of helping the sisters become tennis champions.

Consider it miraculous, really, that the story of Venus and Serena has never veered off into irredeemable tragedy. They have bent but never broken under Richard’s unforgiving training regimen; their careers were not derailed by forever-mending knees or elbows or shoulders; neither rocketed to success while the other built up jealousy in obscurity; nobody’s moral compass went reeling once they tasted the spoils of fame. Just as the two individual stars often team together to dominate doubles tournaments, they have united here to create Serving From the Hip, a comprehensive, all-in-one resource on living the good life for any girl tween.

In 133 picture-packed pages, the Williams sisters managed to stuff in all sorts of positive messages, on topics such as getting ready for your day:

And whenever you go outside, apply sunscreen with an SPF of at least 15. The ozone layer is thinning, so you need protection whether your skin color is ivory or ebony.

Or strategies on dealing with personal finance:

When it comes to cash, it’s better to stash than flash.

To pursuing an education:

So don’t let others trick you into believing that being educated isn’t cool. Karate-chop those people out of your life and keep right on studying and learning!

And of course boys:

The book is a bright-eyed and bushy-tailed guide to the vibrant, well-rounded, ruthlessly productive brand of modern femininity—a tennis-themed harbinger to the bulk tonnage of similarly intoned yogurt and tampon ads that will in no time besiege Serving From the Hip’s young tween readers.

I really haven’t had any interaction with tween girls since I myself was a tween boy, giggling uncontrollably from the back of science class at the astonishing definition that came up when my friend Raj typed the word “intercourse” into his handheld electronic dictionary. With that caveat, this does seem like sound (and parent-satisfying!) advice to give to tween girls. Indeed: why rush that crush? What parent would not be proud of a daughter who karate-chops away all those who would thwart the ongoing subtextual exegesis of The Giver?

Much like Michael Phelps, whose own self-help book was once reviewed in this space, Venus and Serena were pushed up and into professional competition almost immediately after their own tween years officially came to a close. Also like Phelps, the Williams sisters are considerably invested in letting it be known that their upbringing was just totally wholesome and well-rounded and fun and normal. Take this pass at normalcy. (Most of Serving From the Hip is structured something like a longform dialogue between the two sisters, so we know that the following words come specifically from Venus.)

They [Mom and Dad] were starting to see that many of the young players were acting outrageous—cussing at adults and throwing their racquets—and getting burnt out by all the stress. Our parents didn’t want that to happen to us.

Everything seems perfectly reasonable here. Indeed, this brief passage manages to subtly and indirectly tap into an intoxicating and universal fantasy: an internally projected reel wherein we dominate our opponent, cool as a cucumber, while sending our defeated foe into a flurry of ulcer-gifting conniptions. This is the essential duality of the message of the Williams sisters: superior tennis ability in symbiosis with superior character.

Much like Phelps, who only undercut the manufactured image of a jolly li’l boy who just loved to swim the more he actually shared about his life (his life largely consisting of yet another harrowing early-AM training regimen), Venus can’t help but turn around in the very next paragraph and undercut the image of the carefree, tennis-playing family of her own construction:

When I was twelve and Serena was ten, our family moved to Florida, where we started to receive professional coaching. On top of going to school, we practiced for six hours a day, six days a week.

Any friends that the Williams sisters made in Southern California, the only home they knew, had to be bid adieu—along with all that pesky free time—the cross-country move in pursuit of tennis domination only coming off as an incidental footnote as Venus tells the story so many years later. The mystifying double standard—that the Williams parents were careful to steer their children away from expletive-filled tirades borne from the stresses of tennis stage-mothering; but nonetheless saw it fit to submit their daughters to marathon training sessions on the daily—seems totally unavoidable, but Serving From the Hip manages to avoid it.

All of these dramatic measures were instituted by father Richard. In the middle of the awesome, insightful 2012 documentary Venus and Serena, Richard brags—or maybe confesses, or maybe he just says it, bland as fact—that he wrote a 78-page master plan detailing how he would elevate his yet unborn daughters into tennis supremacy. While not all the details here totally align (how did he know that younger sister Serena would turn out to be a female so far in advance?), it is true that Venus and Serena do not know of life outside of Richard’s forever watchful eye, Richard who wanted his daughters to play tennis not because he loved the game or even knew the game but because he knew that it was a game where a champion could make a hell of a lot of money playing it.

The reader’s heart trembles at another of Venus’ passages, a passage about romance that doesn’t even appear under Sister Rule #6:

Somebody asked me recently whether I ever think about getting married. I told them that I’m already married—to tennis.

“Then file for divorce!” the reader feels like screaming.

Venus and Serena have received, respectively, the second-most and the most prize money in the history of women’s tennis, with Serena’s 2013 season, including 11 tournament victories, being the most lucrative year in the history of women’s tennis and by a considerable margin. Tennis has already gotten Richard more money than even a dreamer like himself could have dared imagine. And now Venus and Serena are setting records in entirely new categories of the tennis record books. With her tournament victory at the 2014 Dubai Duty Free Tennis Championships, Venus became the seventh-oldest tournament winner in women’s tennis history, a record she can only get closer to as the twilight of her career pleasantly carries on.

There’s no logistically satisfying answer as to why Venus and Serena still put themselves through the physically and spiritually grueling training that’s required to win tournaments. It’s definitely not the pursuit of more money. Their reputations in the tennis community has transformed from bemused skepticism to awed reverence, careers that will be universally acclaimed for decades down the line. There are no white whales that need harpooning—every prominent player on the circuit has ended up on the wrong side of a match point to a Williams sister, and more than once. And Richard, having divorced their mother and remarried with a woman less than half his age, is something of a bizarre sideshow. He certainly no longer sets the schedule.

Maybe Venus and Serena still play tennis because it’s possible to find true love, even in an arranged marriage.