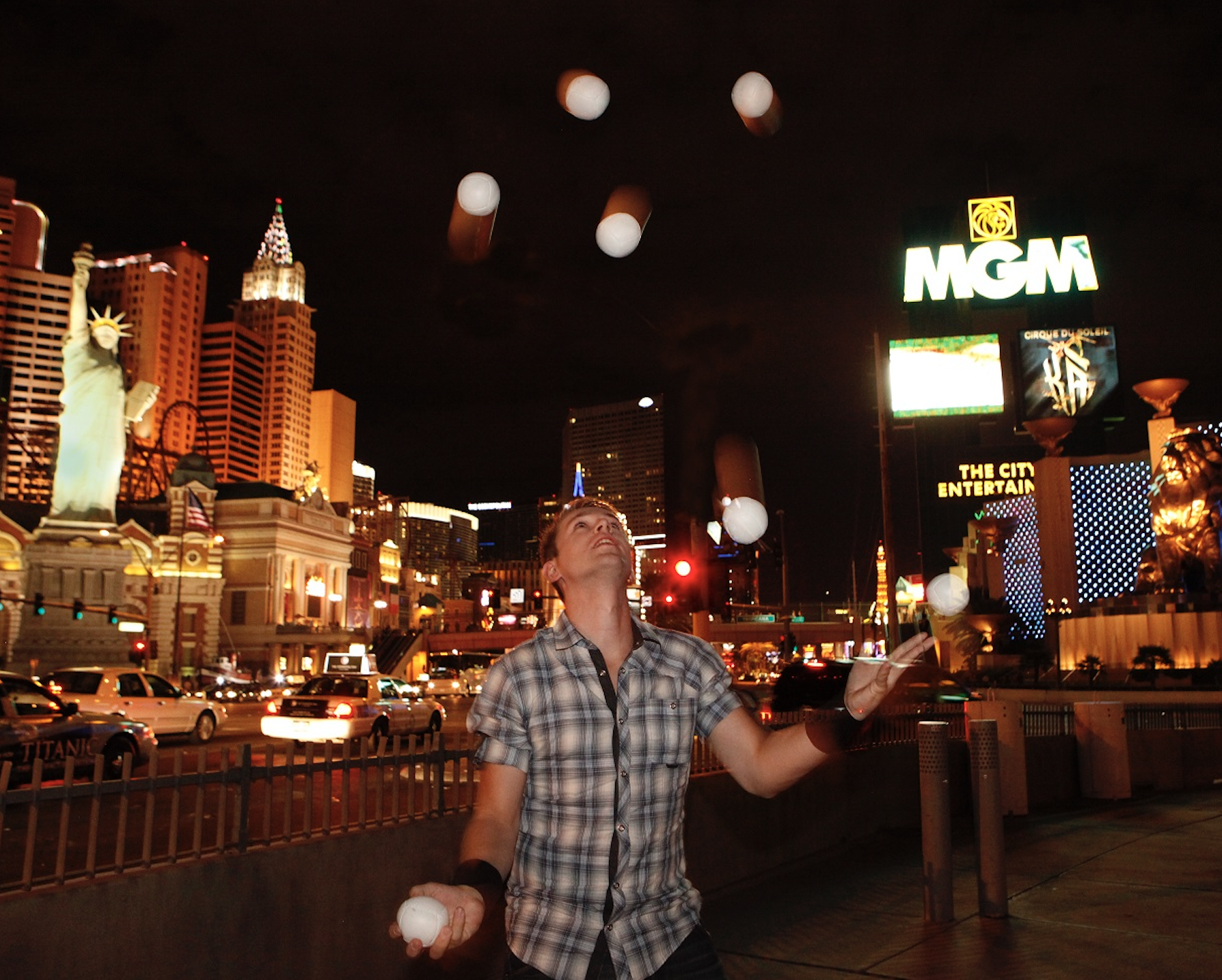 Q: You have a Guinness World Record.
A: Yes, I have the record for juggling the most juggling cups ever. I did 14.

My friend Freddy Kenton is a famous juggler who is now 81 — this was his signature routine. He did it at the Moulin Rouge in Paris fifty years ago. He taught me how to do the routine and I used my mechanical engineering degree to design the juggling prop, which looks like a red Solo cup.

I get more gratification out of that routine than juggling something like a chainsaw. There’s no danger, but to make something that’s not dangerous entertaining is a lot more rewarding, and you get more respect from your colleagues too.

Q: How do you juggle that many cups?
A: I have seven cups in one hand and seven in the other. With a flick of the wrist I push all the cups out, and because of the cone shape, they all fly out at different times. So it’s a big stack of cups in the air, they all do one spin, and they come down again.

It’s on YouTube, if you put in my name and cup juggling, it will come up.

The town where I live, there’s a Guinness World Record museum, and they put one of the cups in their permanent collection.

The cup routine is one of my newer tricks; I’ve been doing it for seven or eight years now.

Q: When did you learn how to juggle?
A: I’ve been juggling for over twenty years. I’m thirty-three and I started practicing every day when I was twelve.

When I was young, there was a street performing festival in Rotterdam and my dad took me there every year. Buskers from all over the world came and I was really intrigued. I went home and I started practicing, but I was eight and I didn’t know how to do the tricks and nobody in my family was a juggler. I tried for two days and then I gave up.

Then when I was 12, there were some shops in the Netherlands where I lived and they started selling juggling supplies. I got juggling balls and juggling clubs and a little book about how to do it, and there were other people in my area who knew how to juggle too.

Q: When did you start to perform?
A: Close to my home there was a small grass field and a couple of my neighbors had a block party with a barbecue. I was thirteen and they asked me to perform, so that was my first gig. I made eight dollars.

Then I got a gig with the kids’ hospital. They had an awards ceremony for a coloring contest and that was my second gig. I had also learned how to do balloon sculpting, so I made like $100.

Q: And it took off from there?
A: Yes, although it was just my hobby back then. There was a kids’ circus in Rotterdam and I joined, and me and one of my friends made some money and had fun doing so. We did small corporate gigs, then bigger corporate gigs, and then after ten years I was twenty-three and I finished college with a degree in mechanical engineering, but I thought that juggling was much more fun.

The week after I got the diploma from college, I was on a Royal Caribbean cruise already.

Q: You were hired on a cruise line?
A: Yes, I did cruise ships for eight years. I went all over the world.

Then I got tired of the ships a bit, because you have to travel so much every week. I had this opportunity to come to Tennessee, and I’m in a city called Pigeon Forge, which is, I guess, a southern version of Las Vegas. Kind of like “hillbilly” Las Vegas.

Dolly Parton is number one in this town. Her company owns seven or eight theaters and I’m in one of those theaters. The one I work at is called the Comedy Barn Theater. It’s my third season here.

Q: How many days do you work?
A: Six nights a week, two shows a day.

Q: Are you alone or part of a group?
A: On the cruise ships I would do fifty minutes by myself, a one-man show with comedy and juggling, in a 1200-seat theater.

Here at the variety show I do comedy and juggling. I do a twelve-minute spot in the first half and then sometimes another spot in the second half. The show has a juggler, a magician, another prop comic, and about five or six different entertainers. And then we have the dancers too. It’s like a full-on variety show.

Q: What do your parents think of this?
A: A lot of people think that with professional juggling, you probably can’t get any further than kids’ birthday parties or working at a mall on a Saturday as a clown. They don’t know there’s an entire world of stuff that you can do with it.

My parents were worried that I would be forty-five and in a shopping mall juggling balls, so in the beginning they were a little skeptical. Over the course of ten years, I started getting better gigs, and my parents slowly saw that it was possible to make a living.

Q: What are some of your more popular routines?
A: I have one routine where I pretend I’m going to juggle knives over a volunteer who is blindfolded. So the volunteer thinks that I’m doing that, and the crowd sees that I’m not doing it. That’s one of the comedy routines that I do every day here.

Of course I’ve juggled bowling balls, knives on the high unicycle, and the chainsaw… I’ve done all that stuff.

Q: It sounds like you enjoy this job.
A: The salary is good, and you see the reaction from the crowd right away. Like yesterday, this one kid, she was probably four, and she said, “Thank you so much for performing for me. It was so fun, it made me laugh.”

Every week we have people come up and say things like that.

You get financial payment of course, but that feels like another kind of payment. It’s kind of hard to beat that response. 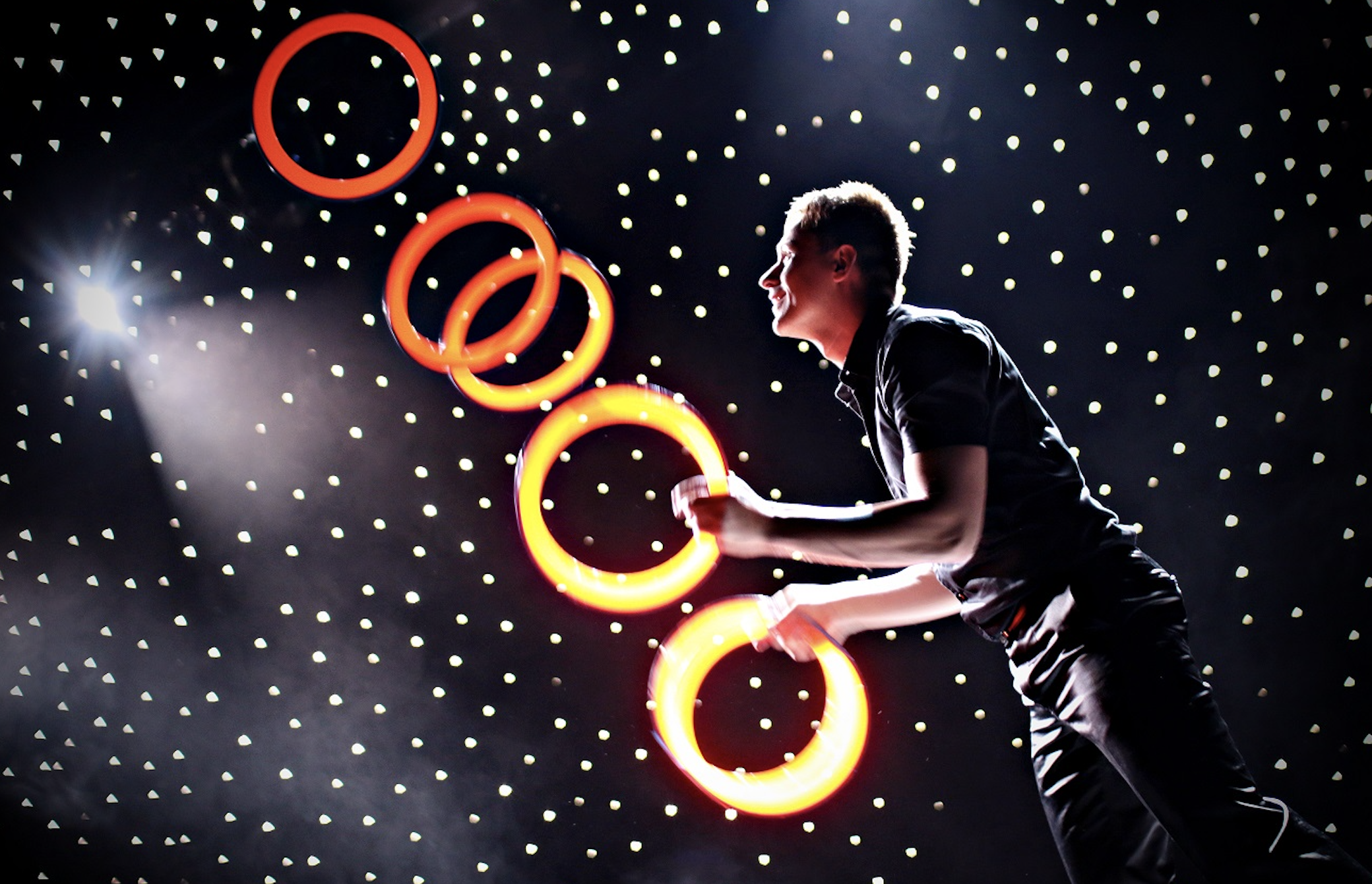