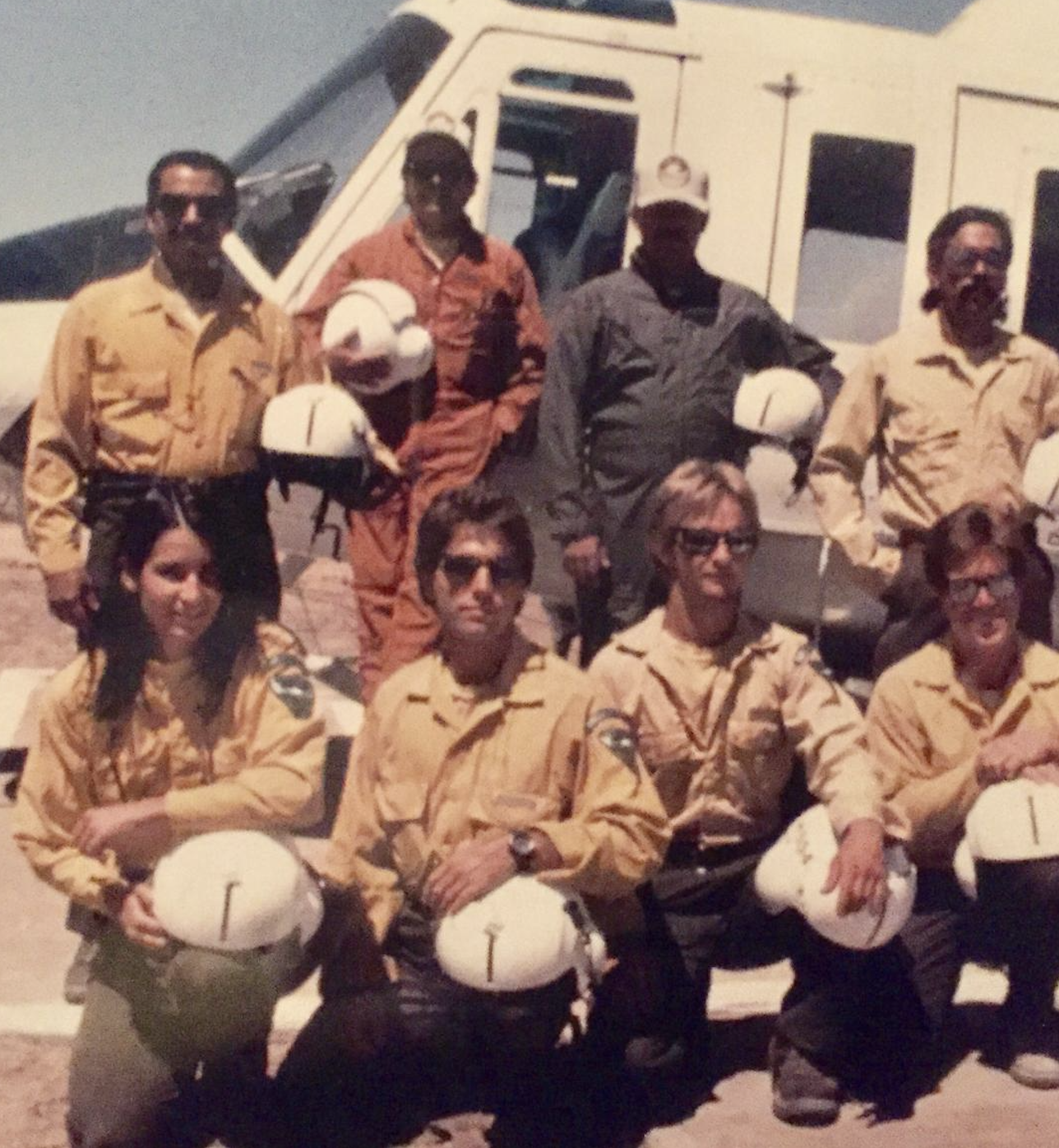 The BLM helicopter hotshot crew. Ruth Nolan is in the front row, on the left.

Q: How did you become a wildland firefighter?
A: I grew up in a remote part of the Mojave Desert. I was a young adult, and there weren’t a lot of jobs. I was hitchhiking to a friend’s house when I saw a sign on a telephone pole for firefighters. I thought, “Wow, that sounds interesting.” It was totally a random thing.

Q: What was the training like? Was it hard?
A: The local community college had a thirty-two-hour basic firefighter training course. The physical stuff wasn’t that hard for me. I grew up in a family of brothers and was an athlete, having been a competitive tennis player growing up and in high school.

Q: Do you remember your first fire?
A: Yes! It was crazy. We were in Victorville, California, and we were taken by bus to a place way out in the desert. It was getting dark, and we could see the fire from the road.

I remember feeling overwhelmed. They were basically pushing us out of the bus and yelling at us to get out there.

As soon as I started working, I didn’t feel scared, though. You get out of your mind and the adrenaline kicks in.

We worked for quite a while. When the fire was dying down, the crew boss said, “We’re just going to stay here until dawn to see if the fire starts again. Try to get some sleep.” I remember distinctly thinking, “Go to sleep up here? On these jagged lava rocks?”

It all felt other-worldly, exotic, and exciting in a way. I was with strangers. It was one other female and me with more than twenty men. Some of the guys were rough. It was a roundup of strange desert people who needed a job, just like me.

All wildfire events are given names, and that first one for me was the Slash X fire, named for a biker bar on the highway nearby.

Q: It sounds a bit scary.
A: I look back like, “Was I just totally crazy?” It’s really scary work. Most people, if there’s a fire coming, they run away. Firefighters run toward the fire.

You could spend twelve, eighteen, twenty-four hours or more working on a fire. On the really big and remote wildfires, sometimes they didn’t bring you back to base camp for days.

Sometimes you worked 6 pm to 6 am, or 6 am to 6 pm. Many times I was working all night, which was a surreal experience.

I actually worked on a huge fire in the vicinity of the Mann Gulch fire that killed thirteen men in 1949. At the time, I had no knowledge of the fate of the earlier crew. I had a very eerie, surreal experience one night on an all-night shift up in those mountains. We were assigned to hike to a “creek” and start cutting fireline there. It was pitch black, and we hiked and hiked and never found the creek. We kept hearing the sounds of a crew of men singing and working together with their tools… Of course, there was no crew. Just us.

Q: Did you always work on these ground crews?
A: In 1987, I joined a BLM helicopter hotshot crew, which was extremely hard work.

Q: I wish I had a job where someone called me a hotshot.
A: I know, it was a real rock star job.

Sometimes we would fly into airports large or small, disembark from the helicopter, and walk into the terminal in our fire uniforms. It was a great feeling, especially if we had stopped a nearby fire from getting really big and threatening homes and lives. I didn’t feel arrogant about it, I just felt proud about a job well done. We put out a lot of fires before anyone even knew about them.

Q: Did you ever have any close calls?
A: Yes. All the time.

There are ten standard orders of firefighting, and one of them is to always have and know your escape route.

We were fighting a major fire once, going downhill, and the fire burned up and over our escape route. They were going to try to airlift us out, but they couldn’t. We gathered in a small cleared area and waited out the howling, hot firestorm burning around us, and most of us prayed.

Q: What kind of equipment did you use?
A: I used my Pulaski a lot. It’s like a two-headed ax. One side is an ax, and one side is a grubbing tool, which I think is called an adze. I developed a really close working relationship with my Pulaski. Literally, my life depended on it!

Part of our job when we were not fighting fires was to maintain our tools, and I had the Pulaski in my living room.

I had two different boyfriends who I met on the fire crew. One kept his chainsaw in our living room.

Q: What was it like being a woman on the crew?
A: There was sexual harassment, but it could also be romantically tinged. There were a lot of good-looking guys on the crew!

There are a lot of women who do this work, too, and I’m happy to help give a voice to that. There are women, women of color, people of color… My friend Betty Ashe is an African-American woman and career firefighter who ran the Mojave Greens crew and served as a forest service Battalion Chief.

There are a lot of success stories, a lot of inspiration. There are two all-women convict crews based in California — they are really badass. And I once worked alongside an all-women Native American crew out of New Mexico.

Q: What made you leave this job?
A: I became pregnant with my daughter at age 24, and I had started to realize how dangerous the work was. I was never seriously injured; I was very lucky.

However, I miss fighting fires! Every time I see a fire I want to be out there working on it. I miss the excitement, the teamwork. You’re doing something very intense, raw, visceral, life-changing. It’s a portal to another dimension.

Q: It seems like you have nerves of steel.
A: I must.