The liberal establishment hoisted its Bordeaux glasses high earlier this month when Comrade Obama waffled on his nearly assured commitment to approve TransCanada’s Keystone XL Pipeline, which would transport more than 800,000 barrels of tar sands oil per day from Alberta to coastal Texas.

Liberals’ objections to this vital infrastructure project are numerous, tired and ill informed: Tar sands oil is dirty; extraction pollutes the water supply and destroys forests; a pipeline explosion could wipe out a colony of genetically distinct prairie dogs; the oil revenues won’t be dedicated to a scholarship fund to send transgendered Muslims to college.

Enough. In the demented mind of the modern liberal, anything that is good for the economy must be bad for everything else. This is the same group of clowns that thinks we should give a brain scan to every steer because some loser in England contracted Mad Cow Disease. Everything is a danger. Everything will kill us instantly. Everything is the fault of avaricious big business. If the world were left to liberals, our firearms would send a note to our mothers asking for permission before we were able to fire each shot.

Once liberals decide they are against something, such as soldiers, light bulbs or freedom, they are relentless in their zeal to destroy it, and that has now happened with Keystone XL. That the left has made the tarring of tar sands a centerpiece of their party platform is evident from the first page of this comic book that the environmental locusts at ILoveBears&Seals.com designed to spread their rainbow propaganda to children: 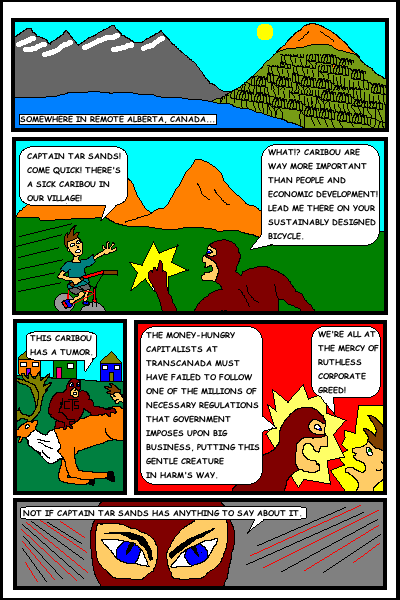 Before we succumb to these hysterical denunciations from the windmill-hugging left, we should actually analyze the facts about this supposedly malicious tar sands oil. We have outlined below a number of popular fictions about tar sands, followed by a clarification of facts to demonstrate that the bulk of concerns regarding the pipeline amount to hysterical overreach:

Fact: Liberals bash oil as though it were some odious manmade concoction foisted upon humanity by industrial ogres. Newsflash: oil comes from the same place as organic carrots and polar bears—nature. That we can self-select what is good and bad from Mother Nature is one of the most transparently hypocritical attributes of the increasingly obtuse environmental left.

Fiction: For every barrel of tar sands oil extracted from the ground, three barrels of undrinkable, filthy water is dumped into toxic tailing ponds, which are at danger of leaking into the water supply.

Fact: This water is perfectly useable. Just take a look at the photograph below of an enterprising fast food restaurant manager in Nebraska mixing a barrel of this liquid miracle into his 99-Cent Soup Surprise before a recent lunch rush: 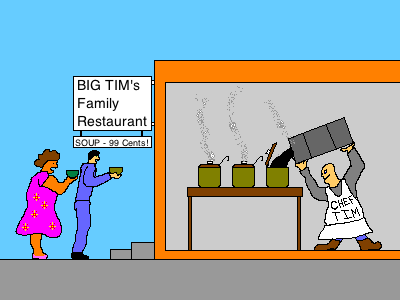 Fact: I suppose we should have a funeral for every tree we cut down, invite all of its friends to offer remembrances, hire a hearse, and drive through the forest in a long mournful line while a band plays Amazing Grace. Then we can offer government-funded grief counselors to help the community cope with this great and tragic loss. Or we could realize that no one over the age of 4 cares about stupid trees and get on with our lives.

Fiction: Indigenous communities in the tar sands region are losing their land to oil extraction or becoming sick from living downstream from tailing ponds.

Fact: Do these people ever shut up? Memo to Canada: We figured this one out in the U.S. about 150 years ago—give these whiners a casino and a couple of liquor stores, and the problem will solve itself.

Fiction: Given the frequency of pipeline spills and the sensitive environmental areas that the pipeline would pass through, it is almost inevitable that Keystone would at some point cause a manmade disaster detrimental to local drinking supplies.

Fact: Why are we so worried about water purity when modern industry has concocted far more delicious things to drink? Ever heard of Coca-Cola? Or Gatorade? Seriously, do you know a single person who actually drinks water out of a tap? Gross. If anything, we should be intentionally contaminating drinking water supplies so that large beverage corporations can reconfigure our liquid delivery infrastructure to enable healthful Sprite to tumble from our kitchen spigots.

Fiction: It is far dirtier to refine tar sands oil than conventional crude, resulting in higher emissions of toxic sulfur dioxide and nitrous oxide around the U.S. refineries that would process the oil.

Fact: Did we mention that this oil is being sent to refineries in Texas? In the event that testing shows an excess of one toxic substance or another, we’re fairly confident that the state’s business-friendly legislature will simply redefine acceptable levels of these substances upward, protecting both local residents and the oil business.

While the money-hating left would very likely reconsider their extremist opposition to the pipeline should we elect to build it entirely with a unionized workforce of minority homosexuals who illegally immigrated to our nation to have abortions, such people would have a difficult time fitting a 40-hour workweek into their busy schedule of collecting welfare checks, not learning English, and dismantling the fundamental values of this country.

However, we at APMAG have proven that we are open to compromise when the ultimate outcome is best for the nation as a whole, as demonstrated when we joined the left to install a ban on Triple Venom Double Exploding Bubblegum1 or proposed The Child Labor Freedom Act of 1992.2 With a liberal president in the White House and a coterie of environmental interest groups angling as fast as their electric cars will take them to kill this invaluable infrastructure project, we have no choice but to offer a compromise.

We hereby propose the APMAG Grade School Gats for Gas initiative: for every mile of pipeline that Fuhrer Obama allows to be built through the United States, APMAG and a coalition of philanthropists will donate one gun range to a local grade school. This innovative program would solve two problems simultaneously, one from each side of the political spectrum: this vital oil project would begin at once, and liberals would no longer have to fuss over the school shooting epidemic, as children ages five to ten would finally get the formal regimented firearms training that local communities are demanding. Each child would be trained in marksmanship, maintenance, technique, evasive maneuvers and Muslim-hating, and would receive their very own AR-15 upon graduation.3

One thing should be made clear: TransCanada is extracting this oil, pipeline or no pipeline. Should liberals ignore this entirely reasonable compromise and continue their irrational opposition to Keystone XL, TransCanada will simply find another way to transport this oil away from the Alberta wilderness, most likely using coal-powered disused windmills operating on roads paved with four-year-old racehorses slaughtered immediately after their performance on the track diminished. In fact, a pilot project is already under way in a remote section of North Dakota: 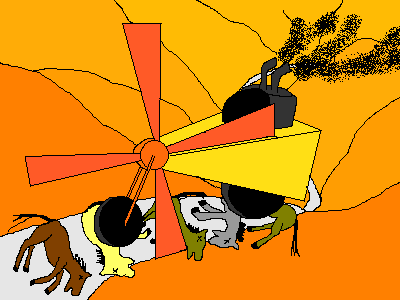 This so-called president has a choice to make between economic development and continued voluntary stagnation. We strongly recommend that he approve the Keystone XL pipeline at once.

1 Triple Venom Double Exploding Bubblegum was a product introduced by a cleverly enterprising U.S. confectionary in the mid-2000s. Marketed to children as a fun alternative snack, the bubblegum tended to explode inside the mouths of approximately one in six people who chewed it, occasionally decapitating them. While the left seemed opposed to this product on health and safety grounds, APMAG objected to it for much more practical reasons: because each package contained such a large volume of deadly snake venom, the gum was removing this valuable resource from the supply chain, preventing the armed forces from manufacturing the poison-tipped blow darts that have become an indispensible tool in the War on Terror.

2 The Child Labor Freedom Act of 1992 would have redefined child labor laws to prohibit kids under the age of 7 from working between the hours of 9 a.m. and noon during school days from November through March of each year. This sensible legislation would have freed older children to enter the labor force while still ensuring a reasonable window of learning for our youngest citizens. This proposal was of course dismissed by liberal elites as “anachronistic rabble,” which is an interesting way to characterize a law that would have been both pro-business and pro-child.

3 This initiative would also make great progress toward fulfilling Agenda Item 27 in APMAG’s United States Liberty project: having a fully militarized society by 2021. These institutions would serve as model schools for similar programs across America, ensuring that every child in the country was fluent in the use of deadly force with a firearm before they enter junior high school.